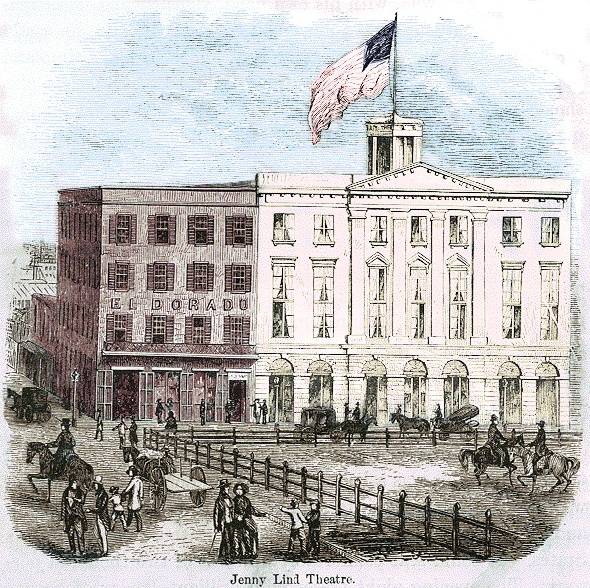 The Jenny Lind Theatre and the El Dorado gambling hall and saloon. The Jenny Lind was at the center of a scandal in 1852 when it was proposed for use as a city hall.

1851, OCTOBER 4th--Opening of the new Jenny Lind Theatre on the Plaza. This was a large and handsome house. The interior was fitted with exquisite taste; and altogether in size, beauty and comfort, it rivaled the most noted theatres in the Atlantic States. It could seat comfortably upwards of two thousand persons. The opening night presented a brilliant display of beauty and fashion, and every part of the immense building was crowded to excess. A poetical address was delivered on the occasion by Mrs. E. Woodward. A new era in theatricals was now begun in San Francisco; and since that period the city has never wanted one or two first class theatres and excellent stock companies, among which "stars of the first magnitude annually make their appearance. Before this date there had been various dramatic companies in San Francisco, but not before had there been so magnificent a stage for their performances. The "Jenny Lind" did not long remain a theatre. The following year it was purchased by the town for a City Hall for the enormous sum of two hundred thousand dollars. The external stone walls were allowed to stand, but the whole interior was removed and fitted up anew for the special purposes to which it was meant to be applied.

1852, JUNE 4th--The purchase of the new Jenny Lind Theatre and Parker House for the purposes of a City Hall was another of the common council jobs which excited very much angry discussion at the time, and which afforded interesting and amusing "matter" for the newspapers (the "Jenny Lind Swindle," or sometimes Juggle they facetiously called it), during half a year. The old City Hall having been destroyed in the fire of 22d June 1851) the various municipal officials were compelled to get business chambers where they could, for which very high rents had to be paid. As the different public offices were now located in separate parts of the town, much inconvenience was experienced. This arrangement could only be temporary. The rents, which were somewhere about forty thousand dollars per annum, formed a heavy tax upon the public; while ground could be bought and a proper building erected by the city itself for about four or five times that amount. Several desirable sites could be had in the town on moderate terms, and responsible contractors were ready to undertake the construction of the proposed building at fixed rates which would certainly have reduced the total cost below two hundred thousand dollars. In these circumstances, the common council, for reasons, as the saying is, best known to themselves, and in spite of the indignant cries of the citizens, and the general remonstrances of the press, determined, in conjunction with the board of supervisors of the county, who were to pay half the cost, to purchase the Jenny Lind Theatre, and convert it into the proposed City Hall. The purchase money of the building as it stood was to be $200,000; while to remove all the inside walls, leaving only the outer ones standing, and to build up the interior anew, properly fitted up for municipal purposes, was believed to involve the expenditure of nearly half as much more. At the same time, it was supposed that the building when so altered would be only a miserable structure at the best. An ordinance authorizing the purchase was passed by large majorities in both council boards, and sent to the mayor for approval, which was refused. Notwithstanding, the common council, on the 4th June, re-adopted the obnoxious ordinance, and passed it by a constitutional and almost unanimous vote.

Meanwhile, the public wrath was growing very clamorous, the more so perhaps that it was impotent. On the evening of the lst of June, one of the usual mass and indignation meetings was held on the plaza, where the proposed purchase was passionately denounced. Mr. William A. Dana presided on the occasion. This was one of the most stormy meetings that had ever been held in the city. Hon. David C. Broderick, who was in favor of the proposed purchase, attempted to make a speech for his cause, but the noise and reproaches of the meeting effectually put him down. Sundry squabbling and wordy sparring took place between Mr. Broderick and Dr. J. H. Gihon, who was on this occasion the people's orator; and the meeting ended in hubbub, riot and confusion. Little cared the common council for such proceedings--the general ire--the mayor's veto--the denunciations and ridicule of the press. The matter was carried finally into the Supreme Court, at the instance of some public-spirited citizens, and shortly afterwards a judgment was obtained recognizing the right of the city and the board of supervisors to make the purchase. This was forthwith done, and the contemplated alterations were speedily made on the building, although at a great expense. The whole affair was long a prolific subject for conversation and discussion, for ridicule and the imputation of corrupt motives. It served to glorify the council of this year, as the notorious aldermen's salaries and medal pieces of business had immortalized a previous party of "city step-fathers."

After the purchase was made and the alterations were completed it was found that the new structure answered the purposes intended better than was at first anticipated. The situation is excellent. At the present time, however (1854), it is beginning to be discovered that the building is too small for the increased business of the city. Movements are now making to purchase additional business chambers elsewhere, or to include a portion of the adjoining Union Hotel into the municipal establishment. Doubtless, before many years pass, the whole of either that building, or of the El Dorado gambling-saloon on the other side, if not both, will be required for the necessary extension of the City Hall, unless indeed it be located in some altogether different quarter, and built anew.