The Annals of San Francisco 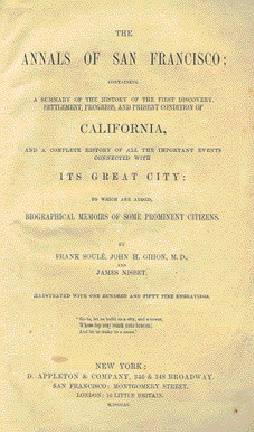 The Spaniards had scarcely proceeded any way in the great work--if they had not rather retarded it--when the Anglo-Saxons, the true and perhaps only type of modern progress, hastily stepped in, and unscrupulously swept away both their immediate forerunners as effete workers, and the aborigines of the land all as lumberers and nuisances in the great western highway of civilization. This highway is fated to girdle the globe.

The Annals of San Francisco, written by Frank Soul, John H. Gihon and James Nisbet and published in 1855, constitutes the most important primary source of information regarding the Gold Rush period and the formation of the city. The sources of information for the Annals came primarily from the following newspapers: the Californian, the California Star, the Alta California, the San Francisco Herald and the California Chronicle. As their second main source of information the authors mention people from their own class, that is prominent Anglo-Saxon citizens such as Thomas O. Larkin, J.D. Stevenson, Samuel Brannan etc. As such, the Annals, the first history of the city, is really a victors' history, as most are, reflecting the views and opinions of the dominant class, the white, male Anglo-Saxons who controlled commerce and communications and ran most of the city affairs.

The Annals, as a historical document, is interesting precisely because it offers a rich account of the American or Anglo-Saxon mentality at the times. This intellectual frame of reference was based on a belief in American imperialism or "Manifest Destiny," (the colonization of California likely being the best confirmation of its validity for the authors), adulation of the American work ethic and commerce, and a deeply entrenched racism. The authors justify everything through the prism of the civilizing mission of the Anglo-Saxons from the annihilation of the Indians to the colonization of California. The following passage from the Annals provides a clear summary of the Anglo-Saxon racist and imperialist mentality so common at the time:

"But another race was destined soon to blow aside the old mists of ignorance and stupidity, and to develop the exceeding riches of the land, which had lain, undisturbed and concealed, during so many ages. The Spaniards had scarcely proceeded any way in the great work--if they had not rather retarded it--when the Anglo-Saxons, the true and perhaps only type of modern progress, hastily stepped in, and unscrupulously swept away both their immediate forerunners as effete workers, and the aborigines of the land all as lumberers and nuisances in the great western highway of civilization. This highway is fated to girdle the globe, and probably, in the course of a few centuries, will join the original starting-point in the natal home of the "Pilgrim Fathers" in old England. The "pioneers" of California are our "Pilgrim Fathers," and there need be not the slightest doubt but that the empire, or rather the great union of peoples and nations in the Pacific will soon--perhaps in fifty years, perhaps in a century--rival, if not surpass the magnificent States of the Atlantic. Indians, Spaniards of many provinces, Hawaiians, Japanese, Chinese, Malays, Tartars and Russians, must all give place to the resistless flood of Anglo-Saxon or American progress. These peoples need not, and most of them probably cannot be swept from the face of the earth; but undoubtedly their national characteristics and opposing qualities and customs must be materially modified, and closely assimilated to those of the civilizing and dominant race. The English in India have already shown how a beginning may be made; the Americans, on the California coasts, and farther west, will still more develop the modern system of progress. People may differ in opinion as to the equity of the particular steps attending the process, and many honest folk may even doubt its ultimate benefit to mankind; yet that some such grand result will hereafter be evolved from the energy and ebullition of the American character, and from the peculiar circumstances of American position in the world, must be evident to all who take a dispassionate and unprejudiced view of the matter."

Some of the passages of the Annals, particularly those regarding the Indians and Chinese, might be disturbing even to contemporary readers for their blatant racism and for providing an intellectual justification of the Indian genocide. The American racism of early San Francisco was based on a precise racial scale with, of course, the Americans at the top, then the English and Germans, the French, the Italians, the Hispanics, the Chinese, the blacks and at the very bottom the Indians. Here's how the Annals describe Indians: "The Indian population attached to the missions were meanwhile becoming an industrious, contented and numerous class, though indeed, in intelligence and manly spirit, they were little better than bestias--beasts, after all." For the Chinese: "Of different language, blood, religion and character, inferior in most mental and bodily qualities, the Chinaman is looked upon by some as only a little superior to the negro." And finally: "The Hispano-Americans, as a class, rank far beneath the French and Germans. They are ignorant and lazy, and are consequently poor."

Paradoxically, despite this brazen racism, the authors of the Annals have an admiration for the amazing mix of populations and customs triggered by the Gold Rush and which constituted one of the most interesting characteristics of San Francisco. The Annals repeatedly describes with astonishment and enthusiasm the cosmopolitan folklore and strangeness of the place, truly unique in the United States, and in the world for that matter. There are also passages where the Annals recognize the qualities of some of the different populations constituting the city and a few rare instances when the authors recognize the misery and pain that was inflicted on the Indians and other minorities.

In spite of its biases, the Annals is the most complete single source of information regarding the birth and development of early San Francisco. The Gold Rush, which began in earnest in the winter of 1848-49, transformed San Francisco from a sleepy little village into an instant city. At first, in 1849, the city was in fact a giant encampment made up of tents, shanties and abandoned ships (as soon as ships arrived the crews would desert to the mines) as nobody devoted any time to building permanent buildings and thought only of digging gold and making money. Everybody was engaging in commercial activities and vying for a share of the mining wealth. Most people, of course, did not end up wealthy, and those who gained the most were real estate speculators and merchants who supplied the mining goods.

Gradually, the encampment became a city. Between December 1849 and June 1851, six serious fires destroyed major segments of the city. After each fire, the people of San Francisco built back their residences, each time in a more durable way. Thus by 1851, the city had acquired a more permanent state and people seemed to be less frenzied. Describing the evolution of the city between those years, the Annals compare San Francisco in 1849 to a great anthill, when its busy creatures happen to be disturbed, and when all were visible, hurrying to and fro, out and in, backwards apparently in the most admirable confusion and forwards and cross purposes, as if every one were engaged in some life and death struggle. A few years later, the situation seemed to be much more orderly: In 1851, the city was like the same ant-hill when the cause of fright had been removed and order restored. The old tenants were still as busy as ever, but there was method now in their actions. Some were closely engaged in the interior--the cells or houses of the place--and made no show. Outside, lines of other eager workers ran here and there, without jostling or confusion, all filled with the thought of what they had to do, and doing it well and quickly. Of course the development of the city, however, did not occur without major growing pains. Along with the Gold Rush and the development of capitalism came much violence, loneliness, organized theft and corruption, commercial speculation and death; all of which the Annals--to its credit--does not shy away from describing.

And so in the end, the San Franciscans who came only to make quick bucks and return home ended up building a city for themselves. For, as the Annals so rightly stated and with words that ring more true than ever, in San Francisco "There was no sauntering, no idleness, no dreaming. All was practical and real; all energy, perseverance and success. In business and in pleasure, the San Franciscans were fast folk; none were faster in the world. Their rents, interest on money, doings and profits, were all calculated monthly. A month with them was considered equal to a year with other people. In the former short time, men did such deeds, and saw, felt, thought, suffered and enjoyed, as much as would have lasted over a twelve-month in other lands. But then these were really men--giants rather, the very choice of the cleverest, most adventurous and hard-working people of America and Europe. California was a hot-bed that brought humanity to a rapid, monstrous maturity, like the mammoth vegetables for which it is so celebrated. "