The Gill Tract: An Unfinished Fight for Land and Learning

by Students for Engaged and Active Learning (SEAL), 2015

The Gill Tract Farm is the last remaining 20 acres of historic farmland in the East Bay, owned by and located near the University of California, Berkeley in Albany. It has a long rich history, and the people who have lived, farmed, taught, and dreamed upon its soil have endured dispossession, silencing, and repression. The struggle for this land is a long but worthwhile one, and while it continues, the Gill Tract serves as a symbol of hope and resilience against the privatization of land, knowledge, and education. 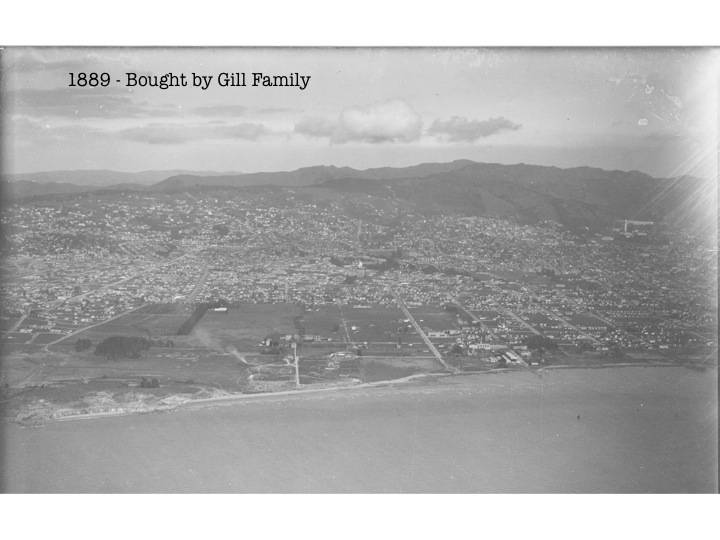 This land was violently stripped of the indigenous people of this area through colonization. The Ohlone, or Costanoan, people built their livelihoods upon the land between the Carquinez Street and Monterey. The Spanish arrived in the late 18th century, and with the establishment of Mission San Francisco across the Bay they bought disease and forced culture. Mission records indicate that the indigenous people of this region were relocated, sometimes forcibly, to mission San Francisco, and following the secularization of the missions in 1833, worked as manual laborers in ranchos.

On August 3, 1820, Luis Maria Peralta received the Rancho San Antonio land grant for his service to the Spanish government. The 43,000-acre Rancho San Antonio contained the future sites of Albany, Oakland, Berkeley, Alameda, and parts of San Leandro and Piedmont. Peralta’s grant was confirmed after Mexico’s independence from Spain in 1822, and honored by the Treaty of Hidalgo in 1848 when California became part of the United States. Peralta’s son, Jose Domingo, received the northern portion of the rancho, which included the location of what is today Albany and Berkeley. The Gill Family acquired the land in 1889, and it was used for various farming projects, a nursery, and an arboretum. Though it was originally over 100 acres large, it was gifted, sold, and leased by different projects over the course of the century including military housing during World War II. In the mid 1970s, following Reagan’s austerity governorship, there was the first mention of a “Regional Shopping Mall” to be built on the “Northeast sector” of the Gill Tract. However, this was not possible at the time because of the strength of the world-renown Biologic Control Research Station. Starting in 1945, there was a famous Center for Biologic Control on the site where research on how insects and ecological systems could be integrated into pest management was taking place. At a time when pesticides were taking off, and the culture within the University was “better living through chemistry”, this center was an important node in the fight against industrializing agriculture that endures today. This research was an inspiration to many in the emerging environmental movement, including Rachel Carson, and bolstered the anti-pesticide movements. 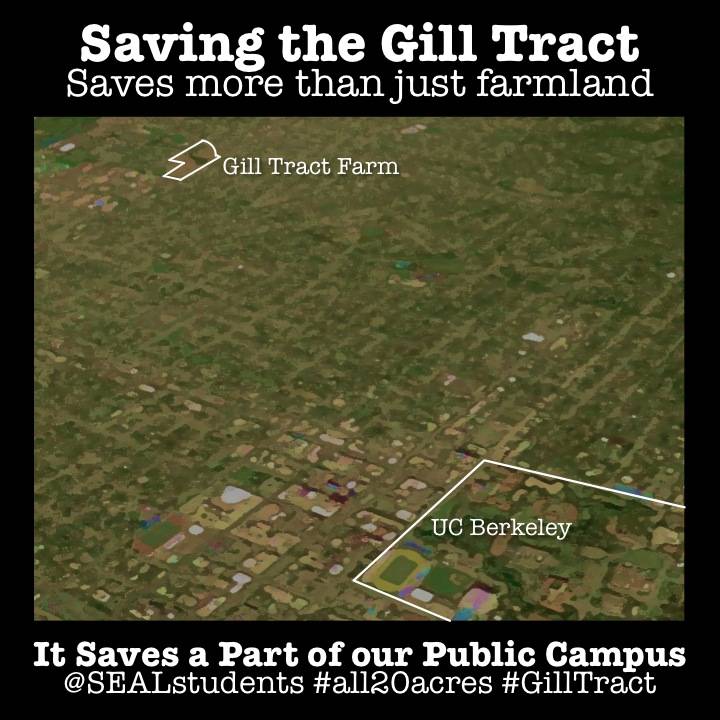 However, this center was actively dismantled by the University between the late 1970s to the 1990s in result of pressures within the University from the pesticide industry and because of the interest in attracting more corporate donations. This transition from Biologic Control to research for the benefit of petrochemical interests and industrial agriculture came to an apex in 1997 when the department of Plant and Molecular Biology received a $25 million donation from Novartis. This sparked indignation and active protest on campus, notably from Professor Ignacio Chapela, who had witnessed the impact of GMOs on corn crops across Mexico and knew deeply what it would mean for our research to be bought by a biotech corporation. After speaking out, Professor Chapela was scandalously denied tenured directly by the Chancellor (he eventually received tenure through a vigilant and unyielding mass mobilization).

Over 15 years later, petrochemical corporations continue to have a large hold on the University, as exemplified by the BP building on campus, and Professors continue to be silenced. Professor Tyrone Hayes has been targeted by the pesticide industry because of his outspokenness on his findings on the toxicological impacts of Atrazine. Well-known Agroecology researcher, Professor Miguel Altieri, has also been repeatedly intimidated, especially following his support for activism on the Gill Tract.

The struggle for free speech continues to live on 50 years after the Free Speech Movement on campus, and academic freedom is just one form of speech that is continuously threatened by the privatization of the University. After Capital Projects made their initial plan back in 1997, a coalition of 30 community groups and many UC Professors (including Ignacio Chapela and Miguel Altieri) put together the BACUA proposal advocating for the use of the space for an Urban Agriculture Research station. Over the decades, different iterations of community and student groups kept up the fight from city council meeting to city council meeting, and while they were very effective at stalling, the project kept moved along through the system. Capital Projects points out all of the opportunities that the community had to give comments on the proposal- but they do not highlight the fact that at these meetings there was significant community opposition to the project. While Capital Projects has ostensibly made opportunities for the community to voice its opinion, it has not listened to this opinion. For example, in 2012, there was a community referendum with over 1000 signatures from local neighbors and Albany Residents, gathered in just two weeks, who wanted to put the development agreement to a public vote. Capital Projects threw out the development agreement, an inessential part of the development plan, and so the project was never put to the vote that local community members democratically called for. 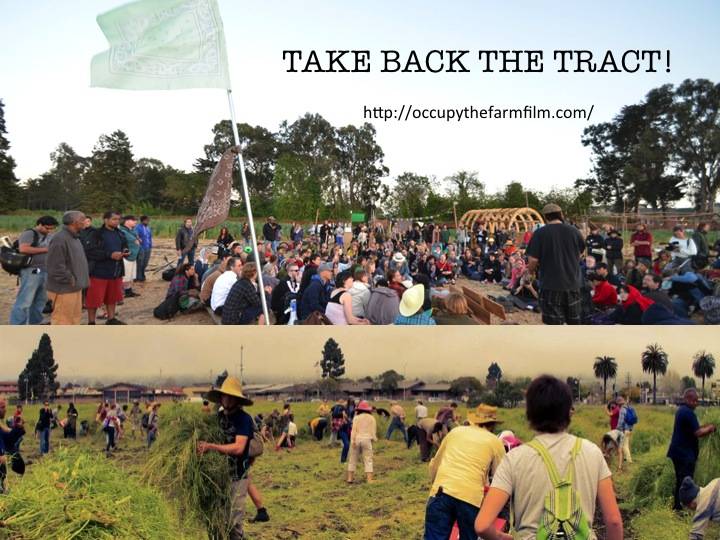 In 2012, inspired by the Occupy movement, a community group including former Berkeley students, taught under Miguel Altieri, created “Occupy the Farm”. On Earth Day, 2012, OTF led a high profile act of nonviolent civil disobedience by breaking the locks at the Gill Tract, planting a large plot of the land, and setting up an encampment to defend the crops. Their actions directly led Whole Foods, the corporate grocery store that planned to build on the farmland, to cancel its lease, one acre of the Gill Tract is now protected a community-driven and collaborative garden for 10 years (from 2012). A documentary, Occupy the Farm, was filmed and released internationally about their efforts.

The part of the Gill Tract that operates as a community farm produces seasonal produce that is free to everyone, provided to the community at a weekly farm stand and to the Berkeley Food Pantry for students. Sprouts Farmer’s Market and a high-end senior care facility have been approved for development upon just over 5 acres of the Gill Tract, and the fight for all 20 acres continues. The Gill Tract is an important part of the UC Berkeley campus, and yet student needs for research and education have been continuously ignored in this development project. In 2014, a group of passionate students formed Students for Engaged and Active Learning (SEAL), a campus group representing student need for experiential and hands-on learning, and therefore, permanent protection for the Gill Tract. SEAL’s work to hold UC Berkeley accountable to its mission and halt the development plans have taken numerous forms, including the formation of a petition that has gained over 2,500 signatures and an act of civil disobedience through which they demanded a meeting with Chancellor Nicholas Dirks. Clear and constant opposition has fallen upon deaf ears, and the University’s failure to provide transparency in its decision making and meet the needs of its students reveals its increasing privatization.

On February 26, 2015, UC Berkeley mandated the destruction of 60 trees, many of them rare and over a century old, the first step of development. Defense of this soil is more important than ever, and SEAL and OTF continue to work in opposition of the development plans.

The Gill Tract is living, carbon-sequestering history in a time of climate change injustices and privatization. 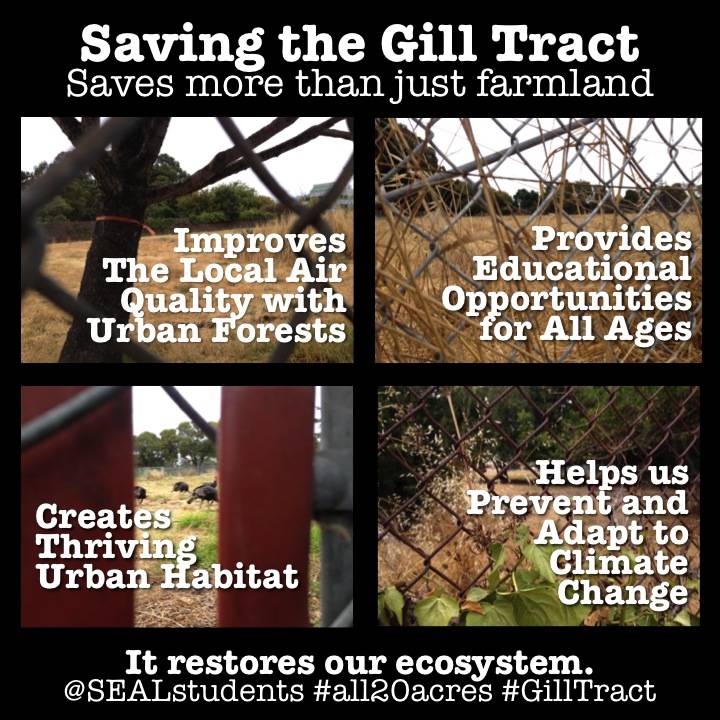