Part One by Will Roscoe 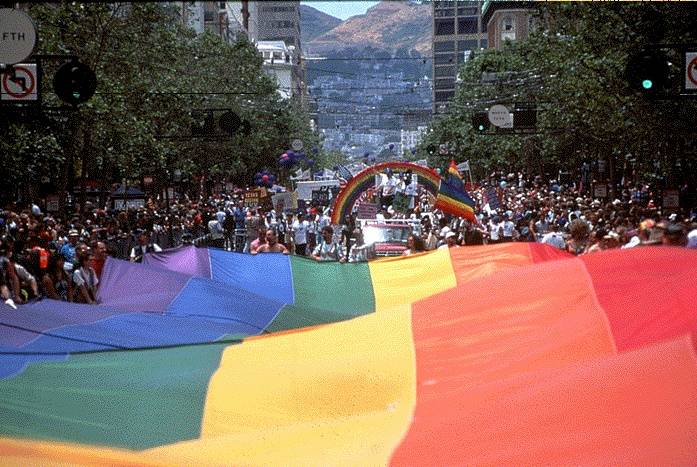 In this brief history of gay liberation in America, two themes have repeatedly emerged, those of movement and community. The gay movement and the gay community are not identical. While they appeared and have developed in tandem, they have not always converged.

Unlike ethnic minorities, gays are not born into a community; rather, they must create a community and continually re-create it throughout life. Community is important because it is the foundation for political action in the history of minorities. Individuals must have a reason to take risks, to pursue their grievances in the face of a hostile majority. For lesbians and gay men, community provides that reason -- it is the safe and nurturing space which makes coming out possible, imaginable and desirable.

The crisis of AIDS throws the themes of community and movement into sharp relief. Clearly, our rights are threatened by the reaction to AIDS. And clearly, an active grassroots movement of gay people, willing to take risks to protect their rights, offers the best hope for countering anti-gay forces.

Less clear, however, is the continuing need for building community. Despite the debates on the possible causes and factors involved in AIDS, nearly everyone agrees on the best course of action to prevent the disease. That is, to lead a healthy, balanced lifestyle, maintain a high self-image, and avoid exposure to infection. Nevertheless, as AIDS-phobia grows, public officials and gay political leaders alike are turning to negative sanctions against gay behavior. The move to close gay baths and other meeting places is a direct threat to the most basic gains achieved by the movement in the 1960s.

The theme of community is at the center of this debate because it represents the positive alternative to negative sanctions. The positive approach, directing our energies and resources toward fostering a conscious, mutually supportive community, is not new---any more so than the call for a participatory and grassroots gay movement.

Gay history provides inspiration to face today's challenges: in the courageous efforts of individual lesbians and gay men to forge networks of support in the face of brutal harassment; in the struggles to create gay organizations under the nose of McCarthy and his anti-gay witchhunt; in the Mattachine vision of a community based on a conscious set of values; and in the prophecy of Walt Whitman who saw in the experience of gay love a model of mutuality and equality that contained the essence of the democratic spirit.

For any who might doubt the capacity to transform adversity into triumph, gay history remains a source of strength and ingenuity, available to all who seek inspiration for the next future we create for ourselves.

On June 5, 1981, Morbidity & Mortality Weekly announced the mysterious presence of Pneumocystis carinii pneumonia in five gay men. July 3 marked the first public news of what was to become known as AIDS, as the New York Times published the first article on "the Gay Cancer," Two days later, Morbidity & Mortality Weekly announced the outbreak of Kaposi's Sarcoma among 26 gay men in the U.S.

"In the aftermath of a major fire along San Francisco's Folsom strip in 1981, the media was quick to indulge in hostile voyeurism, and leatherfolk got burned in more ways that one. The apartment of photographer Mark I. Chester was partially damaged, and the press took this as an invitation to enter and publish a photo of his bondage equipment. The fire department set up a temporary morgue for the bodies of the chained and incinerated sex-slaves it expected to find (it did not)."

JACK: Somewhere in the early '80s -- I guess it was '81 -- one of the big, final blasts of this whole sexual abandon was at the Handball Express, down on Harrison, just off of Sixth Street, they had a party -- it was a hospital party -- for sick men.