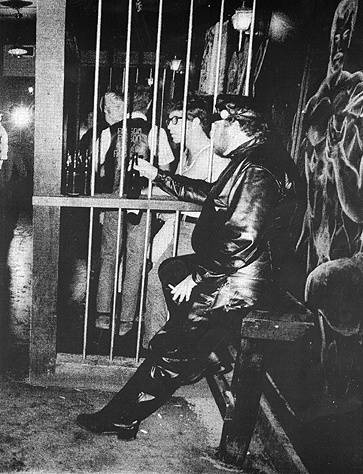 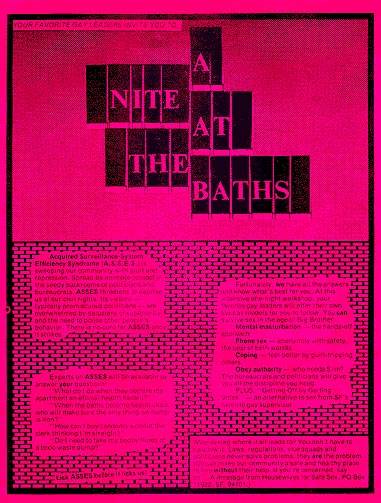 Experts on ASSES will be available to answer YOUR questions: "What do I do when they declare my apartment an official health hazard?" "When the baths become health clubs who will make sure the only thing we pump is iron?" "How can I buy condoms without the clerk thinking I'm straight?" "Do I need to take my bodily fluids to a toxic waste dump?"

Acquired Surveillance-System Efficiency Syndrome (A.S.S.E.S.) is sweeping our community with guilt and repression. Spread by intimate contact in the seedy backrooms of politicians and bureaucrats, ASSES threatens to deprive us of our civil rights. Its victims--typically promiscuous politicians--are overwhelmed by delusions of superiority and the need to police other people's behavior. There is no cure for ASSES once it strikes.

Fortunately, WE have all the answers and know what's best for you. At this intensive one-night workshop, your favorite gay leaders will offer their own lives as models for you to follow. You CAN survive sex in the age of Big Brother: MENTAL MASTURBATION--the hands-off approach PHONE SEX--anonymity with safety, the best of both worlds. COPING--feel better by guilt-tripping others. OBEY AUTHORITY--who needs S/M? The bureaucrats and politicians will give you all the discipline you need. PLUS: "Getting Off by Getting Votes"-an alternative to sex from SF's favorite gay supervisor.

Lick ASSES before it licks us! (Wondering where it all leads to? You don't have to swallow it. Laws, regulations, vice squads and politicians never solve problems, they ARE the problem. We can make our community a safe and healthy place to live WITHOUT their help. If you're concerned, say so. . . A message from Housewives for Safe Sex, PO Box 11622, SF, CA 94101.)