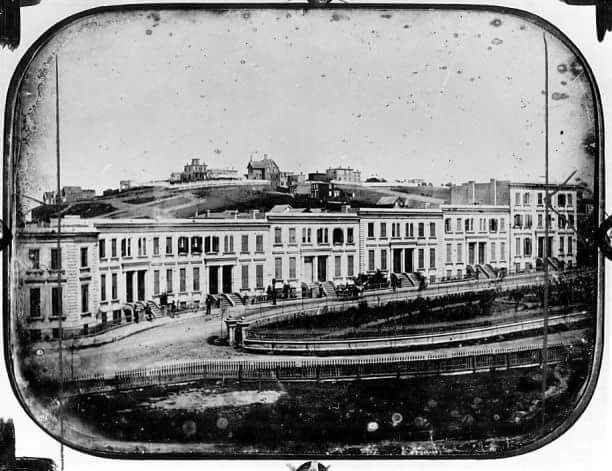 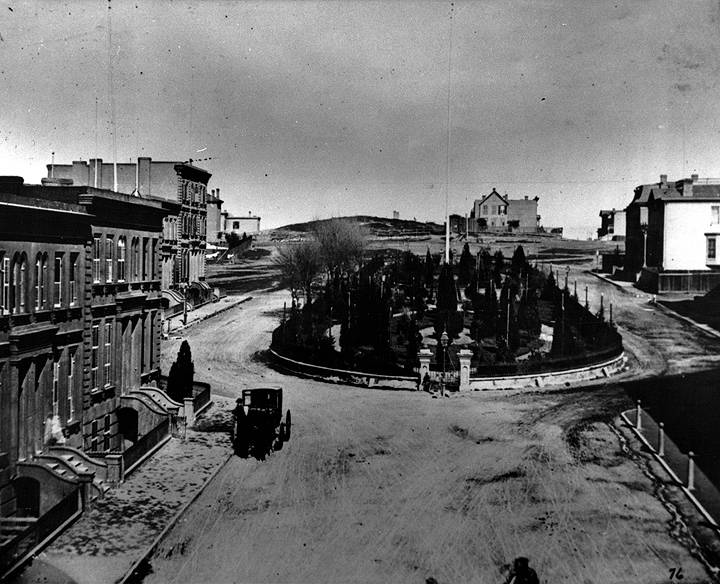 South Park was created by British immigrant George Gordon. Upon his arrival in San Francisco, Gordon became a lumber dealer and began to build wharves. He established one of San Francisco's first iron foundries and built California's first successful sugar refinery. Gordon designed South Park in four sections according to the English crescent formation. The area was intended exclusively for private dwellings and, along with Rincon Hill, was one of San Francisco's first elite areas.

Gordon chose this area a mile south of the business district because it was relatively flat and free of sand dunes. He began purchasing lots in 1852 with the intent of creating an elegant residential area on the plan of one of London’s stylish squares or crescents. It would be free of saloons, gambling halls, stores and warehouses, all noisy and undesirable intrusions. Noted British architect George H. Goddard, Esq. was selected for the job. Construction began in 1854, with the first quarter completed by the end of that year. The houses were of brick, covered in stucco to look like stone. Most had two stories for the parlors and five bedrooms, with a large English-style basement below for the kitchen, dining room, pantries, and servants’ quarters. The stables and coachman’s quarters were in a separate building in the rear.

A main feature of the development was the large oval private garden in the center, 550 ft. by 75 ft., elaborately landscaped with hundreds of young trees and shrubs, accented with colorful flowers, and all enclosed by an ornamental iron fence.

Advertisements of the time show Goddard sold unbuilt lots, as well as partially and fully completed houses. Sales slowed during the economic depression of 1855-1857, due to the diminishing returns from the gold fields, and Gordon never did make the large profits he had initially expected. Nevertheless, wealthy and prominent San Franciscans continued to move to South Park throughout the 1850s and 1860s, making it home to the city’s powerful elite. Business owners, company presidents, politicians, fashionable society, all enjoyed the attractive neighborly community, removed from the noisy and fire-prone downtown. Regular transport service on a horse-drawn omnibus, along with the convenience of a line of stores nearby on Third Street added to its appeal. 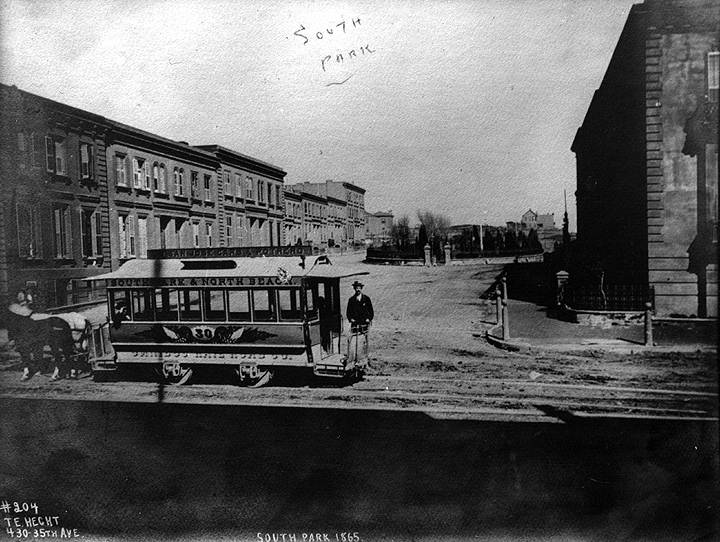 This neighborhood, however, became surrounded by industrial buildings and lost its upper-class character as warehouses and hospitals blocked the prized view. The cut made by the creation of Second Street in 1868 was another major factor in reducing land values. By the 1870s, the well-to-do had abandoned South Park and moved to Nob Hill, where access was limited and the views spectacular. As the wealthy and middle classes left South Park, working-class people began to move in, to live closer to the shipping docks and warehouses where they worked. Japanese immigrants in the late 1800s also settled in this area. Rebuilding after the earthquake and fire in 1906 definitively sealed its future as a working class neighborhood.

Other communities who lived in this neighborhood were the Japanese, Greeks, and the Irish, many of whom were displaced after the 1906 earthquake/fire. African Americans also lived in the area during the 1950s and 60s after coming to find work in San Francisco during World War II. Most African Americans were renters and were forced out in the 1980s when South Park started to become a trendy, artsy neighborhood. South Park has since become, once again, a chic neighborhood for middle and upper-class San Franciscans, often referred to as the heart of "Multimedia Gulch." 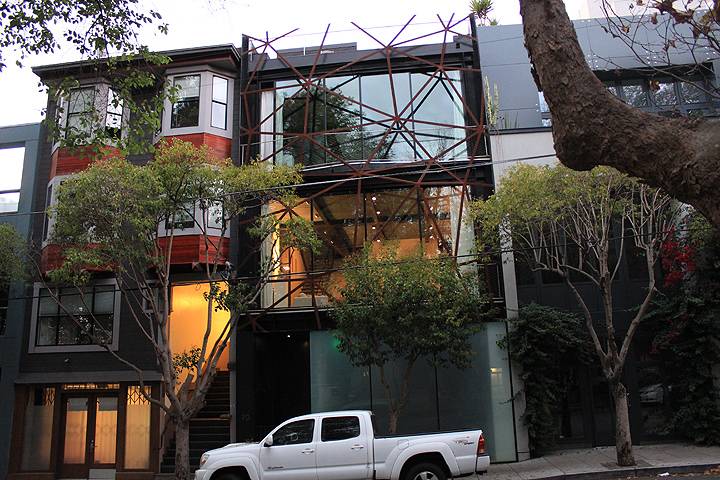 Upscale condominiums have been constructed around much of South Park since the 1990s, and it's now a fully gentrified area in this 2015 photo.