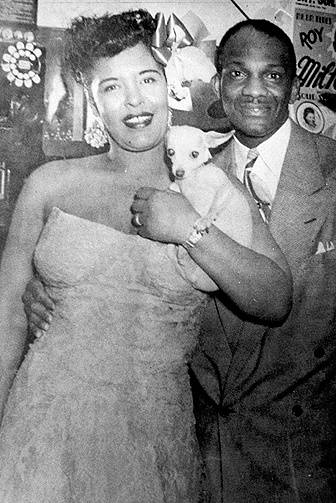 Renowned jazz vocalist Billie Holiday with Wesley Johnson Sr., at his Club Flamingo in the mid-1950s.

Prior to World War II, modern jazz in the swing and bebop forms was thriving nearby in the Central Avenue area of Los Angeles, but San Francisco was still largely preoccupied with traditional jazz, often known as Dixieland. During the late 1940s, however, a few brave, new clubs opened up in the Tenderloin and North Beach neighborhoods, offering up the bebop sound to San Franciscans. They took to it voraciously. By the mid-1950s, a plethora of jazz clubs dotted the San Francisco neighborhoods.

Drummer Earl Watkins reminisces that "You might have four clubs in a block, one on each side of the street. And then you go around a couple more blocks and then you have another couple of clubs. You had the Club Alabam, which was one of our old established jazz clubs. It later became Club Sullivan. Across the street was the New Orleans Swing Club. They had a line of girls in there. The guys had excellent bands. On Fillmore between Sutter and Post, you had Elsie's Breakfast Club. And then later you had Harold Blackshear's Cafe Society. Then down the block was the club called The Favor. Across the street from that was the Havana Club, And then when you went down the next block, Fillmore between Post and Geary, you had The Long Bar, which had Ella Fitzgerald. Then you went down another couple of blocks and you had The Blue Mirror. Then across from the Blue Mirror, they had the Ebony Plaza Hotel. In the basement, they had a club. And if you went up Fillmore to Ellis Street, you had the Booker T. Washington Hotel. And on their ground floor, in their lounge, they had entertainment. That' s where Slim Gaillard played when he came here."' Drummer Art Lewis, a.k.a. Sparky, also remembers the local jazz scene back then: "There was the Coffee Gallery which was on Grant Street and one right off Columbus on Green was The Cellar. And of course you go on the other side, well the Hungry I was down Columbus. And the Dragon Lady which was in Chinatown, was a jazz club. And there was another one called The Rickshaw. And the list continues. The Fillmore, North Beach, the Tenderloin, the Waterfront. San Francisco was jumping to the beat of jazz. And these clubs all drew musicians, both local and traveling, who ultimately ended up at Jimbo's Bop City after their formal gigs...

During the early 1950s, even the U.S. involvement in the Korean War played a small role in drawing musicians to San Francisco. The Bay Area was home to, or visited by, many a musician in military attire. As often as he could, John Handy returned to San Francisco from his Army base to the south, to play and listen, before shipping off to Korea. Chet Baker was a young, James Dean-like, handsome, white boy, with a hot trumpet and plenty of energy. Legend has it that while stationed as a soldier at Fort Mason, Chet would go AWOL at night, dash into town to play jazz 'til the wee hours, then sneak back into the barracks before reveille. Both John Handy and Chet Baker survived Korea and went on to have successful careers as musicians...

Jimbo's Bop City closed its doors in 1965, just when the Fillmore entered a period of drastic physical change. Over the years, much of the neighborhood had fallen into disrepair, and the San Francisco Redevelopment Agency selected it as an area in need of urban renewal. In reparation to the Japanese population that had been displaced during World War II, a new Japantown was built in the Fillmore. This construction resulted in the closing of most businesses that had occupied the old buildings and the dispersal of the families who had dwelt there. Tourists today will find an enormous multiplex theater, apartment complexes, hotels, and numerous Japanese restaurants dominating the area, with a bank at the spot where Bop City once stood. Buchanan Street has been closed to vehicular traffic, and there is no such address as 1690 Post Street. Even the building is gone.

And so it rested, until one day, deep in the dusty archives of the San Francisco Redevelopment Agency, I discovered a photograph of the Bop City building, at that time empty, taken at the end of 1969, five years after the club had closed. The photograph documented the sale of the building. With a bit more research, I learned that a few of the better-preserved Victorians had been saved and moved to other locations. The agency's records didn't show specifically which buildings had been saved, nor specifically where they'd been moved. But they did indicate to which blocks these buildings had been relocated."' So, photograph in hand, I went exploring those blocks of rescued Victorians. About six or seven houses into my search, there it was! Detail for detail, the house matched the one in the Bop City photograph! In the early 1970s, the building had been moved around the corner from Post onto Fillmore Street. Now painted bright purple with white trim, the add-on in front that formerly housed the waffle shop is gone, and the room that had housed Bop City now contains an African-American bookstore.

Thanks to Carol, and the California Historical Society for permission to excerpt this article.