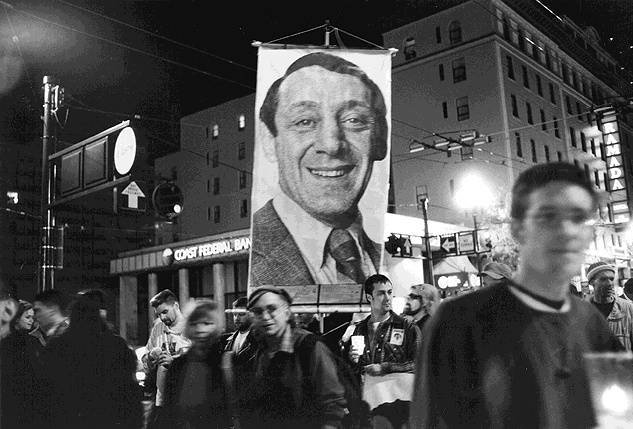 Annual candlelight march in remembrance of Supervisor Harvey Milk. This is 8th and Market in 1995.

Harvey Milk describing his three lives as renter, small businessman, and supervisor, having just been evicted from his own storefront on Castro after a 300% rent increase.

from documentary Pushed Out for Profit by Optic Nerve and Charles Bolton, 1978. 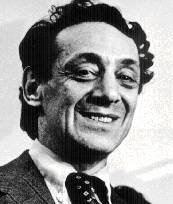 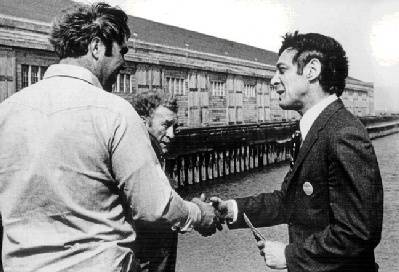 Harvey Milk talking with some Longshoremen during a campaign.

I never know what to say about Harvey. The one thing that was clear and powerful about Harvey was that he was hard to control. He went to institutions of power without a sense of "what do I have to do to get people to be nice to me?" but with a sense of "here I am, you better get your act together pretty quick," and it just got worse and worse. There was always a miraculous quality he had, of being able to bring people together, of being able to say to people who have been treated like scum all their lives, and had desperately tried to maintain some sort of relationship with society, to let go of all their protection without killing themselves. To be supporting enough and loving enough and reassuring enough that he could take people as screwed up as people like me and convince us to march with him, or to hand out leaflets with him, or to somehow identify as gay people, with the possibilities that he was ostracized. That's a magnificent thing for a person to do. I suspect that's what parents do, if they're honest, with their children.

He wanted to teach the world to say the word "gay." He wanted to teach the gay community to say the word 'gay.' The question for them was not "do you believe in the system," but "what are you going to do with your own history?" Because he did not believe in the system, and he did not like other gay people who did believe in the system, very much. He liked the people who hated the system, but caring enough to be able to wallow in that pigpen in order to have their own history together. He wanted July 4th to be the national holiday for queers. Not because he fought to gain the patriotic symbols, but because they were the symbols. They were America's proud patriotic sense of itself, and he wanted us to define whatever was central for them as ours. By raising the flag, we're asserting who we are, we're claiming our history, we're claiming a nation, even though that nation does not perhaps deserve to be claimed. 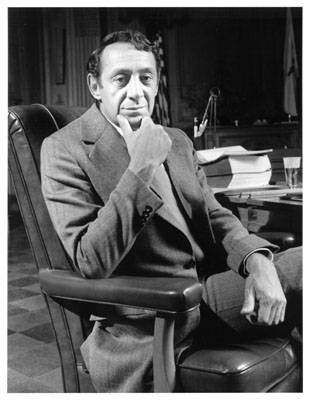 He believed that you cannot have a sense of power and fulfillment as a human being without somehow engaging history. That the closet is a lonely, weak, fearful and dark place. And all the strategies that help people come to terms with their history are strategies that destroy the freedom and dignity of the person who does that. The reason this worked, just like it worked for Martin Luther King was that in the streets of this city, Castro, Valencia, and Polk, where gay people gathered to get away from history, to get away from Texas in my case, or Alabama, or Oakland, or San Rafael, or Hillsborough, or wherever. People came to the Castro at least to try to believe that there was a safe place and a place you could touch one another and not feel all that crap laid on our shoulders. That's where the community came to be, that enabled us to reach out for a little more.

I've never been a separatist, I am certainly not a separatist, but I don't believe that you can move from a sense of self with no self-esteem to a sense of power without going through that kind of experience. And the sad thing that it may be true that it's hard to go from a sense of no power to a sense of power without going through some sort of silly little boy/girl accommodationist strategies. God Harvey hated those. He wanted us to see that the first step for historical effectiveness or political effectiveness was to see history for what it is, that all of the institutions and all of the laws and all rules weren't designed for us, and especially that making queers happy was never a dominant priority for the powers in western culture (or any other cultures either).

I guess if you want to get the quintessential Harvey Milk the best place is his will, that amazing document left to his people in which he wanted to make it very clear that people that had found a place for themselves within the political system... that is not enough, they were the vilest of the lot. And he wrote that will more I think than for any other person, to point that out, because he did not trust Mayor Moscone, who like most all straight politicians surrounded himself but that's the whole dynamic of the system the Harvey Milks of the world get the attention of the system and they respond by dealing with the suck-ups, if you pardon the expression. And that's the dynamic, and Harvey hated that dynamic, he hated empowering those people, and his statement was fundamentally saying if you really care about me, about my life, don't let my life be empowering those kind of people. It was fundamental to Harvey, and it's fundamental to people involved in social movements.