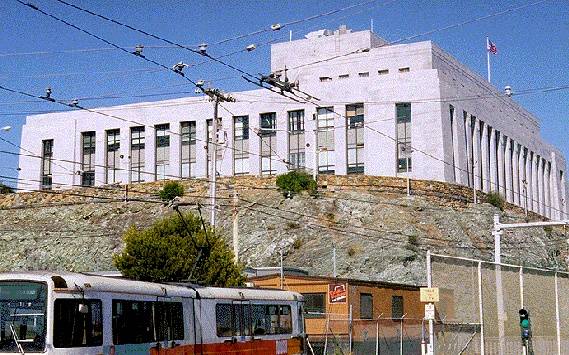 At the San Francisco Mint you see outcrops of blue-gray, jumbled rock. This is serpentine. Look for dark green blocks of serpentine, almost as big as boulders held in zones of lighter green, greasy-feeling, fine-grained serpentine. 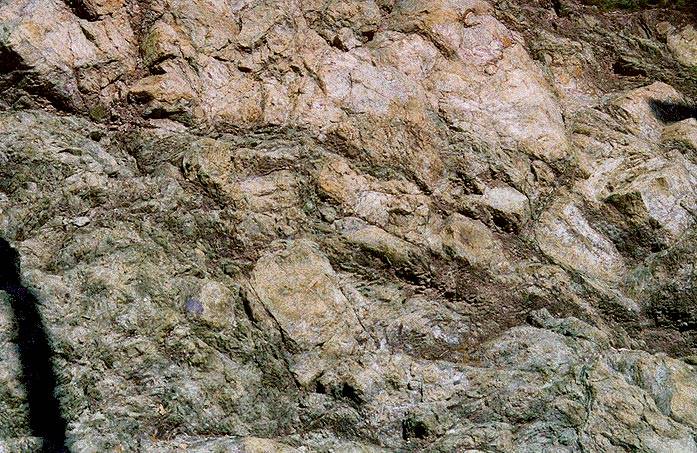 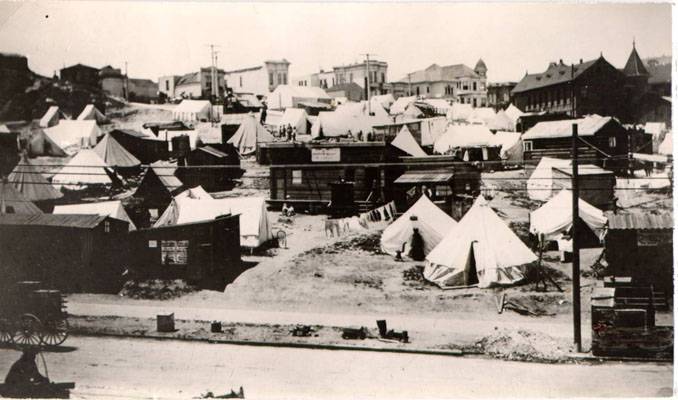 After 1906 earthquake and fire, a refugee camp was established on the slopes of what was then known as "Clinton Mound," today's Mint Hill.

Why on a hilltop?

The western part of the city was built on sand dunes. Most of the valleys in eastern San Francisco were once rivers or marshes. They are filled with loose, young sediments eroded from the hills, from bay mud, or river deposits. Most of the low areas are sandy or clayey and don't offer the spectacular outcrops you will encounter on our hilltops. When you stand on the hill, passers-by may wonder why you turn your back to the sweeping view, but the rocks exposed in San Francisco are just as exciting if you know their story.

Radiolarian Ribbon Chert crops out atop most hills in the western Bay Area, and at Twin Peaks, Billy Goat Hill (Castro and 30th), and State Street (notice the edifice from Castro and Market). Chert is a sedimentary rock made up of the tests, or shells, of single-celled organisms called Radiolaria. They live in the top 100 meters of the mid-ocean. When they die, their shells rain slowly down onto the ocean floor, creating an "ooze" which hardens into rock over millions of years. This ooze also takes up very fine dust blown far off the continents by trade winds, and ocean floor debris flows called turbidite currents that arise from underwater landslides closer to the coasts.

In San Francisco, most of the Chert is a rust-red color, as it was colored by the dust blown from the continent. The chert is made up of many layers, each about one to two inches thick. These bands of red chert are spectacularly folded and you can really see why it's called "ribbon" chert.

In between each red ribbon of chert you will notice a thin layer of fine-grained, dark gray shale. This shale probably came from turbidity currents, was mixed up into the radiolarian ooze, and separated out as the chert underwent diagenesis--moderate temperature and pressure conditions that cause chemical changes in a rock without thoroughly metamorphosing it. Geologist actually are not entirely certain where this shale came from or why the "ribbons" are so uniform in thickness.

Take a high-powered (10x or 20x) hand lens with you, wet a piece of chert, and hold it in the sun. You may see a small translucent-gray radiolaria that sacrificed its' life to bring you hills.

How did it get on top of our hills?

Before the birth of the San Andreas fault 17 million years ago, there was a subduction trench off the coast of what is now California. A subduction trench is a deep, narrow underwater canyon where tectonic plates meet. Dense oceanic crust mostly made up of basalt and related igneous rocks from the earth's mantle is overridden by more buoyant continental crust, which is made up mostly of granitic rocks. This process of plate overriding plate is called subduction. It does not always happen very smoothly. Slices of oceanic crust wind up on top of the continental crust instead of underneath it--and that's exactly what you see here on our hilltops. During emplacement, which took hundreds of thousands of years, the chert was folded and underwent diagenetic chemical changes that make it so beautiful now. This chert ranges in age from 100 to 200 million years old, and this wedge of oceanic crust forms the Franciscan Complex, a suite of rocks known to geologists all over the world for its' rarity and beauty.

Today there is no longer a subduction trench off the coast of California. After the last bit of the old oceanic Farralones plate was pushed under the continent about 70 million years ago, the North American and Pacific Plates began sliding laterally against each other--creating the San Andreas transform fault zone. Today the Pacific plate slides northward past the North American plate at about 5 mm a year on average.

Pillow basalt comes from the Mid Ocean Ridge--the seam in the middle of the Pacific Ocean where underwater volcanic eruptions push the ocean plate slowly toward our continent. When volcanoes erupt underwater, the cold water instantly freezes the lava in a bubble or pillow shape. Lava keeps pushing behind the frozen pillow, pushing it out, cracking and expanding it, and creating cracks that more lava can flow through--until lava oozes out again and the next pillow, too is frozen by the sea water. Although most basalt outcrops in San Francisco do not display clear pillow shapes, you may be able to make out some globular forms, especially at Billy Goat Hill. If you go to the Nicasio Reservoir in Marin County, look for beautiful pillow basalts along the road.

At Twin Peaks or Billy Goat Hill look for the black to rusty-tan rock that is broken into inch-square or smaller chunks. This is oxidized mid-ocean ridge basalt. You probably will not see much of interest with a hand lens. At Billy Goat Hill, you may be able to make out some orbs, but you will probably not find basalt outcrops underlying the chert at Heights or Glen Park.

How did it get on top of our hills?

Like the chert, the pillow basalts come from the deepest part of the ocean. As the basalts kept erupting in a ridge down the middle of the ocean plate, the older basalts were pushed away towards the outside of the plate in lateral strips where they were gradually covered by the radiolarian ooze that makes up the chert. Basalt, chert, and other rocks were scraped onto our continent together.

Serpentine, the California state rock, is a metamorphic rock that is made up of the mineral Serpentenite (if this is confusing, just call both the mineral and the rock Serpentine--many geologists do). Serpentine weathers into clays that are known to cause landslides and many regional parks in the Bay Area stand today only because the landslide hazard precluded development--so give your thanks to Serpentine the next time you go for a bike ride in Wildcat Canyon.

Where did it come from?

Serpentine is formed when rocks deep in the earth's interior come into contact with water, heat, and pressure. As fits our state rock, it is brought to the surface by faulting and is known as a "regional metamorphic" -- a rock that requires large-scale faulting such as the San Andreas for exposure at the earth's surface. Serpentine is not part of the Franciscan Complex which is made up of Chert and Basalt.

At the San Francisco Mint you will see outcrops of blue-gray, jumbled rock. This is serpentine. Look for dark green blocks of serpentine, almost as big as boulders held in zones of lighter green, greasy-feeling, fine-grained serpentine. Since this rock must be faulted to be brought to the surface, it's appearance is characterized by intense deformation. One distinctive feature of serpentine are "slickensides". You may find chunks of serpentine with tiny grooves on one side. These grooves come from the pressure of rocks grinding past one another in a fault zone. You will also notice small white veins throughout the rock. These veins formed when hot water shot through the rock deep inside the earth's crust.