Public Arts Programs in the 1930s 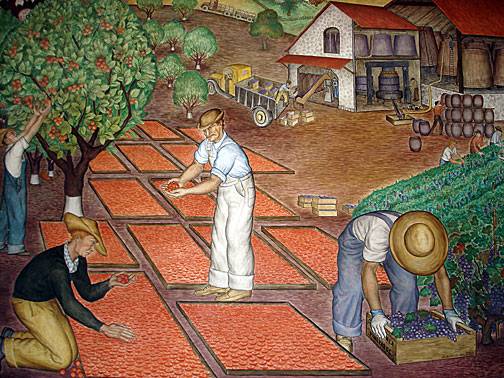 The Coit Tower incident at the beginning of the New Deal and the Rincon Annex controversy at the end bracketed a decade during which four major (and one minor) government art programs covered California's walls with visions of liberal inspiration rather than radical anger. Although the public applied the generic term "WPA" to all federally sponsored art, the Roosevelt administration in fact created an administrative nightmare of five, sometimes overlapping, arts projects.

Beginning in the fall of 1933, the government began subsidizing unemployed artists with the Public Works of Art Project (PWAP). After the agency's demise in I934, it was followed by the State Emergency Relief Administration (SERA) and then in 1935 by the Treasury Relief Art Program (TRAP) and the Federal Art Program (FAP) of the Works Projects Administration. In addition to these relief programs, the Treasury Department commissioned art in federal buildings through its Section of Painting and Sculpture (Section). Section artists were hired purely on merit and did not have to pass a financial means test.35 PWAP, TRAP, and the Section seem to have reflected the aesthetic values of Treasury Department administrator Edward Bruce who favored the American Scene.36

On the other hand, the director of the FAP, Holger Cahill, administered with much looser reins.37 Interestingly, the greater freedom enjoyed by FAP artists seems unreflected in their work. Murals painted under Bruce's guidelines or under Cahill's policy of benign neglect were remarkably similar.

Artists hired on all projects except the Section also produced easel paintings and prints. A study of this nonmural art--which by its form is less public in nature--provides some opportunity to measure the extent to which the murals reflected the artists' personal values as well as the demands of federal officials.

Generally, easel art produced for the PWAP and TRAP followed the American Scene line laid down by Edward Bruce.38 Artists who worked on the FAP, however, had no mark to toe. They were free to paint whatever they liked in whatever style they preferred, and there were also many more artists associated with the FAP. Despite the large number of works produced, however, very little of the FAP easel art remains. Most was destroyed during World War II when warehouse storage space was needed by the armed forces.39 What remains are those easel paintings which were accepted by public institutions. Having thus passed the test of public taste and entered museums, it is not surprising that most of these pieces resemble the murals both in subject and style.40 But there is reason to believe that even the paintings which were never hung in galleries conformed to the same pattern. For example, the easel works of San Jose's Herman Volz, the only California artist who managed to purloin his paintings back from the FAP, show the same preoccupation with American Scene subjects as do the murals.41

Despite the rarity of New Deal easel paintings, comparison can be made based on the period's mural art and the extant "portable" art contained in the California Museum of Art print collection. Stored in the Oakland Museum, this collection of more than 850 prints by almost 300 artists contains an excellent cross-sampling of lithographs, etchings, and wood engravings made by artists from California and other states.420 Allowing for individual stylistic variations, review of this important source indicates that the prints are as similar and homogenous as the murals. An occasional example of "modernist" work appears in the collection, such as Helen Lundeberg's post-Surrealist "Table, Door and Books," or Edward Hagedorn's anti-war series of calaveras, which use skeletons to comment on social issues. But Arthur Murphy's critically acclaimed lithographs of the Bay Bridge are much more typical.43 These finely executed prints of muscular men and structural steel convey as well as any mural the New Deal theme of prosperity through work.44 New Dealers by choice not coercion, and willing if de facto spokesmen for the administration, mural and easel artists employed on all four arts projects expressed their optimistic faith in America in conventional and prosperous images.

Even the lone mural effort in the entire state of California that showed a group of obviously unemployed men was painted not to criticize but to underscore the virtues of the New Deal.45 Although Charles Kassler's series of lunettes in the Beverly Hills Post Office might at first appear to have been an isolated example of radical iconography, Kassler was in fact a moderate New Deal Democrat who wished to depict the "administration's effort to solve the unemployment problem."46 In the first lunette of his series, Kassler painted artists like himself working on a federal art project. In the second mural he showed them lined up at the paymaster's window, and finally he painted them being "met by their dear ones who help them buy with this money the necessities of life for which they have been sorely in need." The unemployed men shown sitting on the curb in front of the pay windows, Kassler explained, were merely a visual device to point up the benefits of the work programs.

Kassler chose the Public Works Administration as his theme for a number of reasons, in part because he felt himself to have "a very vital part in the project, which, he believed, was saving the American way of life. The "extremely American" PWA subject, said Kassler, is "a matter of historical record" obviously worth artistic attention. Even the painters depicted in the mural were shown working on a mural of bison, a "truly American scene," while several sculptors carved a statue group entitled "Abundance" that Kassler described as "distinctly representative of our national resources."47

Not a word of objection came from Washington about the content of the Kassler murals, although several Treasury Relief Art Project (TRAP) personnel questioned some elements of his composition, especially his crowding of figures.48 Kassler responded that people did in fact crowd around paymasters' windows and that he was trying to convey a sense of the crowd's "human joy in being paid for their work."49 As an artist Kassler was not painting unemployment and the collapse of the American system, then, but working people returning to a fully functioning society. In a 1937 letter to a federal official, Kassler confidently predicted that work projects would revitalize the free-market economy through more employment, more money circulated, greater consumption, larger profits, happier people."50 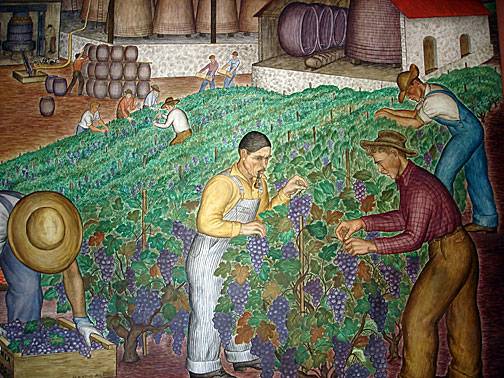 Kassler's dramatic paean to the New Deal was unique in California federal art, but his commitment to the Roosevelt administration was shared by most artists. "We were all very ardent New Dealers," recalled Edward Biberman, a Los Angeles artist, "and when we found [New Deal policies] reflected in the art programs we were even more enthusiastic."51 Lorser Feltelson, Los Angeles artist and FAP administrator, remembered that most artists "saw Roosevelt as ... the leader of the coming civilization."52 This is hardly surprising, considering that the government was employing them to continue in their art, for which they were naturally grateful. "You couldn't sell paintings, nobody was buying pictures, what were we to do?" asked San Diego painter Belle Baranceanu. Finding a job on the FAP, Baranceanu remembers, meant a "chance to do your own thing.... I voted for Roosevelt because he had made it possible for this to come about."53

Baranceanu's pragmatic political commitment to New Deal liberalism was typical of California's artists. After an inspection tour of the West in 1937, TRAP administrator Cecil Jones reported that western artists were not "demanding assistance from the government, but only asking for a chance to earn a decent living."54 Section staffer Bernard Reufberg noted that California artists frequently expressed their appreciation for the "extreme kindness" shown to them by the Section. "This should be exceedingly gratifying when one realizes that it comes from a class of people who are supposed to be in the majority 'leftists,' but, concluded Reufberg, "I have never found them to be so."55

Mill Valley sculptor Richard O'Hanlon remembered a wide gap between the minority of political activists and the majority of artists. O'Hanlon recalled that whenever he and his wife went to meetings or parties with the radicals, art never came up, and this was a very boring thing for me."56 To some extent the artists appear to have endorsed the popular view that a little suffering hones the fine edge of creativity, and they were reluctant to blame society for their plight. Sculptor Jacques Schnier, who held an engineering degree from Stanford, was by choice "living and working in one room and living from hand to mouth." "It was something of my own doing, and I couldn't see how you could blame society for not making life smoother."57