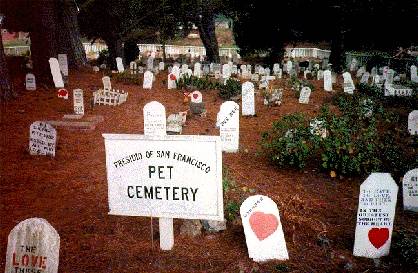 Pet Cemetery in the Presidio, mid-1990s.

Life in a cemetery can get rather sedentary. And military cemeteries are even less lively than most. For one thing, they tend to be uniformly . . . uniform. The headstones, identical in size and shape, march off to infinity in perfect rows, pausing just long enough to display names, ranks, and serial numbers of otherwise indistinguishable fallen heroes. The atmosphere exuded by such places--even by first-rate ones like Arlington National Cemetery--is unremittingly grave.

It is refreshing to discover that San Francisco, a city that has always marched to the beat of a different bongo player, hosts what may be the world's weirdest military cemetery: the Presidio Pet Cemetery, now known by aficionados as the Presidio Pet Cemetery and Toxic Waste Site due to a scurrilous rumor that the Army has been dumping a whole lot more than dogs bodies and cat corpses there. (As it turns out, the "Beware of the Toxic Waste" signs refer not to jettisoned chemical weapons or plutonium, but to the high levels of lead traceable to flaking paint from the Golden Gate Bridge on-ramp that soars overhead.)

Despite this minor image problem, the Presidio Pet Cemetery is still one of the eeriest and most hauntingly picturesque spots in the City. Located directly beneath the aforementioned toxic bridge approach, and offering a fine view of the bridge through the poisonous piers of said on-ramp, the cemetery's motley array of homemade grave markers betrays a humanity generally absent from human military cemeteries.

What's more, the place is fairly redolent with lugubrious kitsch. Touching hand-lettered epitaphs bemoan the timely or untimely fates of dogs, cats, parakeets and goldfish. Though most of the grave markers are roughly the same size and shape, in imitation of the human military cemetery just up McDowell Avenue, many are cocked at odd angles, like the ears of an attentive mutt. The smattering of askew markers lends a sweet, disheveled, slightly loonie tone.

Breaking the monotony even further are the various unusual gravesites which have been allowed to flourish in blatant breach of military decorum. The first that leaps up to greet the eye is the twin gravesite of Raspberry and Mister Twister, a pair of basset hounds whose gentle owner, Ken, has posted odes to the defunct dogs on the heart-studded stones. Another outstanding headstone, replete with fresh ribbons and roses, and carved in marble instead of the usual wood, commemorates Tippy, "daddy's little baby boy." And the Unknown Pet, like the Unknown Soldier, is dutifully honored, though perhaps not quite so ceremoniously.

It was maintained by the Presidio Boy Scout Troop up until the lead contamination was discovered in the summer of 1993. Since then, people whose pets are buried there have continued to keep the place up, despite the apocalyptic warning signs.

Just how dangerous is the pet cemetery? Dixie Porter of the Presidio's Community Relations Department suggested that the signs' bark is worse than their bite. According to her sources, "You'd have to live there and eat the dirt for about six months before you'd be in any danger." But according to the signs, the place is officially off-limits except for authorized personnel! Do the signs really mean what they say? "Yes, they do."

In any case, despite the forbidding signs, the Presidio Pet Cemetery still looks as if it is open to the public, and so far nobody has been arrested for walking through its wide-open entrance. If you should chance to visit, you can enjoy the thrill of violating a forbidden area without inordinate fear of prosecution. But don't plan on moving in, and don't eat too much of the dirt. 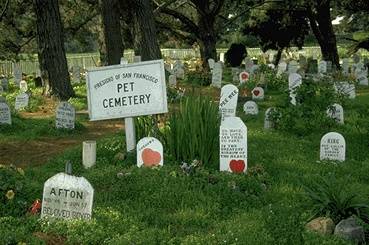