Naming of Haight Street, Part 3: Of Maps and Men

Below is a list of the west-of-Larkin-Street streets from Dexter’s 1851 map along with explanations of the possible origins of the street names and thumbnail biographies of honorees. The original streets are in bold capitals. Today’s corresponding streets are in parentheses. The first three streets were named by Hervey Sparks and the rest by Archibald Peachy, et. al. 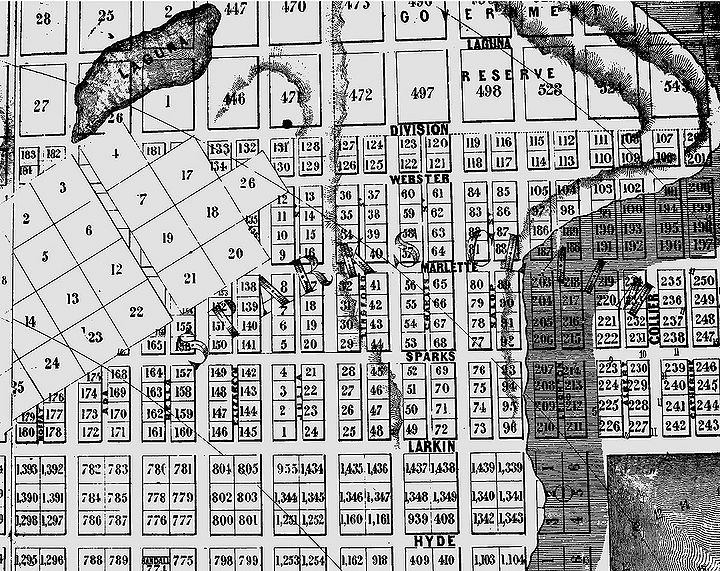 Arrived in San Francisco June, 1849. A self-described real estate dealer. Owner/claimant of land bounded by Larkin Street on the east, Union Street on the south, the bay on the north and Division Street on the West as of 1849. He employed Seneca Marlette to survey his property in 1849. (See MARLETTE Street below.)

Most likely named after Daniel WEBSTER, Massachusetts Whig Senator and strong advocate for the Compromise of 1850 that allowed California to enter the union as an undivided free state. (See BENTON Street below)

This street was the dividing line between Hervey Sparks’ property to the east and Thomas Larkin’s property (and later Peachy, Billings and Wright’s property) to the west. The distance between Division Street and Webster Street was not a full block. West of Division, the full block interval resumes, but because of this Division Street offset, the earlier streets to the west do not align relative to today’s streets. The locations of the earlier streets are described by their mid-block locations relative to today’s streets.

5) LAGUNA STREET (Between Gough and Octavia Streets) There was a lagoon at the northern end of this street.

Arrived in San Francisco August 1848. Phelps was deeply involved in business and real estate ventures with Thomas Larkin. He was the brother-in-law of Dexter R. Wright. (See WRIGHT Street below.)

7) HALLECK STREET (Between Laguna and Buchanan)

He was an Army Officer assigned to California during the Mexican-American War. After the war he served as California’s Military Secretary of State and was one of the principal authors and a signer of California’s first constitution in 1849. He was nominated to be one of California’s Senators, but came in third behind John C. Fremont and William Gwin. On December 31, 1849 he became the third member of the pioneer San Francisco law firm of Peachy, Billings and Halleck who specialized in land law. (See PEACHY and BILLINGS Streets below.)

8) WRIGHT STREET (Between Buchanan and Webster)

(Not to be confused with Stephen A. Wright, business partner of Samuel Haight.)

Arrived in San Francisco 1848 or1849. Attorney. Graduated from Yale Law School in 1848. On February 3, 1848 he married Maria Phelps, sister of Bethuel Phelps. (See PHELPS Street above.)

9) BILLINGS STREET (Between Webster and Fillmore)

Arrived in San Francisco in 1848 at the age of 25. He formed a law partnership with Archibald Peachy in June, 1849, later to include Henry Halleck.

10) HOLKINS STREET (Between Fillmore and Steiner)

11) MONTAGU STREET (Between Steiner and Pierce)

12) MERRIFIELD STREET (Between Pierce and Scott)

13) PEACHY STREET (Between Scott and Divisadero)

Arrived in San Francisco April 1, 1849. Attorney. By May 3, he was practicing law. A month later he had partnered with Frederick Billings to establish Peachy and Billings. In August, 1849, he ran for delegate to the constitutional convention. (He ran against Samuel Haight.) On October 1, 1849 he was appointed city attorney by the city council.

He did not run for reelection. His firm specialized in land cases and he owned much of the land west of Larkin Street known as Larkin’s Grant or Rancho Punta de los Lobos. 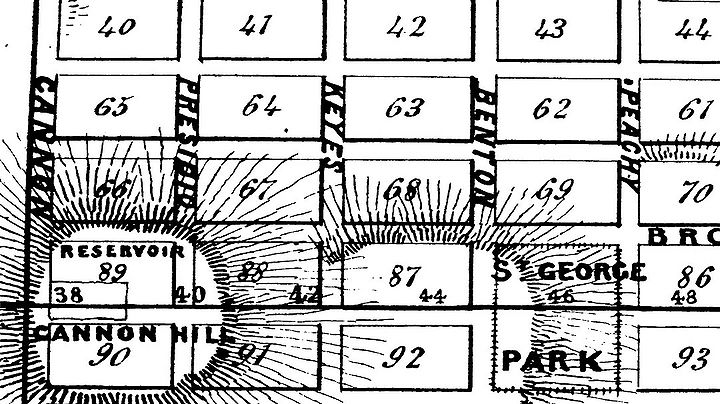 14) BENTON STREET (Between Divisadero and Broderick)

Most likely Thomas Hart BENTON, Jacksonian Democratic Senator from Missouri, architect of Manifest Destiny and America’s westward expansion. Advocate of anti-slavery and Compromise of 1850 which allowed California into the union as an undivided free state. (See WEBSTER Street above.)

15) KEYES STREET (Between Broderick and Baker)

Arrived in San Francisco April 1, 1849. Captain US Army. First American commandant of the Presidio. Within a week of their arrival, 2/3 of Keyes’ men had gone AWOL to the mines. With so few men under his command, and the cost of living so high, Keyes was allowed to supplement his meager military salary with outside employment. He used his surveying and civil engineering skills from West Point and submitted the best plan for a wharf extending from Commercial Street, winning $500. In December 1849 he became the Director and Treasurer of the stock company overseeing construction of what was called Long Wharf or Central Wharf. He was involved with Theodore Shillaber in this enterprise. (See SHILLABER Street below.)

In early 1850 the government leased land at Rincon Point to Theodore Shillaber, but squatters prevented him from accessing his land. Keyes and twenty of his soldiers evicted the squatters without force or incident. However, the leader of the squatters cited Capt. Keyes to appear before the civil authorities for illegally evicting them and demanded $6,000 in damages. The case was heard by Judge Levi Parsons and Keyes’ attorney was Archibald Peachy. (See PARSONS Street below, PEACHY Street above.)
</blockquote>

16) PRESIDIO STREET (Between Baker and Lyon)

Probable reference to the street’s proximity to the Presidio at its northern end.

Refers to Cannon Hill at Pacific Street between Presidio and Cannon Streets. (Today’s Pacific and Lyon Streets.) On April 3, 1850, on the crest of a high hill, Capt. Erasmus Keyes, Henry Halleck (at the time an Army Captain), and Azro Merrifield staked the southeast corner of the Presidio Military Reservation. In May the stake was replaced with a cannon set in the ground. 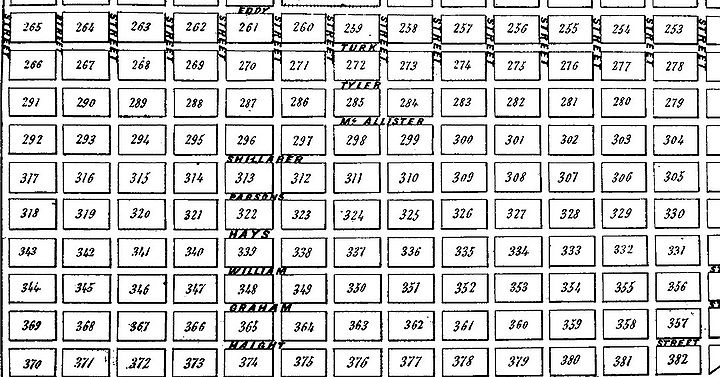 In the late 1840s he traded between Mexico, California and Hawaii. On January 24, 1849 he was proclaimed a “Denizen of Hawaii” by the Kingdom of Hawaii. In 1849 he was an emissary of Hawaiian King Kamehameha to California. He settled in San Francisco sometime in 1849.

In 1849-1850 he was involved in the Central/Long Wharf (Commercial Street) project with Erasmus Keyes and others. He was a business partner of Sam Brannan in 1850, and an officer of the San Francisco Chamber of Commerce.

Arrived in 1849. Founded the California Whig Party in February 1850. On March 30, 1850 he was appointed judge by the legislature. One of the first cases he heard was a suit brought by squatters against Capt. Keyes for illegally evicting them from Federal property leased to Theodore Shillaber. Judge Parsons threw the case out of court.

He arrived in San Francisco January 1850 long after his reputation preceded him. He was a legendary Indian fighter and Texas Ranger Captain. He also fought in Mexican-American War. San Francisco’s first Sheriff 1850-1854.

According to H. H. Bancroft: “The contest for Sheriff was one of the most exciting on record, with lavish generosity on one side, and enthusiastic display of bands and banners on the other. But the fame of John C. Hays as a Texan ranger, and his opportune exhibitions of dash and horsemanship, captured the populace.”

He was the owner of the Graham House Hotel, a building prefabricated in Baltimore and shipped to San Francisco on April 19, 1849 by Graham. It arrived September 21 and was assembled on the corner of Kearny and Pacific Streets. H. H. Bancroft described it: “A four-story wooden edifice lined on two sides by continuous balconies. It opened as a first class hotel—The Graham House—on December 25, 1849.” While still an Alderman, Graham sold it to the city for a City Hall on April 2, 1850 for $100,000. The city spent another $50,000 on interior remodeling.

Arrived in San Francisco September, 1849. He was one of the leading real estate auctioneers of the day. He was a member of the first Board of Aldermen in June 1850.

Came to San Francisco in 1850, becoming a commission merchant on the Central Wharf, then became involved in the real estate business with Peach, Billings & Halleck. Did well enough to buy land and a house worth $14,000.