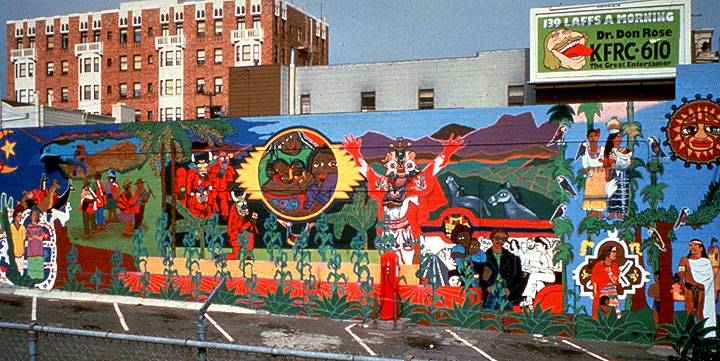 Latinoamérica mural on Mission Street midway between 25th and 26th, 1974.

The Mujeres Muralistas made its formal public appearance in 1974 with a large mural painted for the Mission Model Cities organization, located at Mission and 25th Streets. Consuelo was approached by a friend who worked at Mission Model Cities and asked if we could design and paint a mural representing Latinos in the Mission District. The organization gave us $1,000 for the whole project. Consuelo, Graciela, Irene, and I got together and decided to accept the invitation. The four of us met at our home in Balmy Alley and brainstormed a design. Our house became the central headquarters of the Mujeres Muralistas. Each of the women had a key to the house and could come by at any time of the day. There was a large table in the laundry room ready with all the drawing tools necessary to work on the design. We worked as a collaborative group, sharing information, research, and discussing what kind of mural we wanted. This mural, Latinoamérica, was our introduction to the broader community as muralists. Everyone was watching us and interviewing us for newspapers, television, and radio. We represented a new generation of muralists depicting our own reality at that present moment of time, exploring new ideas and new styles, and speaking about the Latinas who lived in the Mission District. As a result, more women wanted to join the group and some just wanted to help out in whatever way they could. Miriam Olivo from Venezuela and Ruth Rodriguez from Puerto Rico were invited to join us by Consuelo. Ester Hernandez and Xochil Nevel were introduced to us by Irene. They came by and helped us paint.

The small Model Cities budget was spent on paint and scaffolding to reach all of the twenty-foot wall. Whatever was left over we split up to buy groceries. There was never enough money for rent and food so we managed to survive with part-time work and lots of bartering. We had the scaffolding delivered but not assembled. We figured out how to put it together ourselves, and secured it to the wall for safety... We typically worked from 7 a.m. until 3 p.m. By that time it was either too hot, or the winds would dry our paints too quickly, or everything flew off the scaffolding.

When men watching us discovered we were women, they would not leave us alone, and especially if they were drunk they wanted to touch us. In general the Latino community was our primary audience and they let us know they were grateful. They brought us gifts of beer, tamales, and flowers for honoring them and their culture. They also brought their children to introduce them to their Latino heritage so they would not forget where they came from. The mural seemed to heal some of the community’s wounds.

The mural had elements connected to our culture but we didn’t want to produce another copy of the Mexican pyramids or paint a homage to the style of the los tres grandes. Instead, we used a pyramid made of corn stalks to emphasize the importance of the corn that fed the indigenous people of the Americas as well as the whole world. The mural also spoke to who we were and where we came from. As Latina artists raised and educated in the US we had the best of both worlds, connecting art school influences with our cultural roots.