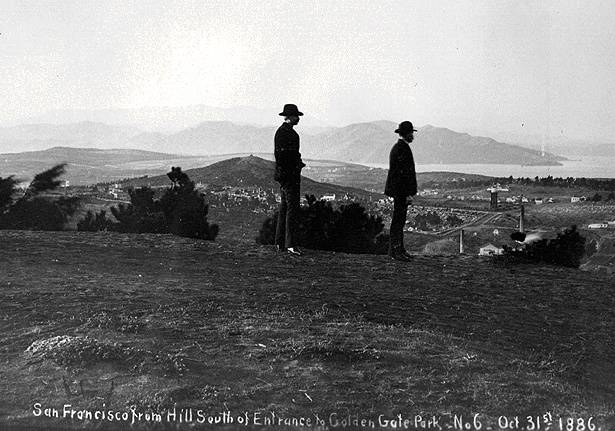 Lone Mountain looms behind men (left of the center figure) standing on Buena Vista Heights, with the Golden Gate in distance behind that, October 31, 1886.

After the third St. Ignatius Church on Hayes and Van Ness was destroyed by fire in 1906, a new church was begun "as a Jesuit act of faith" on former Masonic Cemetery land at Parker and Fulton. The Neo-Baroque style structure was built between 1910 and 1914 with a tin roof, steel frame, engaged fluted columns of terra cotta, pressed brick walls containing over 250,000 bricks, and 128 clerestory windows. Its twin towers could be seen by ships at sea. The 5,824-pound bell in the campanile had been saved from the church on Hayes and Van Ness. Today St. Ignatius is illuminated in the evenings and sits golden in the moonlight on its hill.