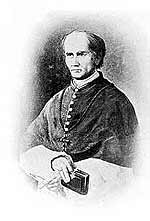 Joseph Sadoc Alemany was born in Vich, Spain, on July 13, 1814, entered into the Dominican order, and was ordained a priest in Italy in 1837. He emigrated to the United States in 1840, where he was a missionary in Kentucky, Ohio, and Tennessee. In 1848 he was named provincial of the Dominicans in the United States.

On June 30, 1850, Alemany was consecrated "Bishop of Monterey, Upper California," in Rome. The multilingual prelate proceeded to Gold Rush California, where he traveled among the numerous towns and mining camps of his diocese, organizing parishes and Catholic institutions for his multiethnic flock.

Alemany moved the seat of his diocese from Monterey to San Francisco; and on July 29, 1853, Rome established the Archdiocese of San Francisco and appointed Alemany as its first archbishop. Monterey became a separate diocese (its border on the north just south of San Jose, and its southern border, Baja California). Alemany's archdiocese went all the way to the Oregon border.

Even before Rome established the new archdiocese, Alemany had laid the cornerstone for a cathedral at the corner of California Street and Grant Avenue. Called St. Mary's Cathedral (but dedicated to the Immaculate Conception of the Blessed Virgin Mary), it was dedicated at midnight mass on Christmas Eve, 1854. The red brick church that structurally survived two fires still stands today as Old St. Mary's Church.

Alemany had to rely primarily on immigrant priests and nuns to minister to the needs of Catholics in his archdiocese. After his consecration, he had traveled in Europe seeking priests and nuns for his diocese, and this quest continued after he arrived in California. Two attempts to found seminaries to train a local clergy had both failed.

Within five years of Alemany's arrival, he was joined by fellow Dominicans, the Sisters of Notre Dame de Namur, the Daughters of Charity, the Sisters of Mercy, the Presentation Sisters, and the Jesuits. Schools, orphanages, novitiates, convents, and other Catholic institutions were started.

By the early 1880s, 30 years after he had been appointed archbishop of San Francisco (a new diocese of Sacramento had been established by then), the Archdiocese of San Francisco had more than 200,000 Catholics, 175 priests, hundreds of women religious, and more than 125 parishes. The Jesuits had founded two colleges: St. Ignatius College (now St. Ignatius College Preparatory High School and the University of San Francisco) and Santa Clara College (now Santa Clara University). At age 70, Alemany had finally begun to grow weary of the demands of his missionary episcopate and officially retired on December 28, 1884.

Alemany was succeeded by his coadjutor archbishop, Patrick W. Riordan. In 1885, he returned to his native Spain where he died in 1888.

--from the "Encyclopedia of San Francisco"