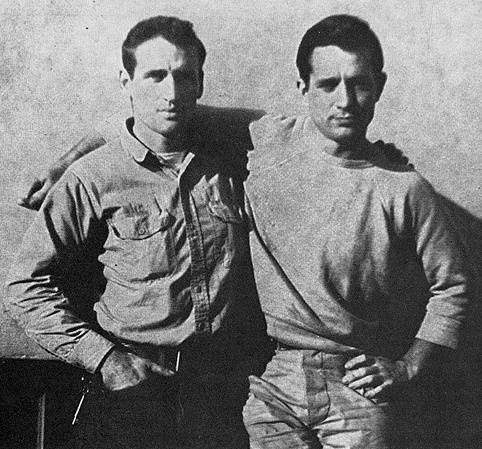 Jack Kerouac and Neal Cassady sped back and forth between New York and San Francisco, measuring the disappearing landscape of freedom, an experience portrayed in Kerouac’s novels. With the publication of On the Road in 1957 the Village Voice noted that “Jack Kerouac, the Greenwich Village writer (with Allen Ginsberg and Gregory Corso), had to go to San Francisco to become a San Francisco writer and become famous.”

Like Mérger’s book about Paris bohemians, the novels of Jack Kerouac chronicled the half-imagined, half-real lives of the artists. His On the Road and Ginsberg’s Howl seemed to awaken the collective American id, arousing desire and fear, rage and envy.

The principal writers of the Beat Generation--Allen Ginsberg, William Burroughs, and Jack Kerouac--had met in New York City in the early 1940s, when Ginsberg and Kerouac were students at Columbia University. They were experimenting with new writing based on uncensored self-expression and altered states of consciousness induced by trance or drugs. Joined by Neal Cassady, Gregory Corso, and Herbert Huncke, they hung around Times Square, fascinated by marginal subcultures, and picked up the style and language of addicts, con men, carnies, hustlers, and small-timers. In the world of the dispossessed urban dweller they saw an escape from postwar mass society.