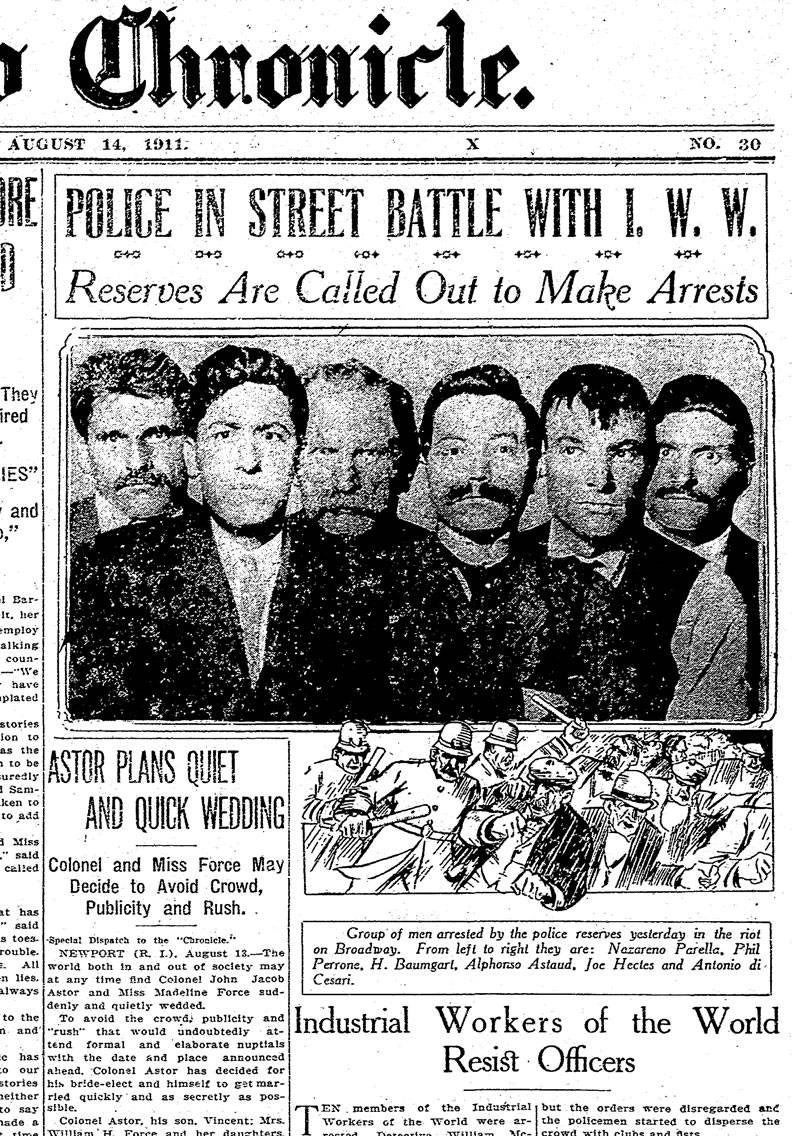 The Industrial Workers of the World (IWW, or the “Wobblies”) were agitating in North Beach in the early 20th century. Thriving among Italian workers, in 1911 an organizing campaign was directed at bakery workers, with speakers standing on cartons on Broadway near Grant Avenue. Exhorting passersby to reject Americanism and law-and-order politics, the radical IWWers couldn’t help but declaim their atheistic views when they saw parishioners heading up the street towards the nearby Catholic church. When the church complained to the police after an August 6, 1911 gathering on the street, officers arrested IWW cofounders P. Galeandro and Filippo Perrone.

Peronne was an admirer of Luigi Galleani, a well-known advocate of direct action in the class war of the era. Peronne himself had recently arrived from Tijuana, where he had participated in an effort by the Mexican Liberal Party (Partido Liberal Mexicano, led by the anarchist Ricardo Flores Magon) to seize Baja California in the midst of the Mexican Revolution. Wobblies had streamed into Baja to bolster the effort, but after a few short months, regular Mexican troops defeated the short-lived anarchist insurrection there.

After the San Francisco arrests, both men were fined $10 and released. A week later, Wobblies again gathered on the street and addressed two hundred supporters. According to the San Francisco Chronicle, police arrested all of the organizers after Perrone “spoke disparagingly about the American flag, condemned law and order, denounced all forms of government and ended with a tirade against the Pope.” As police led their prisoners to a firehouse at 643 Broadway, a furious mob bombarded the police with rocks and bricks in an effort to unarrest the prisoners, filling two blocks of Broadway in front of the firehouse. Eventually reinforcements arrived and ten men were arrested and charged with failing to disperse and inciting to riot.

Two days later a rally drew 2,000 supporters and hundreds of new members joined the IWW. The charges were quietly dropped and on August 20 a huge victory meeting was held. Local merchants may have interceded with the police to reduce the repression since as an Oakland newspaper discovered, many were “pleased with the anarchist [rallies] since they brought in so much business.”