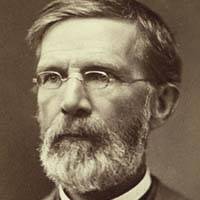 Several weeks after the death of Professor George Davidson on December 3, 1911, the San Francisco Board of Supervisors complied with a request from the Sierra Club and changed the name of San Francisco's tallest peak to Mt. Davidson. The rustic beauty of San Francisco's highest peak truly reflected the character of its new namesake. George Davidson, born in Nottingham, England, was of Scottish descent. Perhaps his Scottish heritage gave him the vigorous physical stamina that sustained him as he surveyed the mountains, seas and coasts of the world. He exerted conscientious and brilliant attention to scientific measurements and surveys in the most adverse conditions. The results were scientific insights of inestimable importance locally and globally.

George Davidson's genius must have been apparent from the very beginning--at the age of four, young George could read the New Testament. After the family moved from England to Philadelphia in 1832, George and his brother Thomas Jr. received their early education from their mother. Her impact on his early life is testimony to the importance of parental influence on a child. Oscar Lewis, one of Davidson's biographers, said of Mrs. Davidson, "[she had] a deep interest in, and a considerable knowledge of, the principles of mechanics ... and young George ... recalled her demonstrating to him by simple experiments certain basic principles of leverage, the force of steam and similar phenomena." George's father, an inventor in his own right, also exerted an important influence regarding practical science. The family had run a lace-making factory in Nottingham, England, and maintained a lively familial involvement in production of lace. In Philadelphia, Central High School was the only formal school George ever attended. He graduated as valedictorian. While there, Davidson received special encouragement from the principal, Alexander Dallas Bache. Bache gave Davidson added assignments in scientific study. Soon Davidson was tracking meteors at the Girard College Magnetic Observatory. When Bache became physics professor at University of Pennsylvania, Davidson did large drawings for Bache's lectures, worked daily from 3 to 9 p.m., then observed from 12:30 to 8:30 a.m. These long hours might have burned out the ordinary student but a young passionate scientist like Davidson, loved it. Next, he was made supervisor of a group of astronomic observers. When Bache headed the U.S. Coastal Survey team, George went along, too. Then came a break that would steer Davidson straight into the main course of his career.

The U.S. government needed men to draw and compute accurate charts and surveys of the California coastline. Davidson's previous coastal survey work was excellent training for such a job. Bache recommended him. George Davidson became an assistant in the U.S. Coast and Geodetic Survey team of California. In June of 1850 lie arrived in San Francisco Bay aboard the Tennessee. His first assignment involved two tasks: 1. fixing the longitude and latitude of prominent coastal bays and headlands 2. determining the best places for lighthouses on the California coast.

Davidson was a man of high energy and vigor. Once absorbed in a project, his devotion was indefatigable. He pursued and accomplished precise measurements even in the most difficult weather and environment. His reputation as an exact geographer made him sought after all over the world. By the end of his life he had first hand knowledge of almost every foot of the California coast. During his lifetime, he published 260 scientific papers, reports and books on a range of subjects such as: rainfall, earthquakes, geology, engineering, hieroglyphics, navigation, irrigation, land reclamation, measuring devices, volcanoes, climate, maps, astronomy, coast surveys, river routes, ocean currents etc. His early 700 page masterpiece Pacific Coast Pilot was in constant use by West Coast navigators for many years. In 1886 the San Francisco Board of Supervisors even asked him to do a study of the sewer system of the city. His conclusion was the city's sewers were the worst of any , except one, that he had seen in all his years of travel! Davidson studied routes and voyages of early explorers in his later years.

Scientific study and investigations in the field were Davidson's life. When he married it was no surprise he found a woman who came from a family of scientists. Ellinore Fauntelroy married George Davidson and they returned on November 14, 1858 to make San Francisco their permanent home. Her gracious, calm, controlled demeanor and quick mind made her opinions appealing to many. The George Davidsons were a fascinating couple and their home was often filled with equally fascinating people.

Throughout his life, George Davidson pursued the stars. His preoccupation during his high school years eventually became one of his life long occupations. In 1870, George Davidson, who never went to college, became professor of astronomy and geodesy at the University of California, Berkeley. In 1877, he joined the Board of Regents. Still following the stars, in 1879 George Davidson built the West Coast's first observatory in Lafayette Park, San Francisco. Bancroft noted, "Professor Davidson of San Francisco has a 6.4 inch object glass in a portable observatory at the corner of Octavia and Clay Streets." His enthusiasm for observing was so infectious that he influenced James Lick to finance an observatory on Mt. Hamilton. Davidson likewise persuaded the Oakland Public School District to build the Chabot Observatory, thereby crediting Oakland with the only public school district in America with its own observatory.

How fitting, how reasonable it was to honor Rancho San Miguel's highest point, closest to the stars, with the name of George Davidson, a man who spent his lifetime-observing the stars.