Originally published July 19, 2020, by the Western Neighborhoods Project at OpenSFHistory.org 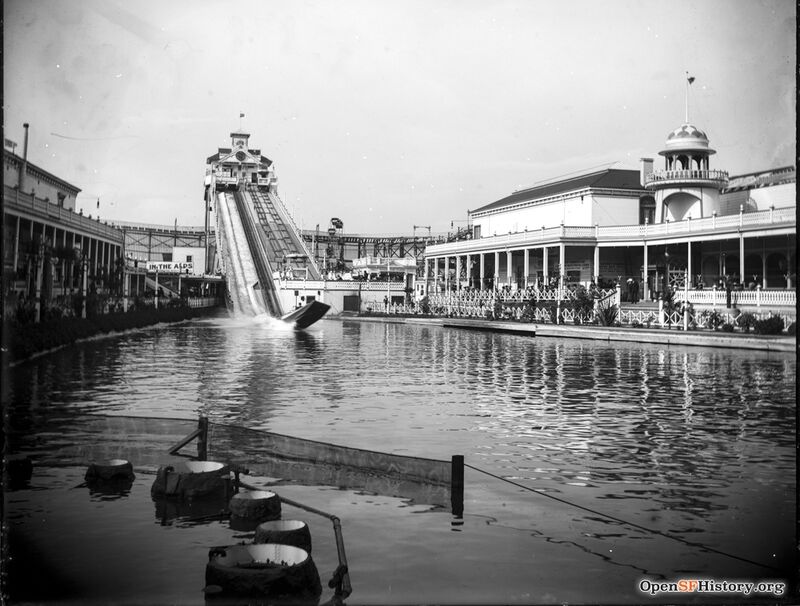 In Haight Street Chutes, we told you about a water ride amusement park in the Haight-Ashbury district from 1895 to 1902. However, the closure of the Haight Street Chutes was not the end of the Chutes story in San Francisco. Far from it. Charles Ackerman, the attorney and impresario behind the Chutes here, knew they were losing their lease on Haight Street, so his Chutes Realty Company purchased some land in the Richmond District and begin building a new Chutes theme park. The new Chutes filled the entire city block bounded by Fulton and Cabrillo Streets, and 10th and 11th Avenues.

After the Haight Street location closed on March 16, 1902, the attractions were moved to the new Fulton Street location. The Fulton Street Chutes opened on May 1, 1902. For the grand opening, a new larger Chutes theater was advertised, this time seating 4000 people. The featured attraction at the opening was Colonel Edward Beaupre, aka the French Giant, who stood 7 feet, ten and a half inches tall.(1) An estimated crowd of 12,000-15,000 showed for the opening day festivities.(2)

Within a few months, advertisements began mentioning that “motion” or “living” pictures would be shown at the Chutes theater. While not solely a movie theater, the Chutes Theater was the first theater in the Richmond District to show “moving pictures.” Hardy Downing and his “loop-the-loop” bicycle act signed on for a several month engagement that summer. All kinds of vaudeville acts continued to be booked into the theater. 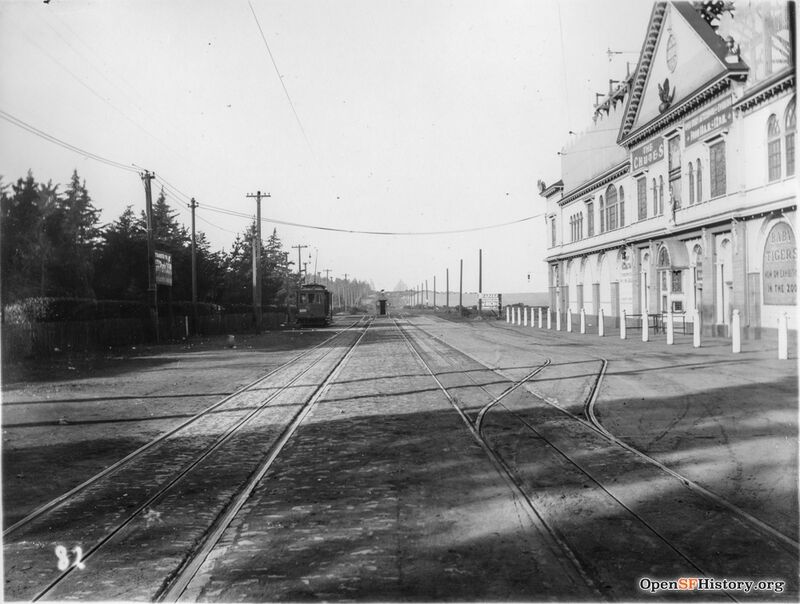 The tower end of the Chutes was located on the Cabrillo side of the complex with a lake down at the Fulton end that was larger than at Haight Street. Once again, the Scenic Railway ride circled the property on upper and lower tracks. The Fulton Street Chutes billed itself as the largest pleasure resort in America. With streetcars down Fulton Street, getting to the Fulton Chutes was relatively easy despite the majority of the City’s population living on the Bay side of San Francisco. Once there, visitors were treated to spectacular views (when it wasn’t foggy) from the grand building at the top of the Chutes tower. At the time, there was little other development and certainly nothing as tall as the 70-foot high tower that could block sight lines.

Also making the trip from Haight to Fulton Streets were the animals of the Chutes Zoo. The main animal attraction was Wallace the Lion. At the new Fulton location, his cage was adorned with Greek columns. The new Zoo was constructed to be more sanitary and better ventilated. The fact that this was noted in the news reports of the day might be an indication that the zoo at the Haight Street Chutes was not pleasant for the nose. The new monkey pavilion was described as “palatial.” Later, a giant Galapagos Turtle, claimed to be 500 years old, was added. 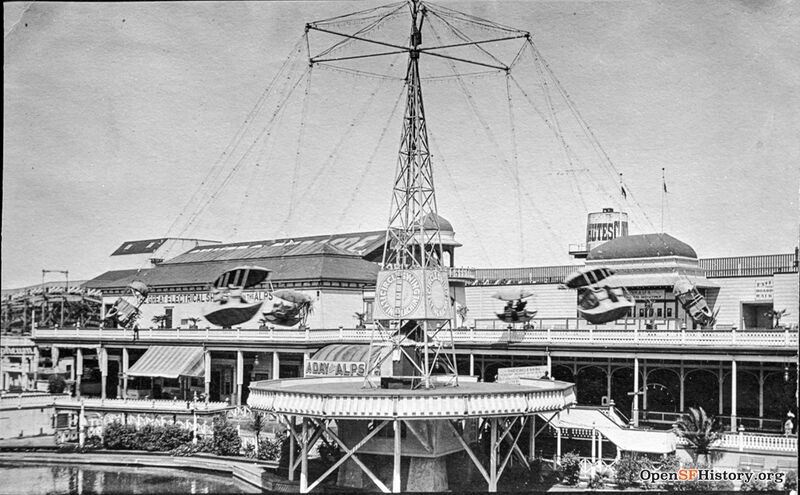 Circle Swing in action at Fulton Street Chutes, circa 1905.

The Fulton Chutes also continued with various forms of entertainment, such as shooting galleries, merry-go-round, roller skating rink, and a “Mystic Mirror Maze,” where there was a $5 reward for finding the “mysterious young lady.” There was also something called the “Infant Incubator,” where you could see a scientific demonstration of young babies being reared by artificial means. As with the Haight Street Chutes, Ackerman would continually add attractions to the Fulton Chutes to entice the public to visit. The most dazzling addition was the Circle Swing, which debuted on February 19, 1905. The Circle Swing loaded passengers into carriages attached to wires. The ride would then spin around and, as it picked up speed, the carriages would swing further out from the center.

To quote our illustrious Outside Lands podcasters, then something happened in 1906. The Fulton Chutes survived the April 18, 1906 earthquake in good condition as it was well-removed from the damage and fires happening on the east side of town. The Chutes closed during the relief efforts, but reopened on Sunday, May 20, 1906. A return to normal entertainment after a month of clean-up, rescue and resettlement in refugee camps resulted in heavy streetcar traffic to the Chutes.(3) The Chutes also struck a deal for the Orpheum Theater to move its calendar of events to the Chutes Theater. The Orpheum would continue to operate out of the Chutes Theater through January 20, 1907.(4) 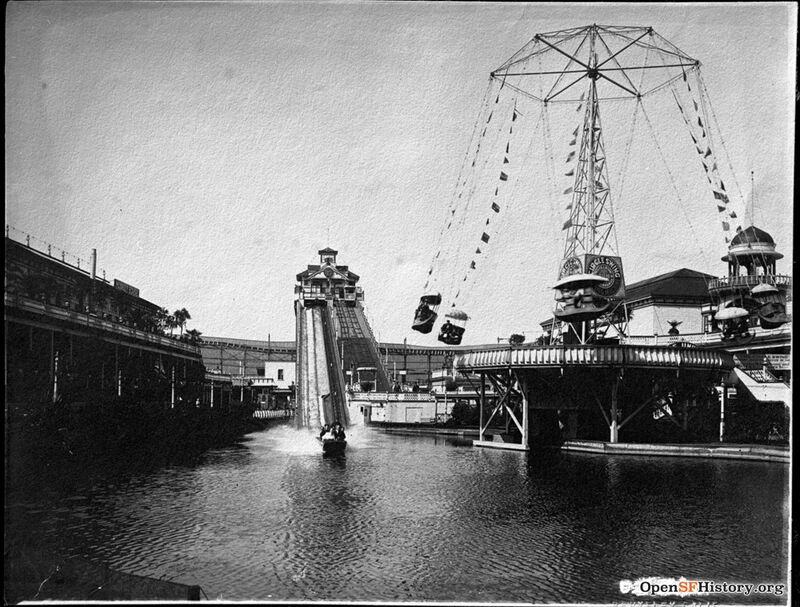 Fulton Chutes and Circle Swing, circa 1905.

As one of few places of merriment available after the earthquake, the Fulton Chutes did well. Thousands of people were now living nearby in Golden Gate Park, Park Presidio, and other smaller parks in refugee camps. However, a “new” downtown area in the Fillmore district got built up in the wake of the earthquake, which included another smaller amusement park called the Coney Island Amusement Park. As the refugee camps came to a close and the Fillmore District rose, attendance at the Fulton Chutes began to wane.

On January 25, 1909, Charles Ackerman passed away after a long illness.5 His wife Carrie inherited his estate, but management of the Chutes were taken over by his son Irving. Even prior to Charles Ackerman’s death, Irving was looking for a new site for the Chutes because of the declining crowds.(6) Within a few months, a new site was found and the Fulton Chutes would come to a close, although they kept the skating rink open and rented out the theater for events while the transition was made.(7) In December 1909, the Chutes property was sold to a developer who planned to build two-story homes.(8) Thus ended another chapter of the Chutes, but the Chutes story would continue. 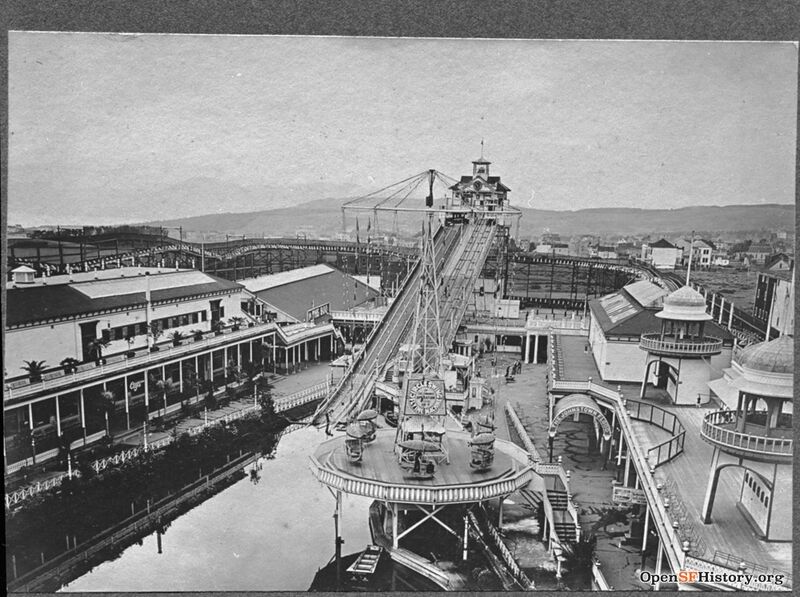 Elevated view of Fulton Chutes, circa 1907.

3. “Heavy Travel On All The Street-Car Lines: Thousands Sought Recreation in Suburbs and Other Thousands Came to the City,” San Francisco Chronicle, May 21, 1906, Second Section, p. 1.