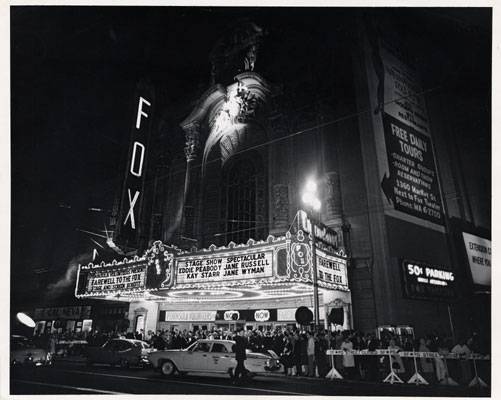 Hedda Hopper proclaimed from the stage, "I just cannot understand why this is happening!"

Local columnist Herb Caen wrote, "It's a wonder they didn't tear it down sooner."

With these two contrasting statements, the fabulous Fox Theatre closed its brass doors as the "Showplace of the West" on Saturday, February 16, 1963.

The Fox management presented four farewell events before the curtain fell for the final time. The "farewells" began on Friday night, February 8, at midnight. The theatre audience, jammed to its 4,651-seat capacity, witnessed organist George Wright and the 36-rank Crawford Special Wurlitzer theatre organ rise slowly out of the orchestra pit. This Friday night crowd was composed of many persons unable to purchase tickets for the Saturday night affair that had sold out two weeks in advance. 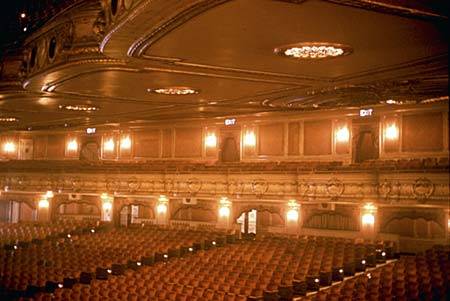 Saturday evening was George Wright's final "Farewell to the Fox." Honky-Tonk Train, Jerome Kern's Showboat, The Burning of Rome, Fascination, and Indian Love Call were just a few of the many selections played.

Midway through the second half of the program, George Wright removed his tie and coat, reminiscent of the many nights when he played alone in the theatre after closing time. Then the end came. With the playing of I Left My Heart in San Francisco and San Francisco, the organ console slowly descended into the orchestra pit. Both the organist and audience realized that the marquee would never again announce the appearance of "George Wright at the Fox Mighty Wurlitzer Theatre Pipe Organ."

The following Saturday evening, February 16, was the last night that William Fox's "greatest theatre in the world" would open as an entertainment cathedral. Those who were fortunate enough to obtain tickets arrived to see a searchlight shining into the night sky. Upon entering the lobby, the sound of the lobby Moller organ was heard emitting notes played from rolls. Some of the player rolls would not track correctly, but the organ was nonetheless heard "live" in the lobby. Many of the evening's ushers were also on duty at the theatre's opening night in 1929. 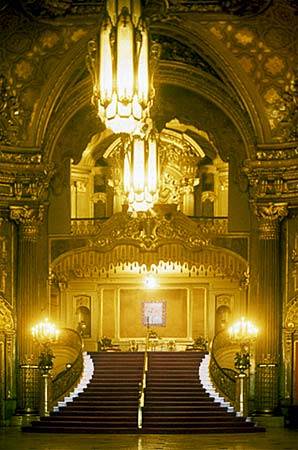 How could anyone help but notice the magnificent gold-leafed ceiling, rich tapestries, and antiques that graced the lobby? Many who were to sit in the balcony rode the elevators to the top. As the elevator doors opened, all could hear organist Everett Nourse playing at the console of the Fox Wurlitzer, located almost one block away. The organ never sounded better. Under the many hours work of Judd Walton, Bob Jacobus, and Bud Perry, the instrument was in fine condition.

The lights started to dim as the organ console descended into the pit. Following a short introduction by Vaughn Meader, the television production, Hollywood -- The Fabulous Era, was shown. As the film ended, Master of Ceremonies Paul Gilbert appeared on stage and announced that the overture was to begin.

The rising orchestra lift revealed Ray Hackett and the Fox Symphony Orchestra, the Kaiser Koristers, and Everett Nourse at the organ. The final note of the overture included full orchestra, chorus, and organ together. To many, this could have been the finale, and most would have been satisfied. But there was more -- much more.

A stage show followed, featuring vaudeville "greats" such as Joaquin Garay and Eddie Peabody. And there were motion picture and recording stars by the carload: Kay Starr, Jane Russell, Richard Egan, Lois Moran, Jane Wyman, Hedda Hopper, and a host of others. Under the direction of Herman Kersken, the first manager of the Fox, the show was exceptionally well produced.

When the curtain went up for the finale, the entire cast was on stage. There was no set and only the bare back wall framed the scene. As members of the cast sang Auld Lang Syne, they slowly left the stage, leaving only one work light glowing. With the stage bare, the orchestra and organ console hidden at the bottom of the orchestra pit, one lone stagehand walked across the vast stage, put out his cigarette, and turned off the work light. The San Francisco Fox Theatre would soon be reduced to dust.

After the show, Ray Hackett and his orchestra played for dancing on the stage. During the break before the dancing, the organ was played. It marked the final time the public would hear this organ in the theatre.

This is a couple of excerpts from "The Fabulous Fox" made by Bartel-Thomsen in 1988.

Sunday, February 17, 1963. The candy and popcorn have been removed and replaced by sales books. The projectors are silent. Guards have replaced ushers. Tickets have been replaced by sales tags. Everything is for sale ... except memories. A bronze door is sold for $250. A diamond horseshoe seat for $2.50. Ashtrays, 90 for $25. The sale started at 9:00 in the morning and continued until 5:00. FM radio's "Farewell to the Fox" then followed. The program was presented by local station KPEN at 8:00 p.m. The first half-hour consisted of interviews with many who were involved in the theatre's history. At 8:30, James Gabbert announced that this would be the last time the Fox Wurlitzer would be heard in its original home. Organists Everett Nourse and "Tiny" James shared the bill for one hour, concluding the broadcast with "San Francisco."

A short epitaph was offered by the last manager of the Fox Theatre, Bob Apple:

original source for text and images