Originally written as a Masters Thesis, this is the third of a sequence of pages adapted from the full thesis. For the bibliographic references in the text go here. 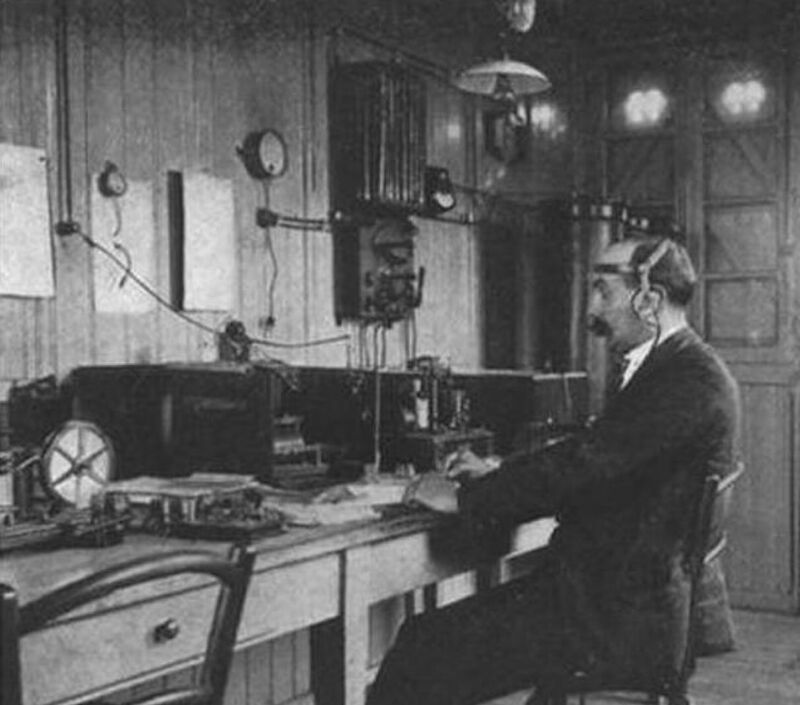 The link between electric power and electronics can be illustrated by an account of the career of Cyril Elwell, a young Australian electrician who emigrated to San Francisco in 1902 with the purpose of obtaining an electrical engineering degree from Stanford. Elwell was admitted and upon graduation decided to remain at Stanford for a masters degree instead of moving to to the east coast to work for General Electric, as most of his classmates did. When the 1906 earthquake hit the Bay Area, Stanford was badly damaged. The electricians and stone masons, whose services were in sudden demand, went on strike seeking a fifty percent wage increase. Elwell organized his classmates to do the electrical work at Stanford, helping to break the strike on campus. For this, Elwell was rewarded by the trustees of Stanford with an undemanding night electrician's job that helped support him through his graduate studies (Rosa, 1960).

In 1907, Elwell wrote a master's thesis on the electrical reduction of iron ore for Perrine's successor as head of the Electrical Engineering Department at Stanford, Harris Ryan.(10) The problem was presented to Elwell, through his professors, by H.H. Noble of the Northern California Power Company (NCPC), who was using Stanford to help develop an experimental electric furnace capable of producing one ton of pig iron daily.(11) Upon graduation, Elwell was asked to write the specifications for the transformer for the system.

When General Electric Company, located in Schenectady, New York, informed the team that the transformer Elwell had designed would take ten months to deliver, Elwell stated that he could build it in six weeks. With the help of Ryan, Elwell finished on schedule and was hired by the NCPC to design a series of furnaces capable of producing 15 tons of pig iron daily. Elwell was paid $1,000 for his efforts and began a career in electro-metallurgy (Rosa, 1960).

Elwell was on his way to a promising career with NCPC when, in 1908, he received a request to evaluate the commercial potential of a wireless telephony system backed by two Oakland bankers, the Henshaw brothers. Elwell had been recommended to the bankers by Ryan. The Henshaw brothers had invested a significant sum of money in the development of the system but the inventor, Ignatus McCarty, had been killed when the horse car he was driving overturned. Elwell turned them down at first; he was spending a great deal of time consulting with the General Electric Company in Schenectady on the design of the 22,000 amp transformers he was developing for the NCPC. When Ryan reiterated to the Henshaw brothers that Elwell was the best person for the job, the bankers renewed their request, offering Elwell a large sum of money. Since Elwell had completed his consulting work with General Electric for the time being, and had a hiatus while the transformers were being built, he accepted the Henshaw Brother's second request, bringing the McCarty apparatus to a vacant attic at Stanford for evaluation.(12) (Rosa, 1960) 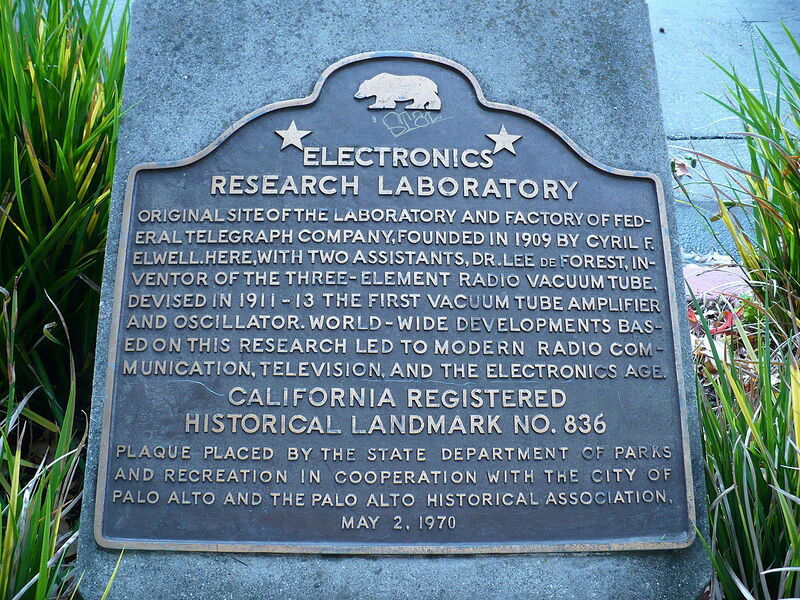 Elwell had developed an interest in radio while a student at Stanford, and he felt that a system based on damped radio waves produced by Marconi-type spark transmitter would prove ineffective for sending voice messages over distances long enough to compete commercially with wire telephony, which was expanding rapidly at the time. As Elwell expected, the system failed to be practical for distances over five miles. Elwell knew, as did most people working in the field at the time, that continuous (or carrier) waves were better suited to voice transmission than damped waves, which were emitted in pulses that were well suited to the dots and dashes of morse code used in telegraphy.(13) The problem of the day was in developing an efficient continuous radio wave generator. When at General Electric Elwell had been shown a 2kw alternator that ran at 20,000 rpm and was capable of generating continuous waves. The alternator was commissioned by an inventor from Pittsburgh, Reginald Fessenden, who had begun his own wireless company, the National Electric Signalling Company (NESCO), to compete against Marconi and the telegraph companies in telegraphy, and the Bell company in telephony.(14) In Palo Alto, Elwell tried to build a Fessenden-type alternator, but failed (Rosa, 1960).

While on vacation as a teenager with his parents, Elwell had been present at the Paris Exposition of 1900, where Dr. Vladimir Poulsen, a Danish telephone engineer, won the Grand Prix for his exhibit of radio telegraphy using the Poulsen arc, which generated continuous waves. In 1902 Poulsen generated frequencies high enough to transmit voice when he placed the electric arc in an atmosphere of hydrogen. The arc operated within a strong magnetic field, had no moving parts, and was therefore quieter and more reliable than Fessenden-type alternators, which spun at very high speeds and tended to fail spectacularly. Elwell, frustrated with his work with the spark transmitter and the alternator, wired Dr. Poulsen about the possibility of acquiring the U.S. patent rights for the Poulsen arc. 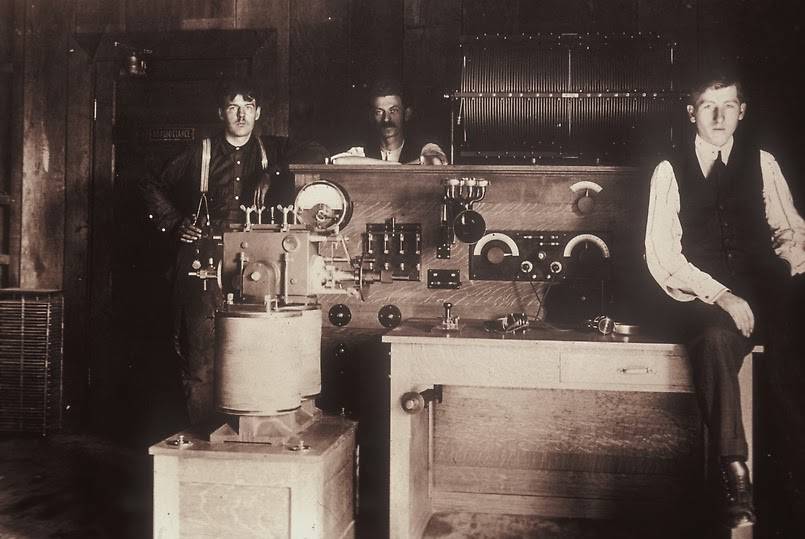 The Poulsen arc transmitter and its early technicians.

When the reply came offering Elwell the rights for $250,000, Elwell immediately traveled to Copenhagen to inspect the Poulsen system, which could transmit speech messages ten miles, and telegraph signals 180 miles. Elwell was very impressed at the clarity of the speech transmission and determined to take the Poulsen system into commercial development. He purchased the option on the patent rights and went to New York City, where he unsuccessfully courted investors, including a Mr. Lindlay, who had raised the capital to start AT&T. Undaunted, Elwell returned to Copenhagen where he struck a deal allowing incremental payment terms if the patents purchased included those on the telegraphone, a recorder that allowed telegraph messages to be deciphered after reception. The price, including this device, was raised to $450,000. Elwell agreed to this price on the condition that the patent rights cover not only the United States, but all United States possessions as well (Rosa, 1960). Clearly, Elwell was already thinking of establishing a global communications system with the Poulsen arc.

On his return to Palo Alto in 1909, Elwell found that the Henshaw brothers had no further interests in the development of a radio system, and were willing to sell him the McCarty apparatus cheaply. His career in electro-metallurgy now forgone, Elwell turned to David Starr Jordan, the president of Stanford (who put in $500), and C.D. Marx, the head of Stanford's Civil Engineering Department, to finance a new company to provide wireless telephone and telegraph services on the Pacific coast. Thus the Poulsen Wireless Telephone and Telegraph Company was born. Elwell had shipped a 12kw arc transmitter back with him from Copenhagen.(15) He set to work installing a demonstration system that was able to send telephone and telegraph messages from San Francisco to Sacramento. Elwell publicized the system well, inviting the public to demonstration of wireless voice transmission, a phenomena that was still extremely novel. The mayor of Sacramento, wealthy Chinese merchants, and bank executives all tried the system. Beach Thompson, representing a group of San Francisco financiers, including the Crocker family,(16) invested in the company. Beach Thompson became president, Elwell was named chief engineer, and the company was renamed Federal Telegraph Company (Rosa, 1960; Morgan, 1967; Grass Roots Writing Collective, 1969).

10. Ryan worked closely with the power companies, particularly on problems associated with insulation. He set up physical test models to arrive at specifications for various elements of the transmission systems being installed. Ryan conducted these experiments at no charge to the power companies. In 1925, local power companies provided money for the Ryan Electric Laboratory, with equipment donated by General Electric and Westinghouse. According to Fred Terman, this lab was built "at the end of an era looking backward" because most of the important work had already been done. "By the late 1920s [most of the students] began to be interested in electronics rather than electric power. The electronics industry became attractive employers [sic], not the power industry." (Terman, 1978)

11. Electric reduction of iron ore was necessitated by the high cost of coke, which had to be shipped in from the East.

12. This was the same attic that would become Fred Terman's Communications Laboratory in 1925. The experiments were conducted during the summer, and the campus was largely deserted. One person on campus was Timothy Hopkins, a trustee of the university and the foster son of railroad magnate Mark Hopkins. Timothy Hopkins, who had laid out original the plan for the town that became Palo Alto (Scott, 1985), was then the director of the Pacific Telephone and Telegraph Company, involved in the rapidly expanding wire communications systems in the West. When Hopkins learned of Elwell's activities, he came to him and said, "I understand that you are experimenting with wireless telephony on the campus. I won't have it done. You get your apparatus off the campus at once!" Elwell finished his work in a rented house in Palo Alto. (Rosa, 1960) This incident is indicative of a larger attempt by wire telegraph and telephone interests of the period (such as Western Union and the Bell Company) to stifle progress in radio communications. By 1902, Western Union had 1,000,000 miles of telegraph cable installed and gross revenues of $29,000,000; the telephone system consisted of 1,317,000 Bell-owned stations and 1,054,000 independently owned stations licensed under Bell patents. (MacLaurin, 1949) These companies were not interested in promoting technology that would eliminate the need for transmission lines. This is why the first radio applications were ship to shore, where the use of wire transmission was impossible, and why the Navy took the leading role in developing worldwide radio communications networks during World War I.

14. Fessenden had patented his alternator in 1902. By 1906 he was able to broadcast speech and music over a wide area. His first large contract was with the United Fruit Company, which needed stronger transmitters to overcome severe static problems associated with the tropics. GE eventually gained control over this technology, and by 1920 was producing 200kw alternators designed by Ernst Alexanderson. For a very brief period, the Alexanderson alternator was the best system for transmitting radio signals over long distances. It was supplanted by short wave transmission using vacuum tube technology.

15. This transmitter is now at the Perham Electronic Museum in New Almeden, CA.

16. Charles Crocker was the son of one of the "Big Four" transcontinental railroad magnates, including Colis Huntington, Mark Hopkins, and Leland Stanford.