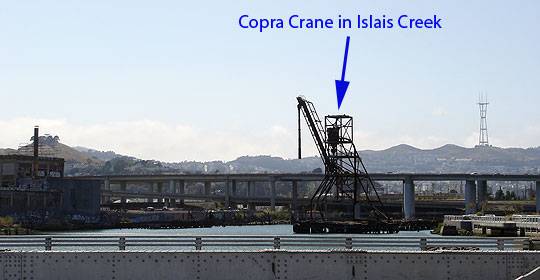 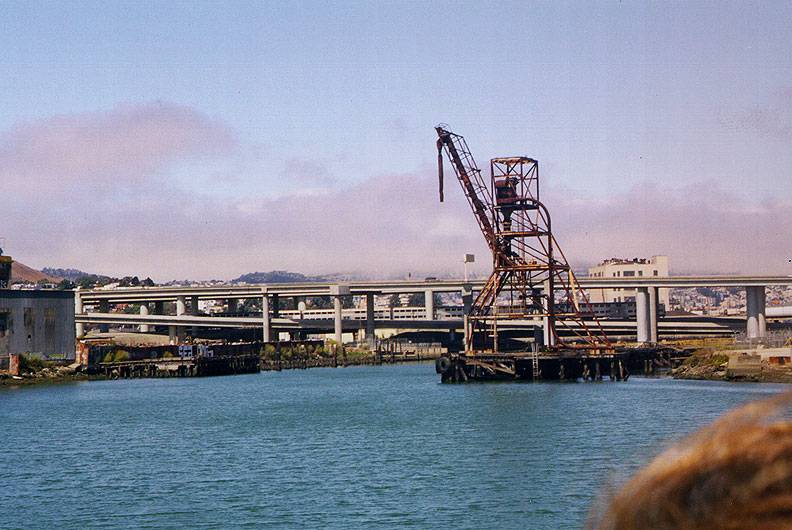 The Copra Crane, located on the Islais Creek Channel, dates back to a time when coconut meat, also known as copra, was imported from the Philippines and pressed into coconut oil at the nearby Cargill Mill.

ILWU Local 10 longshoremen worked the pier, using picks and shovels to break up the large pieces of copra in the ships' hulls. A large suction pump known as a blower then moved the copra pieces to the mill where ILWU Local 6 members processed it into oil. The remaining "copra meal" was pressed into pellets, put into 100 pound sacks and the warehousemen prepared it to be shipped across the bay to warehouses at Colgate-Palmolive-Peet and McKessin-Robbins. The crane was used to load the copra meal onto outbound ships. 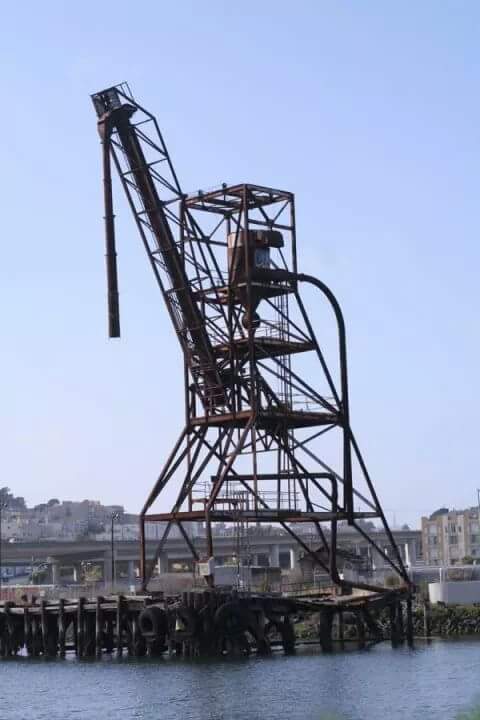 The crane and the mill have not been in use since the mid-1970s. Currently they are owned by the San Francisco Municipal Railway, the city's public transit agency, which had plans to demolish both.

But Julia Viera, a local resident who dreamed of building a park at the area, organized her neighbors into the "Friends of Islais Creek Channel." The group persuaded Muni to postpone destroying the crane until it could raise the money to build the park, a much-needed open space in the often neglected Bayview/Hunter's Point neighborhood, and create a historic labor landmark.

At the mini-park on the south side of the channel the Friends of the Urban Forest have planted trees. The north side of the channel where the crane is located will be developed into a park featuring a 700 foot promenade and a museum (a refurbished walking bosses' shack) with photos, artifacts and written history. Industrial artifacts from the copra processing plant are being salvaged and will be used as sculptures throughout the park. 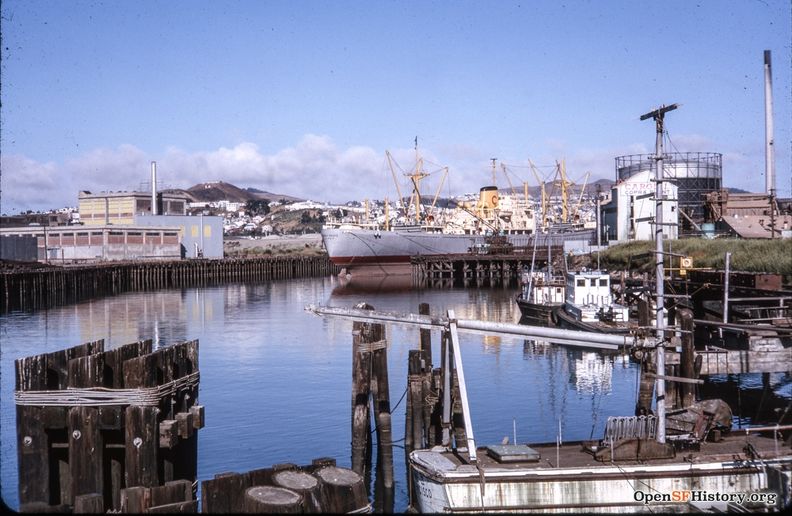 Walking Boss Local 91 foremen Bud Riggs, Will Whitaker and Joe Amyes have been helping to piece together the story of the crane and of Pier 84. ILWU oral historian Harvey Schwartz (author of the book "The March Inland" on ILWU warehouse organizing in the 1930s) also has been gathering the history of the crane, pier 84 and the Cargill Mill, interviewing people who worked there. Here are a few excerpts:

When I started at the copra dock in 1948, the method of removing copra, which was a bulk cargo, was by means of a vacuum situation. The copra had been in the ship for a while, and it got solid in there. So it was a pick and shovel job. It was hard work. You worked 20 minutes with a pick, 20 minutes with a shovel, and you had 20 minutes off. Copra at the bottom, where moisture collected and it rotted, smelled like hell. The copra was full of copra bugs. They’d get in your nose, in your mouth, in your eyes and down your neck.

The water [of Islais Creek] was black and bubbling. I believe the sewer was draining in there. Besides the copra, the creek itself smelled. Yes, there was a copra smell, like smoked coconut. You work fifteen minutes into it and you don’t smell it anymore until you went home and your wife or mother or whomever you went to said, “What the hell’s wrong with you? You stink!”

When I talk to civic groups about this project, I like to show slides comparing the Copra Crane with the new red steel sculpture at South Beach Park. They are roughly the same size and shape, but the old crane still capable of doing the job, is a true symbol of the union labor which was the life of this port for generations.

The Copra Crane on San Francisco’s Islais Creek is a highly visible reminder of toil on the waterfront. It symbolizes a worldwide process -- harvesting coconuts from palm trees on Pacific plantations; shipping and unloading dried copra; processing the copra for oil for food, soap, perfume, and medicine; and recycling the residue for animal feed. Islais Creek, once the home of tanneries, canneries, and slaughterhouses, meant both welcome jobs and careless damage to a bay inlet. As factories faced obsolescence, they were abandoned. In the last decade, community conservationists and preservationists have banded together to restore the natural creek, and return wildlife to its shores. Islais Creek marks a story not yet ended. Where enterprise meets environment, the earth’s fate is in the balance. The Copra Crane, a labor landmark, represents demanding work. It is also a dramatic industrial structure, as well as a signpost along humanity’s road. 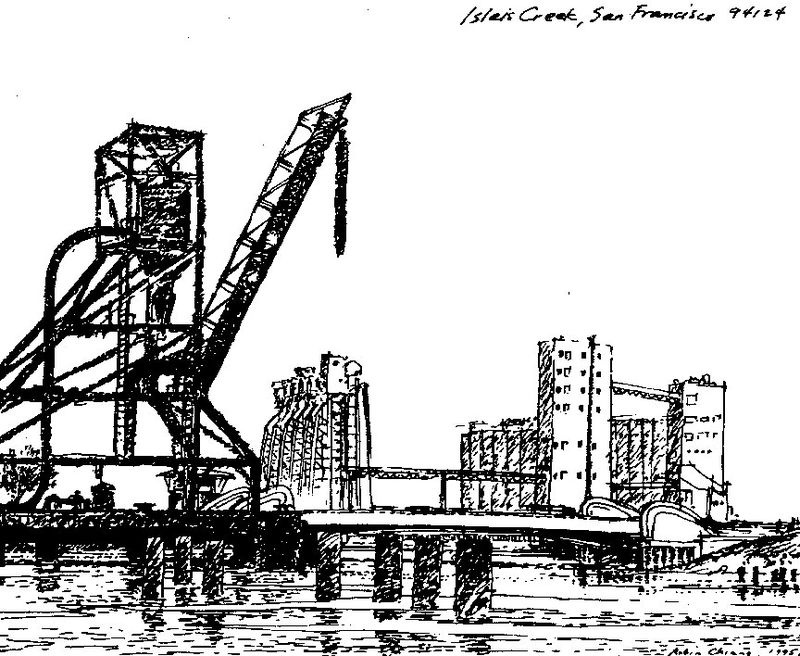 Line drawing done for campaign to save the Copra Crane

The Copra Crane has been the subject of a campaign to save it as a monument to the old days of longshoring at the creek. Aerial dancers "re-purpose" the Copra Crane on Islais Creek for a stunning dance performance in 1999. 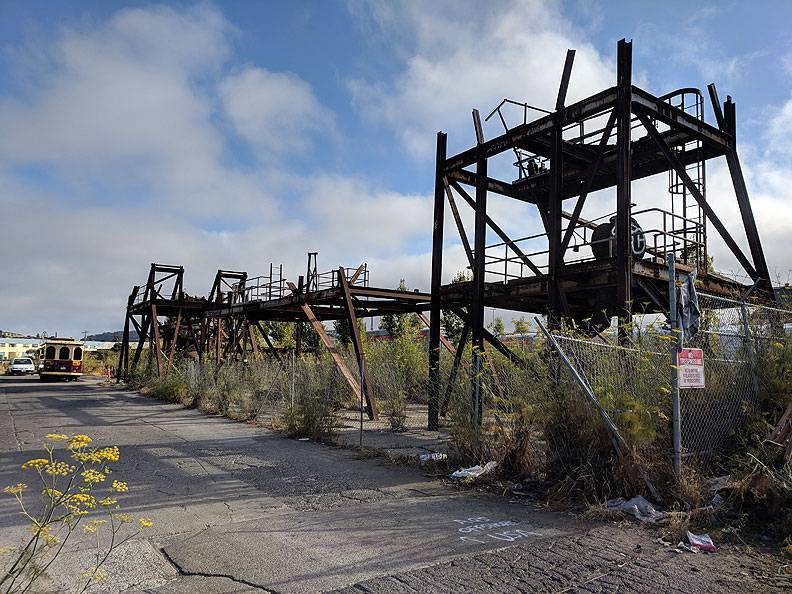 Slowly distintegrating into the pavement, the Copra Crane lies in pieces on Tennessee Street next to Islais Creek, 2018.

back to Islais Creek Remembered