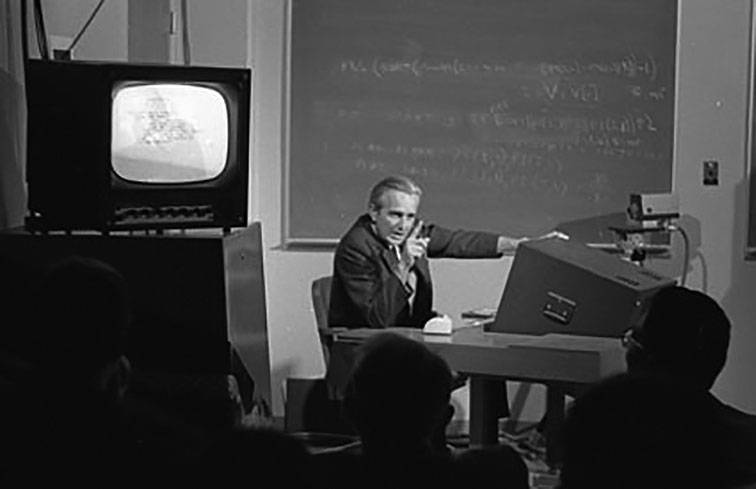 On December 9th, 1968, at a presentation at the Fall Joint Computer Conference in San Francisco, engineer Doug Engelbart stunned the audience in a 90-minute presentation that later became known as “the Mother of all Demos.” The talk introduced the computer mouse for the first time and incorporated concepts such as social networking, bitmapped screens and windows, teleconferencing, and real-time collaboration which would become fundamental to personal computing. (3) The blockbuster event appeared to some to herald a new age in the tech industry, but truthfully the philosophy behind Engelbart’s work, which focused on user-friendly interfaces and accessible computing rather than automation, had been stirring around the Bay Area for some time already. The unique blend of technological and cultural forces in San Francisco during the 1960s—the meeting of counterculture and cyberculture—made the computer what it is today.

Douglas Engelbart began his work in computer science because he wanted to improve the world. Walter Isaacson describes in The Innovators a reflective moment of Engelbart’s, following his engagement to his future wife: “He thought about people who tried to fight malaria or increase food production in poor areas and discovered that led to a complex array of other issues, such as overpopulation and soil erosion. To succeed at any ambitious project, you had to assess all of the intricate ramifications of an action, weigh probabilities, share information, organize people, and more.” Engelbart realized that if he could make it easier for people to use computers, it would reduce the enormous complexity of these tasks—and provide a means for Engelbart to use his engineering background for the benefit of society. Although Engelbart personally imagined and designed nearly every feature he demonstrated, he was less of a showman than Stewart Brand, who was behind the more theatric elements of Engelbart’s presentation. The two met at a Stanford lab, and experimented with LSD together. (4)

The potent intersection of tech and cultural movements is embodied in Brand, a prominent figure of the counterculture. In the years prior, Brand had collaborated with USCO, a New York-based art troupe that used electronics including strobe lights, projectors, and stereo speakers to transform the viewers’ collective consciousness (usually with the additional assistance of psychedelic drugs), as well as Ken Kesey and the Merry Pranksters, who Brand took to see Engelbart’s lab. According to Fred Turner’s From Counterculture to Cyberculture, “To Brand the Pranksters were a West Coast version of USCO’s techno-tribalism. If USCO had emerged out of an East Coast engagement with cold war avant-garde art, the Pranksters drew on the bohemian energy of San Francisco’s Beatnik scene.” Brand’s experiences with USCO and the Pranksters introduced him to the ideas of Buckminster Fuller and the larger New Communalist movement. Brand began to envision a nonhierarchical future, with individuals empowered by tools, and this vision led him to create the Whole Earth Catalog. (9) 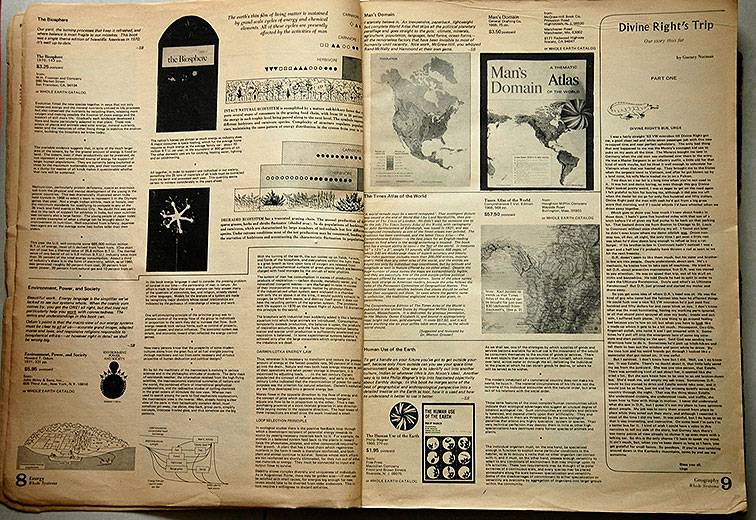 A spread from the Whole Earth Catalog.

The Whole Earth Catalog, described by Steve Jobs in 2005 as the Google of his generation, was a mishmash of reviews, articles, and miscellaneous tips for living sustainably. Of the periodical’s embrace of technology, its founder Stewart Brand said:

At a time when the New Left was calling for grass-roots political (i.e., referred) power, Whole Earth eschewed politics and pushed grassroots direct power—tools and skills. At a time when New Age hippies were deploring the intellectual world of arid abstractions, Whole Earth pushed science, intellectual endeavor, and new technology as well as old. As a result, when the most empowering tool of the century came along—personal computers (resisted by the New Left and despised by the New Age)—Whole Earth was in the thick of the development from the beginning. (1)

The catalog was published by the Portola Institute, a nonprofit educational foundation in Menlo Park that included various alternative education projects. One of these was computer education for all grade levels, an effort led by Bob Albrecht. “While living in San Francisco at the top of the crookedest street, Lombard, I frequently ran computer programming, wine tasting, and Greek dancing parties,” said Albrecht, who also opened a public-access computer center and took his younger students on field trips to labs including Doug Engelbart’s Augmentation Research Center. (4) 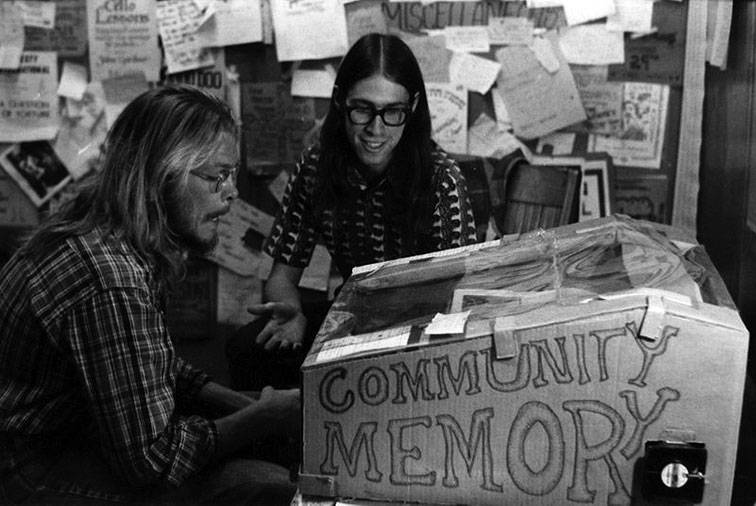 First iteration of the Community Memory Project in Berkeley, 1974.

With Bob Albrecht, weekly dinners were held at the People’s Computer Center, and one of the regular attendees was Lee Felsenstein, who had spent his time at Berkeley studying electrical engineering and protesting the Vietnam War. Felsenstein and some friends, in searching for others with similar interests,recognized a use for public computer access, and the Community Memory Project. Community Memory was built to store and share information: users could post messages to the public, anonymously or not, and view the assortment of advertisements, poems, opinions, and other odds and ends already posted, like an electronic bulletin board.(2) The project was a part of the technological mission (Resource One) of the Project One warehouse, a communal learning environment that was, like Stewart Brand, inspired by Buckminster Fuller. Terminals were set up in public locations, beginning with Leopold’s Records in Berkeley, and including sites such as the Berkeley Whole Earth Access Store and the Mission Public Library in San Francisco. Community Memory was also tied to Doug Engelbart and his demo: the software ran on a timesharing system that, before it had been donated to Resource One, was used by Engelbart for his famous presentation. (2)

Among those sitting in the audience the day of the demonstration was Alan Kay, who followed Engelbart’s work at the Augmentation Research Center and was reinvigorated in his quest to build a personal computer by the progress he saw before him. Kay was recruited to work at Xerox PARC and dreamed of creating a truly portable PC, one the size of a notebook that a child could operate.Stewart Brand interviewed Kay at Xerox PARC for a 1972 article on emerging technologies in Silicon Valley, and enthusiastically wrote that the research there had moved “away from hugeness and centrality, toward the small and the personal, toward putting the maximum computer power in the hands of every individual who wants it.” (4) This new focus, and the preceding technological innovations that made it possible, also enabled hobbyists not affiliated with large corporations or research institutions to buy their own machines and make modifications as they saw fit. The combination of do-it-yourself opportunity and the communalist mentality of knowledge-sharing manifested in the Homebrew Computer Club.

The Homebrew Computer Club, whose founders met at the Community Computer Center in Menlo Park, was a biweekly meeting for computer enthusiasts to swap parts and share ideas and circuitry designs for building homebrewed computers. It took place in a garage, and Lee Felsenstein served as moderator for the sessions, whose members went on to found several companies in the technology industry. Most notably, Steve Wozniak built the Apple I after he was enthralled by the first Homebrew Computer Club meeting. When Wozniak and Steve Jobs founded Apple, they toured Xerox PARC and licensed several of the developments that Kay and his team had made. (4) The results of those visits are well-known: Apple was first to market with a commercial personal computer intended for the masses, and became an incredibly successful multinational company.

Indeed, when one considers the technology industry today, one thinks not of individuals empowered to take on the system, but of large companies like Google, Microsoft, and Facebook as well as countless ephemeral startups driven by venture capital. The industry today bears little resemblance to the utopia envisioned by some of the earliest computer researchers. Stewart Brand, often cited as the central node in the network between hippies and tech, continued his involvement as an Internet evangelist, and eventually disappointed some by allying with Newt Gingrich and big business on the web during the “Republican Revolution” of the mid-1990s. Some, including the historian Fred Turner, critique this move as a betrayal of the political activist ideals of the counterculture, whereas others, including RU Sirius, best known as the publisher of the magazine Mondo 2000, are more sympathetic: “Oppositional activism would be even more occult — more hidden from view — today if not for networks built by hippie types who were not averse to working with DARPA and with big corporations. The world is a complex place.” (7)

Several factors contributed to the San Francisco Bay Area becoming the birthplace of the personal computer; certainly, the influx of defense contractors and establishment of the Stanford Research Institute and Stanford Research Park contributed to the area’s dominance in the industry. But East Coast institutions had older, stronger ties to government funding and computing research. It was the blending of formal research institutions and the do-it-yourself hacker ethos that set the Bay Area apart, the San Francisco counterculture that influenced mainstream culture. Doug Engelbart, Bob Albrecht, Stewart Brand, Lee Felsenstein, Alan Kay and countless others involved shunned traditional institutional authority in favor of putting power in the hands of individuals. They saw technology as an equalizer, the Internet as a democratic community that could give a voice to the alternative. While tech is increasingly commodified, movements for educational equity and open-source software pay homage to this vision today.