by Gretchen Lemke-Santangelo and Charles Wollenberg

Between 1940 and 1945, thousands of African Americans migrated from the South to the San Francisco Bay Area in search of social and economic mobility associated with the region's expanding defense industry and reputation for racial tolerance. Prior to the war, San Francisco's black population was small and tightly-knit. But the wartime economic boom, fueled by federal investment in shipbuilding and repair, changed the city's demographic landscape. African Americans from the South who heard about defense jobs from labor recruiters, from railroad workers, at employment bureaus, from newspapers and, most important, by word of mouth joined thousands of white workers in a westward exodus. As a consequence, San Francisco's black population grew significantly, expanding from less than 5,000 just before the war to approximately 32,000 in 1945—an increase of 665.8 percent. 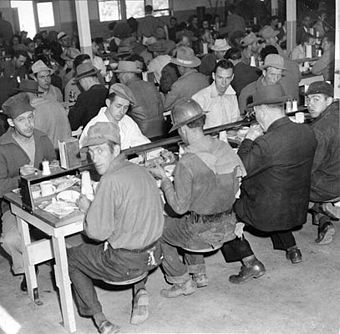 Some of the new arrivals ended up at Hunters Point. It had been the site of ship building and repair facilities since the late nineteenth century, and in 1939 the Navy purchased the private yards and created The Hunters Point Naval Shipyard, which operated as a ship repair facility throughout the war. It was one of several large-scale defense industries that drew migrants —white and black—to the San Francisco Bay Area. Indeed, Hunters Point, along with such enterprises as Kaiser shipyards in Richmond, Marinship in Sausalito, Moore Dry Dock Company in Oakland, and Mare Island shipyard in Vallejo, transformed the Bay Area into the nation's premier shipbuilding and repair center.

The Shipyard, Jobs and Population Change

Hunters Point Naval Shipyard, one of the largest wartime employers in San Francisco, provided between 17,000 and 18,500 jobs during the peak years of the conflict.

Just as significantly, the Navy built housing to accommodate the white and black migrants who worked at this facility. Initially constructed as barrack-like dormitories for single workers, these dwellings were converted to family units in 1944 when the San Francisco Housing Authority took over their administration. By the end of the war, Hunters Point defense housing was fully occupied by white and black families. However, white residents soon began to leave, drawn to the suburbs by affordable housing and postwar job opportunities. African American residents, whose mobility was limited by housing and employment discrimination, remained. And units once occupied by whites were filled by black veterans and former war workers from other parts of the region. 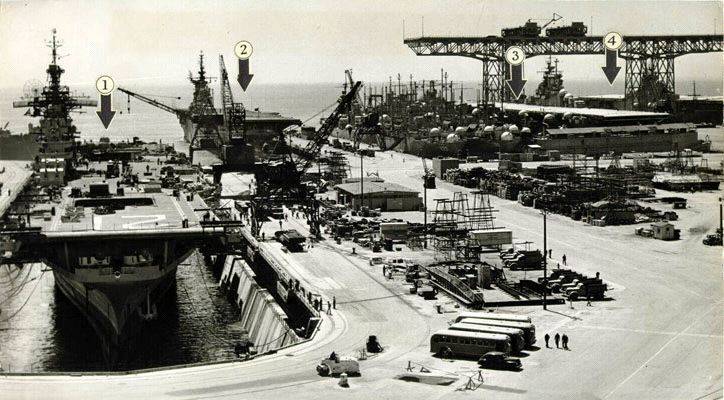 By 1950, the Hunters Point census tract, which included part of the Bayview neighborhood as well as the housing project, was 43 percent black—a percentage that increased to 65 percent by 1960 as redevelopment in San Francisco's Western Addition neighborhood displaced thousands of black residents, mostly wartime migrants and their children, to the "Hill." Many newcomers found housing in the old Navy projects, which were not replaced until the late 1960s, and in new public housing units constructed in Hunters Point by the Housing Authority in the 1950s. Other migrants spread out to the East, buying or renting homes that were vacated by fleeing whites. Thus, the "Hill," became part of a larger black community within what is now known as Bayview-Hunters Point By 1980, the South Bayshore population was 79 percent African American, a percentage that declined to 62.5 percent in 1990 as other ethnic groups, including Polynesians, Asians, and Latinos, contributed to the area's diversity.

Although this community has evolved over time, its origins are firmly rooted in wartime migration to the San Francisco Bay Area. Federal spending on the war effort transformed San Francisco into a virtual Canaan for both white and black workers, but African American migrants came to places like Hunters Point for more than jobs. Most were young adults whose futures were clouded by the ugly realities of Jim Crow segregation and white violence. The West Coast defense boom provided a rare historical advantage, one that offered escape from the limits imposed on the lives of their parents and grandparents. Maya Angelou, who arrived in San Francisco during the war, put it this way: In the South "white kids were going to have a chance to become Galileos and Madame Curies and Edisons and Gauguins, and our boys (the girls weren't even in on it) would try to be Jesse Owenses and Joe Louises.... We were maids and farmers, handymen and washerwomen, and anything higher that we aspired to was farcical and presumptuous."

Wartime studies of Bay Area black migrants provide some demographic background on adventurous newcomers like Maya Angelou. Most came from Texas, Louisiana, Mississippi, Arkansas, and Oklahoma, and tended to retain strong ties to their place of origin. Long after the war ended, migrants continued to encourage friends and family to move West, or returned regularly to the South for extended visits. Just as significantly, they transplanted their southern cultural heritage to their new communities: religious values, culinary traditions, speech patterns and mannerisms, music, crafts, folklore, etiquette, and aesthetic sensibilities. Rather than denying where they came from, migrants drew on their southerness to create a sense of community in their new surroundings. And in the process, they dramatically transformed, and enriched San Francisco's cultural landscape.

Most migrants were relatively young (average age of 23), had skill and educational levels roughly comparable to those of white migrants, tended to settle in extended family units, and came from towns and cities, rather than from rural, farming backgrounds. In other words, they came with the youthful energy, familial motivation, and practical experience necessary to adapt to their new environment, a profl1e that ran counter to stereotypes of newcomers—advanced by white and black established residents—as immoral, lazy, and ultimately unassimilable.

They also appeared to have a heightened sense of race consciousness. Even hostile old-timers were forced to admit that newcomers were determined to transcend prewar racial boundaries. For example, a native black Californian commented that "before the war blacks had to do for, themselves. In California we didn't have anything. We just got the crumbs. We resented the influx because we thought we were doing the right thing. But we weren't doing a thing. We were really the bottom of the bucket, working as stock clerks and maids. Newcomers came in and called attention to what we were denied. When they came out here they felt this was the land of milk: and honey, and they were going to have some because they never had anything anyway." 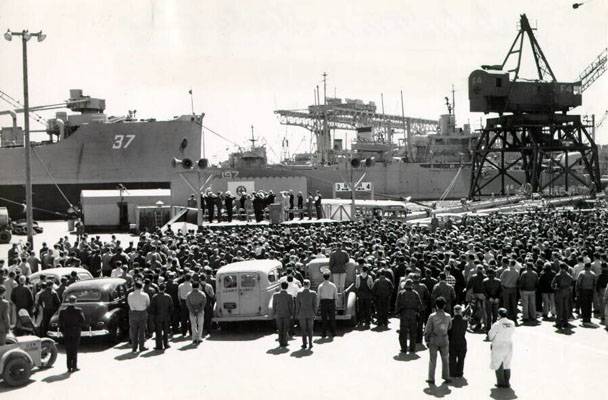 Migrants, leaving the South for what they hoped would be the Promised Land, came with a long tradition of self-help—a tradition of creating schools, churches, fraternal organizations, and political institutions that allowed them to survive the pain and humiliation of Jim Crow. As one migrant observed, "in the South black people had to be self-supporting. That's why you see so many more professionals there. They had their own businesses and schools. The blacks in the South had learned to work for themselves. "When they arrived in the Bay Area and confronted unanticipated racial hostility, migrants drew upon this self-help tradition to build institutions that nourished their new communities and challenged long-standing patterns of racial discrimination. In Hunters Point migrants wasted no time in putting down roots, establishing the Crispus Attucks Club in 1944. Named for the black patriot killed in the Boston Massacre, this organization set the stage for a long, ongoing history of institution-building and community activism in the Bayview.

The Ideal and the Real

The Bay Area, while an improvement over the South, was not the Promised Land. Once migrants arrived, they confronted enormous obstacles: residential segregation, employment discrimination, exclusion from labor unions and public accommodations, overcrowded schools, and substandard housing. And by most accounts, race relations deteriorated during the war years. In workplaces and neighborhoods, whites exchanged stories about black sexual assaults on white women, public rudeness, and incompetence and laziness on the job. Others spread rumors that black people were taking over California, pushing whites out of everything from streetcars to jobs. The white press fueled wartime resentment and fear by zealously reporting any crime committed by a black person and printing inflammatory editorials about the dangerous influx of "socially-liberated and uninhibited Negroes."

Since most migrants thought they were leaving a repressive environment for a more open one, it was extremely painful to learn that many whites viewed their attempts to exercise basic freedoms as evidence of their "uninhibited" natures, and failure to assimilate into their new environment. Equally painful was the fact that many black old-timers, alarmed over the wartime increase in racial hostility, accepted white stereotypes of the newcomers and attempted to distinguish themselves from those deemed unassimilable.

Social Impact of the War

World War II, however, had substantially changed the terms and dynamics of the national discourse on race. The Roosevelt administration had defined the war as a crusade against Fascist racism, and equality for all became a patriotic principle. In such an environment, there were new opportunities for political and social activism on behalf of civil rights, and at least some old-time black residents welcomed the assertiveness and numerical strength that migrants added to existing black institutions like the NAACP, churches, and National Council of Negro Women. Indeed, the postwar activism of migrants, including their willingness to join forces with white liberals and labor, would ultimately produce concrete gains in the civil rights arena, and permanently transform the Bay Area's political power structure.

Gretchen Lemke-Santangelo teaches history at Saint Mary's College and is the author of books and articles on related topics. Her recent book, Abiding Courage, African American Migrant Women and the East Bay Community, has been award the 1997 Wesley-Logan Prize in African American History from the American Historical Association. She has also authored the following articles, "Deindustrialization, Urban Poverty, and Community Mobilization in Oakland, California, 1945-1995," and "Critical Perspectives on Working People of California: Future Directions for Labor Historians."

Charles Wollenberg is a history instructor at Peralta Colleges, the Social Sciences Chair at Vista College, and occasional history instructor at University of California Extension. He has published the book Marinship at War: Shipbuilding and Social Change in Wartime Sausalito. The central theme of this book is the effect of the Sausalito shipyards on the development of the adjacent community, Marin City, a severely economically depressed and largely African American community.