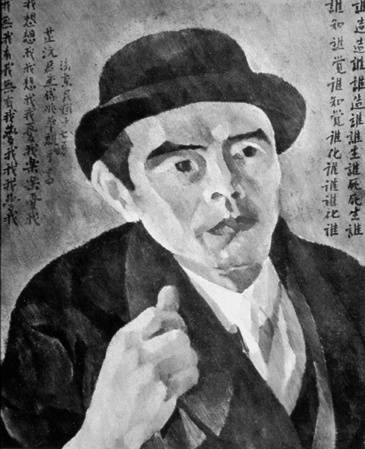 Chinese Man in Hat by Yun Gee shows the mix of styles that Gee employed.

With Gee's extant paintings, we might be able to glimpse something of the uncomfortable or at least unstable vision of a radical Asian-American cultural sensibility. On the one hand, the new Chinatown inspires fascination and self-sufficiency; on the other, self-consciousness and loss. At one end of town, the streets insist on Chinatown's own fullness and offer the possibility of delight; at the other, they require a sense of the quarter's isolation and distance. At Chinatown's heart, the brilliant corners and elegant lamps do not require any singular bodily awareness on the part of the stroller but promise a collective fantasy of plenitude; at the edge, the fantasy disappears, and a simple comparison with the space beyond quickly demands an imaginative surrogate. There does not seem to be a resolution between the two, nor, worse, an alternative.

The closest Gee came to placing the two attitudes together in one painting occurred in a small oil on paper board, entitled Chinese Man in Hat (fig. 6). The painting may very well be a portrait of a Club member, since the painters' subjects tended to be so insular. Running halfway down either side of the central figure is Chinese script. On the left, a repetition of characters suggests a series of claims for some unknown "I": "to have," "not to have," "to have," "not to have." The object of possession is spelled out in the shortest line: "the republic." On the right, another set of characters proposes a series of actions for some unknown "who": "to be born," "to feel," "to know," "to create," "to transform," "to die." The words are repeated over and again, as if they are the product of some hallucinatory dream state and as if they condense a man's life into a succinct sequence, repeated without break. The two halves of the painting are like a divided self, the one half a directed and possessive "I," the other half a resigned and disembodied "who." The central figure points to himself, as if to lay claim to the dissonant set of characterizations and their contradiction. 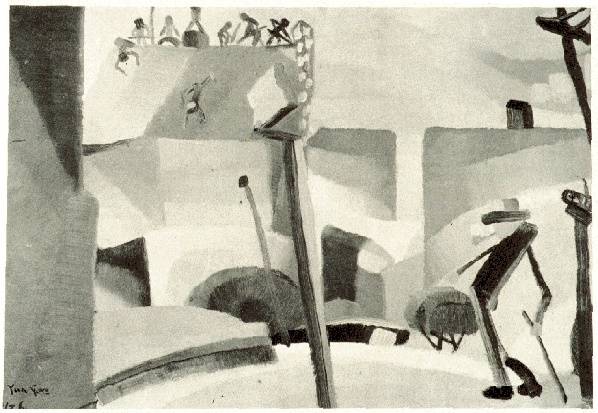 San Francisco Street Scene with Construction Workers (fig. 4), is a familiar one to San Francisco Chinese, then and now, since it is the Stockton Street tunnel that separates Downtown San Francisco from Chinatown proper. We see the cavernous mouth of the tunnel at the bottom-center, just beyond the crest of the hill that is the intersection of Stockton and Sacramento streets. It is a significant location insofar as we are positioned at the southwestern edge of Chinatown, the boundary of the policed quarter beyond which, through the tunnel, another, entirely non-Chinese San Francisco begins. Gee places us on the inside of the gilded ghetto, looking out, watching the city take shape over the tunnel on California Street and observing its activity from a distance. The workers themselves are held on an impossibly precipitous slope, as if they are tacked onto the picture's surface and absorbed into its fiction, as if they constitute a tableau beyond the quarter itself. A street sign to the far right, barely legible as "California]," is the name for the street above, not the intersection below, and thus holds particular, metonymical value. It is a link to the burgeoning space beyond Chinatown's closed borders, towards the precipitous space at the upper half. A stroller (a flâneur), convulsive in his step, makes his way past the sign, southward to the tunnel and an imaginary freedom--or at least one denied to the bulk of young San Francisco Chinese. He sports a pipe and quite probably is a stand-in for the painter himself, who regularly pictured himself with pipe-in-mouth (fig. 5). But it is a stroll that the young Gee was only allowed to make infrequently, and the pathos of the image is in the carefully measured step of the surrogate, who crosses the boundary which the painter himself could rarely do. The whole scenario of flânerie must take place in the fantasy of the painting.

Compared to the general pictorial strategies in San Francisco Chinatown, the Construction Workers is decidedly different. It does not imagine the visual delight of the streets to be similar to the careful construction of the painting. It is, instead, quite awkward--quite an amateurish performance--with the facets and edges unable to smooth over the disjunctions of place and unable to handle the strolling figure in anything but facile terms. I will place a particular stress on the differences between these two paintings and the near breakdown of the latter, for it points to the instability of the nationalist vision based partially on a fabricated, contained tourist culture. San Francisco Chinatown is a view inward and, to the painter, was best understood as a self-sufficient image with a disembodied aspect. Its composition aims for a certain internal consistency, with a careful symmetry of vertical and horizontal elements and a rhythm of overhead triangles, as if that kind of consistency came from the place itself. Chinatown's touristic world was a carefully arranged image that readily gave itself over to painting. At the quarter's edge, however, the spectacular self-sufficiency broke down. Construction Workers is a view outward and, with that as a subject, seemed to suggest the pull of the tunnel, the distant vista, and the hint of a complex urban space beyond Chinatown's edge. But the painting does not seem to manage that combination comfortably and is interrupted by the desires of Gee himself. At Chinatown's borders, he was most aware of his physical presence to the city outside--most aware of his difference in racist San Francisco--and required that he encode that knowledge into the painting's logic.