by the September Women's Action Committee 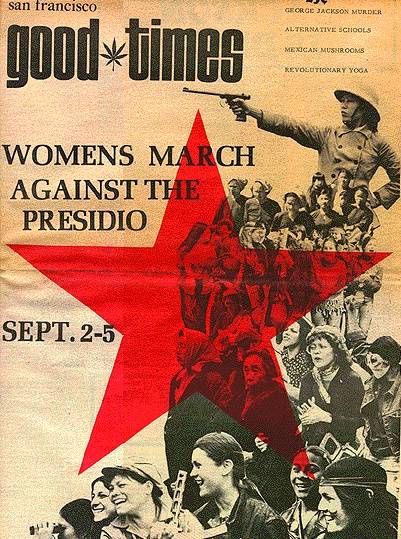 Poster from the the Good Times Collective for a woman's anti-war march on the Presidio, 1971.

On Saturday, September 4, 1971, some 1,500 women -- smiling, laughing, yelling, chanting, painted, angry, beautiful, happy -- marched against the Presidio -- headquarters of the 6th Army and construction site of the Western Medical Institute of Research. 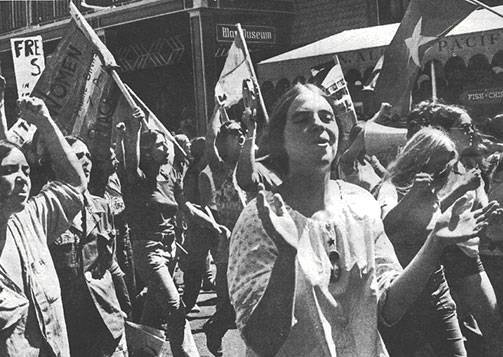 After some chanting, we began our rally. The energy and spirit was overwhelming. Our statement about the purpose of the march was often interrupted by applause and chants. Then Le Anh Tu, a Vietnamese sister, spoke. She spoke mostly about the parallels between the Vietnamese struggle for liberation and our struggle as women: how we both understand that a true revolutionary struggle is born out of love (for our sisters) and hatred (for the oppressor).

Our militance was frustrating for some sisters. We shouted "Tear down the Presidio" only to helplessly confront open gates at the Army base. Many sisters felt our chants should have taken new forms, expressive of the women's movement and what is possible...

We accomplished a lot. We brought broad public attention to the issues of germ warfare, ethnic weapons and the PRG's 7-point peace proposal. We made it clear that there were hundreds of women who stood on the side of the Vietnamese people... We showed that we could be brave without being macho. It was a heavy thing to march in defiance of the cops that week in San Francisco. After all, only a week before, three guards were killed at San Quentin when [inmate] George Jackson was killed. In retaliation another cop was offed; there were three major bombings and several bank burnings.

The unity among the women at the march was beautiful, the energy electric. We went home with new energy, experience and ideas. Four days of activity gave us time to combine politics and culture and work out in practice some of the contradictions that have developed in the women's movement. Mutual baiting between so-called "feminists" and "anti-imperialists" receded into the background.

Our mistakes reflected a lot about the experience of the women's movement. Sisters everywhere have righteously criticized and rejected sexist, manipulative, domineering leadership. We were very self-conscious about avoiding the traditional pitfalls of leadership. In that avoidance, however, we made the opposite mistake. Because we didn't want to be domineering or elitist, we sometimes failed to take leadership responsibility at all. In working on the women's action we began to get some hint of what a new kind of leadership might be, but we still have a way to go.