Women Swimming in the Golden Gate

Excerpted from the book Club Rowing on San Francisco Bay, 1869-1939, by Bill Pickelhaupt. 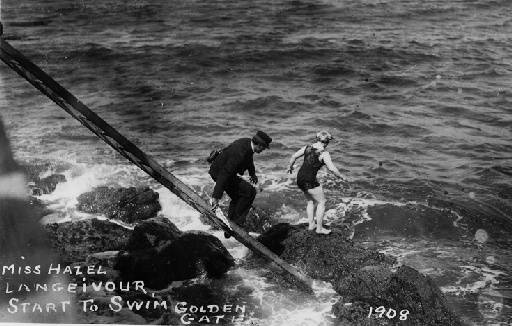 Hazel Lagenour gets ready to enter at Ft. Point, 1911 (not 1908 as the picture is inscribed; her last name's spelling is also apparently incorrect).

Swimming the Golden Gate was an amazing athletic feat at the turn of the century. The first recorded successful attempt was made by Arthur Cavill in 1896. His brother followed in 1907. In 1911 George Bond and Walter Pomeroy, two joint Olympic Club/South End Rowing Club members, broke the old mark set by Cavill.

On August 20, 1911, the South End Rowing Club sent eight pilot boats to assist with the attempt of four young women and several men to swim the Golden Gate. Swimming the Gate was still regarded as a daunting challenge then.

Nita Sheffield and her sister Lyba, of Santa Monica, along with Nellie Schmidt of Alameda and Terie Desch were met by a crowd of 5,000 well wishers at Fort Point and the Marin County Headlands. As the first woman, Nellie Schmidt, entered the water the crowd roared its approval, as horns and air whistles of more than 100 water craft joined in salute.

Nellie Schmidt took a course straight for the Marin shore and "did not vary more than 100 feet from her course during the entire swim." She finished in 42 minutes, a fast time. The two women from Southern California had never seen the Gate before, however, the younger sister, Lyba, finished in 43 minutes and her 18-year-old sister had a time of 46 minutes. Cheers "swept over the bay like great waves" as the women touched the Marin shore. Terie Desch had led for the first 150 yards but had to give up the race 100 yards from her goal. None of the men who braved the waters of the Gate were successful that day. 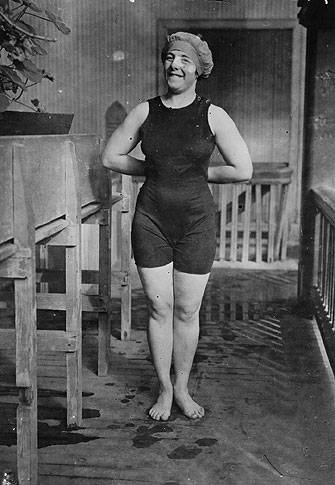 The first woman to swim the Gate, however, was Hazel Lagenour. She had agreed with the four women to attempt the swim on August 20, 1911. But like the Tera Hardin of her day, Hazel and her father decided she should be the very first women to accomplish the feat, even if she was not the fastest for all time. The South End provided the pilots and, as Hazel's mother shouted encouragement from an observation craft, she succeeded in her attempt the day before the other women made their try, on August 19, 1911.

Newspapers around the world trumpeted her triumph. Hazel parlayed her fame into a successful vaudeville act incorporating her swimming skills. She traveled around the country and was banned in Boston when the censors ruled Hazel did the tango underwater as part of her performance. After her career, Hazel returned to the Bay Area, married and had children.

Hazel Lagenour was not the first woman to attempt the swim, however. That honor goes to Terie Desch, who six days earlier, on August 13, 1911, plunged into the cold water of the Bay. Desch did not understand Captain Clark's signal to get ready and instead jumped into the Bay off Fort Point prematurely, along with her escort of four male swimmers. A strong ebb tided carried them seaward. After struggling for 37 minutes Terie was pulled from the water. As noted above, her attempt a week later also met with failure. 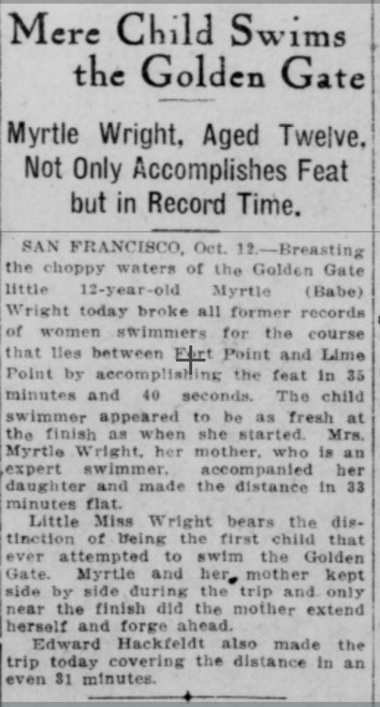 On October 12, 1913 Dolly Meyer and Myrtle Wright (age 12) ventured the Golden Gate crossing and both succeeded in their goal, the former with a time of one hour 28 minutes, the later a much quicker 35 minutes, 40 seconds. Members of the California Life Saving and Swimming Club, they were started by Captain Clark, who set them off at 11 a.m. on their course from Fort Point to Lime Point.

On October 22, 1916, 12 women began the swim from Fort Point to Lime Point but only eight reached their goal. The winner, Ms. Wally Mann, benefited from the piloting of veteran Dolphin oarsmen W. L. Bush and Charles Farrell. Ms. Mann's time was a little over a minute slower than the record at the time of Babe Wright.

The women's Gate swim on June 9, 1917, sponsored by the Dolphin Club, was marked by controversy. The apparent winner, Marguerite Smith, was stopped short of the "imaginary" finish line by her pilot, Sid Cavill, and the cheers of the crowd and sirens of the boats at the scene. The real finish line, marked by flags, sat 30 yards further back. Frances Cowells, piloted by Alec Pape, reached that line in a time of 41 minutes 15 seconds.

October 9, 1917 Catherine Flaherty, a 17 year old swimming for the Center Club, established a new record for the women's Gate swim. Swimming with a double overarm pull, Ms. Flaherty was started from Fort Point by the ubiquitous Captain Clark. 29 minutes and 30 seconds later she reached Lime Point, escorted by her pilot, Alec Pape.

The women's Gate swims continued to increase in popularity and by July 1918, 19 women started but only eight finished the swim. The winner, Frances Cowells, was more than a half hour slower than her own time in 1917. 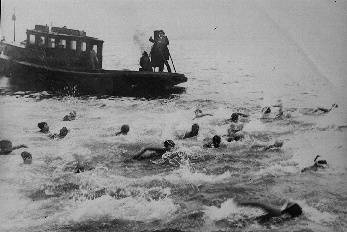 On September 10, 1921 Marie Curtis, of the Los Angeles Athletic Club, dove from a rowboat 40 yards off Fort Point and 27 minutes 14 seconds later pulled herself onto the rocks at Lime Point. Known as America' s Prettiest Mermaid, Ms. Curtis "was as fresh at the finish as when she started."

On December 2, 1928 the South End Rowing Club sponsored a Golden Gate swim for women only. Won by Evelyn Mefford, a 1928 graduate of Presentation High School, her time from Lime Point in Marin County to Fort Point was 36 minutes, 8 seconds. She qualified for the 1928 Olympics but her overly protective mother would not allow her to participate. At the age of 19 Evie, as her friends knew her, retired, with 278 first place medals and trophies. 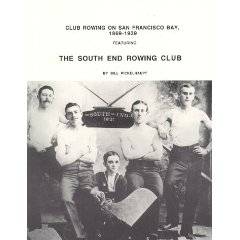