Willis Jefferson Polk was born in Jacksonville, Illinois on October 3, 1867, the eldest of five children. His father, Willis Webb Polk (1836-1906), was also an architect. At the age of 14 Polk became an architect's apprentice and in 1882 he won a competition for the design of a six-room schoolhouse in Hope, Arkansas, where his family then lived. In 1885 the partnership of W. W. Polk & Sons, including Daniel Polk, Willis' brother, was established in Kansas City. Between 1887 and 1889 Willis traveled extensively and acquired experience working for many architects including Ernest Coxhead and A. Page Brown. Brown encouraged Willis to follow him out to San Francisco. Polk's family also then moved here and the new firm of Polk & Polk was opened in 1892 with young Willis providing the creativity, his brother Daniel doing the drafting, and his father supervising construction projects.

Polk's earliest residential design work in the City was on Russian Hill and is well documented in Richard Longstreth's On the Edge of the World and Bill Kostura's Russian Hill - the Summit 1853-1906. He remodeled the Horatio Livermore home at 1045 Vallejo in 1891, and in 1892 he designed two multi-level houses at 1013-19 Vallejo for his family and a client, waiving his fee for the eastern portion of the lot. The structure he designed for himself was recently listed for sale for $4,000,000. Some of his other early residential commissions were in Presidio Heights at 116 Cherry (in 1891) and 3203 Pacific (an extensive remodel in 1892). A little while later, in Pacific Heights he designed 2015 Pacific (in 1894), 2622 Jackson (also in 1894, for George W. Gibbs, San Francisco Landmark #203), and 2550 Webster (in 1896, for William B. Bourn, San Francisco Landmark #38). 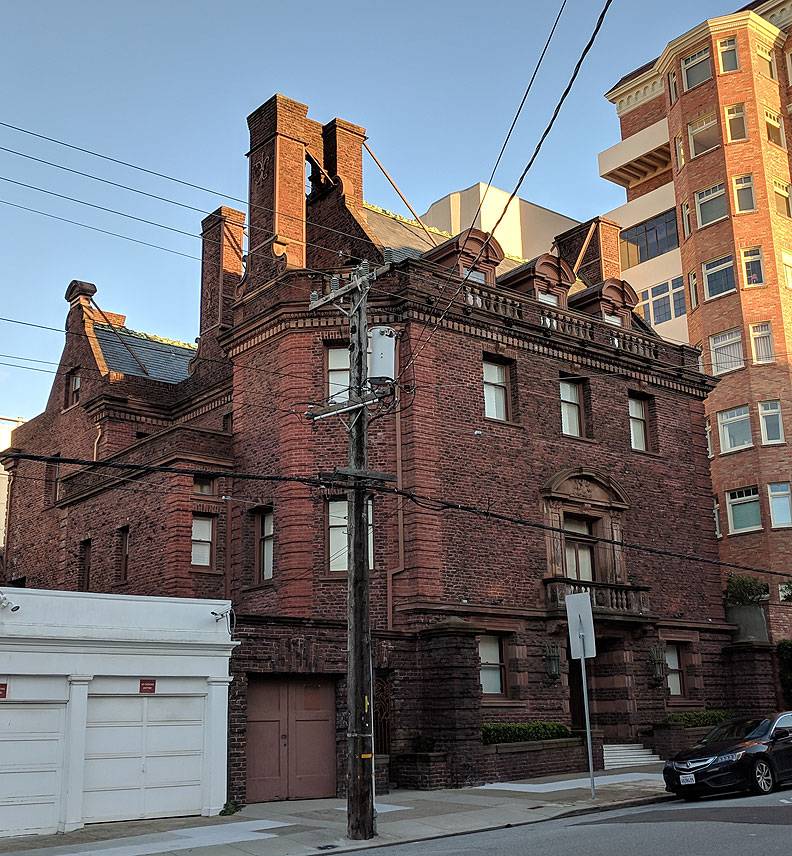 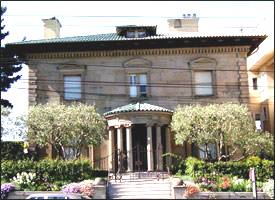 The Gibbs Mansion at 2622 Jackson, pictured here, is in the Italian Renaissance style and was declared at the time by the Examiner to be 'the first classical residence in San Francisco'. The round entrance portico is reminiscent of a Tuscan villa. The exterior is gray Oregon sandstone and the home features a Gladding McBean glazed tile roof. Sadly, George Gibbs died only two months after moving into it, but his widow Augusta continued to occupy it until her death in 1918. It later became the Japanese Consulate until the outbreak of World War II. It then served as headquarters for the local chapter of the Red Cross until the late 1940's when it was purchased by the San Francisco Music and Arts Institute. It was sold in 1993 to designer Agnes Bourne, who supervised the renovation of it and made it available to University High School as their 1994 Decorator Showcase house. In May 1995 it was bought by the present owner, a pre-eminent writer/movie director. Hidden behind the house to the northwest, closer to Pacific than to Jackson, is a little-known two-story structure originally built as a caretaker's residence for the main house. Now subdivided from the original parcel and separately owned, it was also designed by Polk & Polk, and is included in the Landmark case report as an unusual support structure for such a house in the area.

Polk's father retired from the firm in 1896 and Daniel Polk had already departed to play banjo in vaudeville, which left Willis Polk struggling to survive in business. He was forced to declare bankruptcy in 1897, which hurt his reputation and his ego. He worked out of the Vallejo family house until late in 1899 when he joined architect George W. Percy after Percy's partner F. F. Hamilton died.

In 1900 Polk married Christine Barreda, moving into her family's home in Pacific Heights at what is now 2141 Buchanan. In 1901 they relocated to Chicago so Polk could work for famed architect Daniel Burnham. Burnham had laid out the 1893 World's Columbian Exposition in Chicago, which sparked the American Renaissance of arts and architecture, and had already designed two important San Francisco buildings - 690 Market (in 1889) and 220 Montgomery (in 1891). While in Chicago, in 1903, Polk designed 465 California for the firm. After a three-month trip to Europe, Polk returned to San Francisco in the fall of 1903, beginning a partnership with George A. Wright which lasted until 1906, being dissolved just prior to the April earthquake.

Burnham had become a leader of the nationwide City Beautiful movement and was asked in 1904 to produce a San Francisco Plan. His associate, Edward H. Bennett, led the project, with Polk assisting, and the plan was completed in 1905. The 1906 earthquake and fire killed its chances of being implemented, but Polk convinced Burnham to reopen a San Francisco office which Polk then ran for four years before they parted ways again in July 1910.

Among the many D. H. Burnham & Co. commissions after the earthquake was a remodel of the gutted shell of the Flood mansion at 1000 California into the Pacific Union Club. It was arranged by William B. Bourn, President of the Spring Valley Water Company and owner of Grass Valley's Empire Mine. Bourn was a patron of Polk's for whom Polk designed many projects, including the aforementioned 2550 Webster and also Bourn's country estate Filoli on Cañada Road in Woodside. Much later Filoli was made famous as the Carrington house in the television series Dynasty.

In addition to his residential work, Polk played a leading role in the planning of the 1915 Panama-Pacific International Exposition as the initial supervising architect, generously giving the design of the Palace of Fine Arts, which had been assigned to his office, to Bernard Maybeck after being impressed by Maybeck's initial sketches. The Palace of Fine Arts, rebuilt in 1962, is the only significant structure that survived in place after the Exposition ended.

Polk was an untiring advocate for civic improvements. A volatile personality, he could sometimes be difficult to get along with, but his talent was never in dispute. During the construction of the Hobart Building at 582 Market (1914, San Francisco Landmark #162) he mounted a protest while perched on a steel girder ten stories up after a City building inspector tried to have the work stopped. Polk had decided that lath and plaster fireproofing of the structural steel in the building was better than the concrete soffit called for by the building code of the day. Polk won his case, but not before taking on and antagonizing the City Hall hierarchy all the way up to Mayor Rolph.

Polk's Hallidie Building at 130 Sutter (1917, San Francisco Landmark #37) is recognized world-wide as one of the first glass curtain-wall structures. This retail and office building was the last one built on the block and is not only innovative, but does a wonderful job of tying a group of individual Downtown structures into a cohesive whole. It was built for the Regents of the University of California and named after Andrew Hallidie, inventor of the cable car. Fittingly, one of the office floors is home today to the local chapter of the American Institute of Architects. 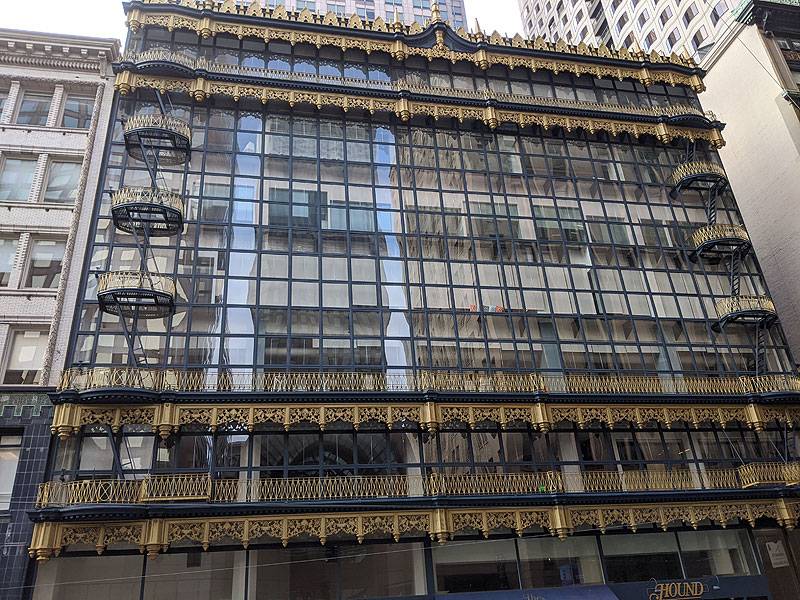 After Polk died, on September 10, 1924, his stepson Austin P. Moore (Christine Barreda's son by her first husband Charles A. Moore) came in to run the business affairs of Willis Polk & Co. With the talented architects trained by Polk, including James Mitchell and Angus McSweeney, the company completed many projects including 2800 & 2808 Broadway, 2100 Washington, the 1090 Chestnut co-operative apartments (all in 1927), and the St. Francis Yacht Club (in 1928). After Mitchell left in 1929, the company name and the Polk legacy were continued well into the 1930's by McSweeney.

For his later career, the scrapbook kept by Polk, which can be viewed at the California Historical Society, contains many fascinating insights into his work and personality.

Entry taken from the website of David Parry at Classic SF Properties and is used by permission. Unauthorized use of this copyrighted material is strictly forbidden without permission from the author.