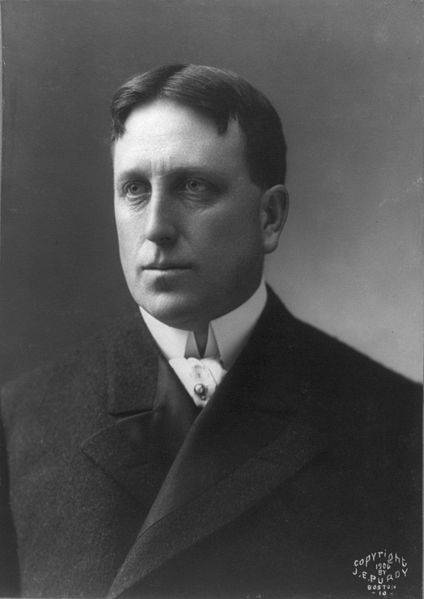 Photo: Library of Congress via Wikipedia

William Randolph Hearst was an incredibly fortunate young man. He was the only son of Senator George Hearst, who owned some very nice mining properties, such as Anaconda and Homestead, and his mom Phoebe Apperson Hearst, really one of the great and most remarkable women of California. I often wondered how she could have produced such a monster as her son. Anyway, William Randolph acquired the SF Examiner, which his father had acquired in getting to the Senate in the 1880s, and of course, launched him on his career. How is he going to increase circulation? He's going to attack the SP monopoly. And he does and does so very effectively. Southern Pacific Railroad probably never would have been broken, and certainly not when it was, if it hadn't been for William Randolph Hearst and the enormous fortune behind him, which allowed him to attack the Southern Pacific. Hearst was a marvelous demagogue and he launched the legend of the evil of the railroad. In fact, actually, the story is now starting to leak out, that it is a little more complicated than that. The Senator dies in 1891. He leaves a very peculiar will--he leaves everything to his wife. And apparently his deathbed whisper to her, "take care of Will, he's not good with money."

So for years, William Randolph Hearst is dependent on his mother for an allowance to keep him going. But he's very persuasive. In 1895 he persuades her to sell one of their properties, Anaconda Copper, which they have a controlling interest in, to the Rothschilds for $7.5 million, and with that he acquires his first New York paper, the New York Journal. William Randolph Hearst had an infallible instinct for the adolescent maturity level of the American people. He was a perennial adolescent himself, so he really keyed in to the American need for fairy tales and sex and violence, and he'd give it to them. With that he becomes enormously powerful and wealthy. Wealth was very important to him, but it was really a means to power, which is what he really wanted. He wanted desperately to become President of the U.S. and almost got there, except in his early years he was such a maverick, such a loose cannon, that the national oligarchy made sure that he didn't get to the White House. They stymied him. In his early years he was quite progressive, which helped him to power. It was only later on that he became a proto-fascist, after Franklin Roosevelt instituted a strong, progressive income tax. What's really interesting... where's his money coming from? It's coming from mining and ranching, huge landholdings in Mexico for example, and throughout the rest of the U.S. Big time downtown Manhattan real estate. He was second on landholdings only to the Rockefellers in Manhattan real estate. But also it's a hemispheric empire. The Hearsts on the west coast are the only family who can challenge the trusts, the Rockefellers, that kind of wealth. So they have the Cero Taxco mines in Peru, which is what you're looking at, and this is very interesting because at the time, the Hearst papers are attacking the trusts, JP Morgan for example, with whom he is an active partner in the syndicate which runs Cero Taxco.

--excerpted from a talk by Gray Brechin at New College of California, 1994