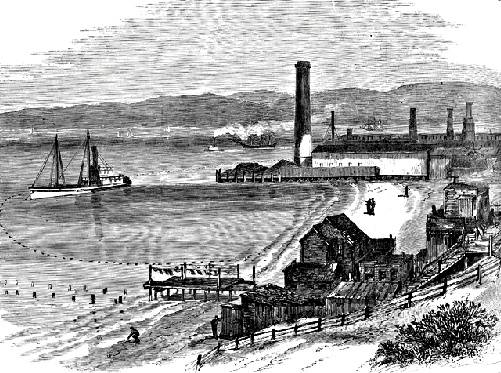 William Ralston, after his Bank of California closed its doors on "Black Friday" in 1875, took his daily swim off the end of Larkin Street in the shadow of the Selby Lead Smelting Works and unexpectedly drowned.
Image: Harper's Weekly

William Chapman Ralston is held to be the most influential catalyst of San Francisco's growth after the Gold Rush of 1849. As a successful banker and investor in San Francisco, Ralston established a monopoly of the gold mine industry from 1864 to his death in 1875. Using his incredible clout, Ralston was able to generate millions of dollars for San Francisco during its heady boom years.

Like fellow San Francisco citizen Mark Twain, William Ralston worked on Mississippi riverboats as a youth. In the late 1850s, he captained a ship that brought "Argonauts" from Central America to work in the newly created gold mines. He stayed in San Francisco and soon became a successful banker.

In 1864, Ralston joined with Darius Ogden Mills to open the Bank of California at the corner of Battery and Washington. Through this entity, Ralston became involved in a number of dicey schemes, some of which proved to be complete shams (e.g. The Great Diamond Hoax of 1871). However, it was the silver-producing Comstock Lode that would eventually become the Bank of California's cash cow. Ralston was convinced that there was still plenty of silver ore to be extracted from Sun Mountain, even though many thought it had already played out after the initial Silver Rush of 1859. The same year Ralston opened the Bank of California, he commissioned William Sharon, a failed real-estate broker, to oversee the bank's interests in Nevada. The Bank of California offered loans to the failing mining companies at a competitive 2% interest rate. Since the average interest rate then was in the range 3% to 5%, the companies flocked to Ralston, seeking loans to continue their operations. Then, when most of the mines were unable to repay the debt, Ralston took control of the mines, either by foreclosing on them or accepting majority stock as payment. In addition, Ralston bought the silver mills of Virginia City, where all of the mining companies sent their silver ore to be refined. Thereby Ralston insured that even those mines that had not sold their interests to him were subject to his influence. Ralston had effectively established a monopoly on the Comstock Lode.

Once he had control, Ralston poured money into new machinery to extract silver ore from Sun Mountain. Whereas earlier mining companies had run into problems trying to prick the buried veins of silver, Ralston hired new engineers to deal with typical mining problems like drainage, ventilation and removal of the precious ore. Soon some of the mines had gone bonanza again and mining stocks were again being bought and sold like crazy at Ralston's own Mining Exchange across the street.

Thus began the rapid development of San Francisco's financial district. William Ralston was now in a position to generate incredible amounts of revenue from investors on the east coast, while continuously strengthening his stranglehold on the Comstock Lode by purchasing mines, mills, lumber companies and stage lines. The money garnered from speculation was far more crucial to the growth of San Francisco than from the actual mining of precious metals. The excitement over the potential output from Sun Mountain led to a speculation frenzy that put San Francisco on the map in a short amount of time. From 1865-1875, more money was wrapped up in Comstock speculation than existed on the entire Pacific Coast in real dollars.

Needless to say, Ralston was living large. He invested in opera houses and theaters in San Francisco, in addition to building a gargantuan eighty-room mansion in Belmont, which lies south of San Francisco. Ralston bought up fur companies, furniture factories, sugar refineries, railways and watch companies. He gained controlling interest of the Spring Valley Water Company -- San Francisco's major water supplier at that time. Ralston also poured money into the formation of the nascent Golden Gate Park, which, at that time, was merely a bunch of sand dunes.

In 1870, Ralston commissioned the construction of the most ostentatious monument to his wealth, the Palace Hotel, which was $7 million in the making and sat on two-and-a-half acres. When it opened, the Palace Hotel was the largest hotel in the country and it boasted a bar tended by 30 men. For its construction, Ralston had linen, marble, wood and china from all over the world. It was equipped with state-of-the-art water and safety systems, and had a seven-story atrium for guests to drive their carriages into. The Palace would eventually host such prestigious visitors as Ulysses Grant, Rudyard Kipling and Emperor Dom Pedro III of Brazil. But one person who did not get to enjoy the opulence of the Palace hotel was Ralston himself, who fell victim to a stroke while swimming off North Beach and drowned, only two months before its opening in October of 1875. The refurbished post-earthquake Palace that was built after 1906 is now the property of Sheraton and stands today at the corner of New Montgomery and Market Street.

In spite of his apparent taste for grandeur, Ralston was reputedly a modest man. It was once proposed during a banquet that an agricultural community to the south of San Francisco be named after Ralston. Ralston respectfully declined the honor, not wishing to be lionized in this manner. The next speaker quipped that the town be named after Ralston's modesty. Thus, the town of Modesto was born and a good laugh was had by all.

Although Ralston moved a lot of cash in his lifetime, he actually died severely in debt, observing a fine tradition of rags-to-riches-to-rags entreprenuers in the history of San Francisco. At the time of his death, it was rumored that Ralston had actually committed suicide to escape from his accruing debt. However, his successors managed to keep the largest monument to his wealth -- the Palace Hotel -- up and running until it burned down in the fire of 1906.