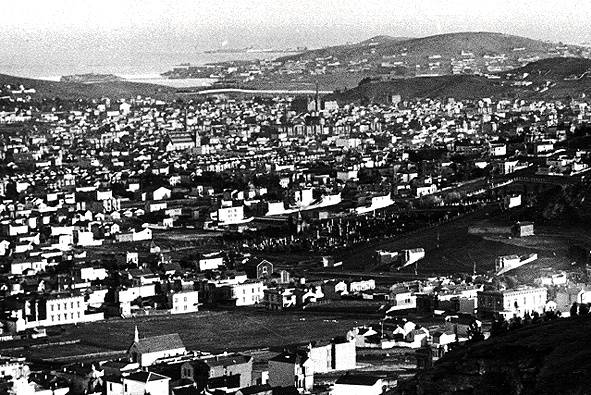 Looking southeast in 1886 from Buena Vista Hill. At the time of this photo, today's Dolores Park (center) was a Jewish cemetery. Bernal Heights is the dark ridge jutting in from the upper right. 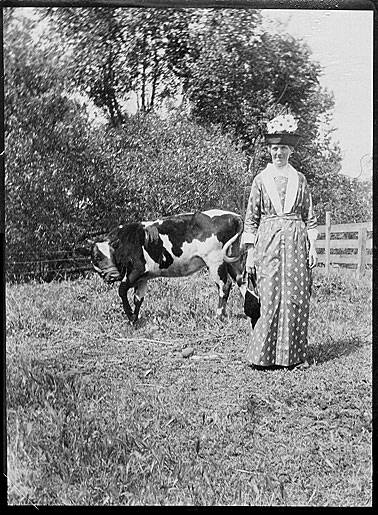 Sue McMahon is shown at the top of Prentiss Street with Mrs. Driscoll's cow in 1913. Several photos of Bernal show the fenced yards of dairy farms around isolated houses.

During the 19th century, Irish settlers around Bernal Heights grazed livestock on the hill's pastures. They were plagued by the city poundmen, the 19th century equivalent of meter maids, who made their money collecting fees for the sale or return of impounded animals. When the settlers' animals disappeared, they knew who to blame. For decades they tolerated this officially-sanctioned robbery, like contemporary San Franciscans who uncomplainingly pay street sweeping tickets.

One day, however, the Widow O'Brien's cow disappeared. The hardworking widow, who had singlehandedly raised two daughters, was the most respected resident of the Heights. What happened next is described in Hills of San Francisco (p.62): "Every man, boy, and dog on the hill assembled and roughed up the poundmen and drove them off the heights. The interlopers never returned."