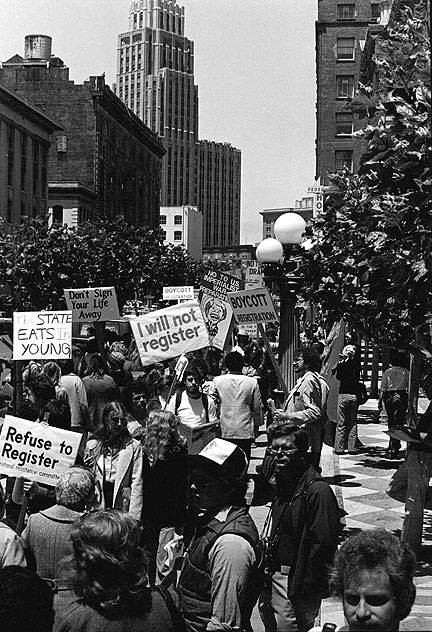 Anti-draft registration demonstration passing the main Post Office and draft registration site (today the 9th Circuit Court of Appeals courthouse) on 7th Street at Mission, March 22, 1980. Marches and rallies in Washington, DC, and San Francisco, CA against draft registration on the same day brought together several tens of thousands of people on each coast. 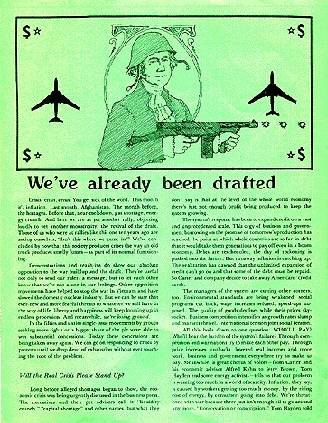 Crisis, crisis, crisis. You get sick of the word. This month it's inflation. Last month, Afghanistan. The month before, the hostages. Before that, near-meltdown, gas shortage, energy crunch. And here we are at yet another rally, objecting loudly to yet another monstrosity, the revival of the draft. Those of us who were at rallies like this one ten years ago are asking ourselves, "Isn't this where we came in?" We've concluded by now that this society produces crises the way an old truck produces smelly fumes -- as part of its normal functioning.

Demonstrations and teach-ins do show our absolute opposition to the war· buildup and the draft. They're useful not only to send our rulers a message, but to let each other know that we're not alone in our feelings. Other opposition movements have helped to stop the war in Vietnam and have slowed the domestic nuclear industry. But we can be sure that ever-new and more fearful threats to whatever we still have in the way of life, liberty and happiness will keep looming up in endless procession. And meanwhile, we're losing ground.

In the fifties and sixties single-issue movements by groups seeking more rights or a bigger share of the pie were able to win substantial concessions. Today these concessions are being taken away again. We can go on responding to crises by protests until we drop dead of exhaustion without ever touching the root of the problem.

Will the Real Crisis Please Stand Up?

Long before alleged shortages began to show, the economic crisis was being urgently discussed in the business press. The executives and their pet advisors call it "liquidity crunch," "capital shortage" and other names, but what they don't say is that at the level of the whole world economy there's just not enough profit being produced to keep the system growing.

The system's response has been to expand credit on a vast and unprecedented scale. This orgy of business and government borrowing on the promise of tomorrow's production has reached the point at which whole countries are so far in debt that it would take them generations to pay off even in a boom economy. Debts are rescheduled, the day of reckoning is pushed into the future. But runaway inflation is catching up. The realization has dawned that the unlimited expansion of credit can't go on and that some of the debt must be repaid. So Carter and company decide to take away Americans' credit cards.

The managers of the system are cutting other corners, too. Environmental standards are being weakened, social programs cut back, wage increases refused, speed-ups imposed. The quality of goods declines while their prices skyrocket. Business competition intensifies as growth rates slump and markets shrivel. International tension joins social tension.

All this boils down to one question: WHO'LL PAY? Who'll bear the burden of the system's failure? Through competition and war nations try to make each other pay. Through price increases, cutbacks, lowered real incomes and more work, business and government everywhere try to make us pay. Meanwhile, a great chorus of voices--from Carter and his economic advisor Alfred Kahn to Jerry Brown, Tom Hayden and some energy activists--tells us that our problem is wanting too much in a world of scarcity. Inflation, they say, is caused by workers getting too much money, by the rising cost of energy, by consumers going into debt. We're threatened with war because there just isn't enough oil to go around any more. "Conservation or conscription," Tom Hayden told an anti-war teach-in a few weeks ago.

The draft is only one form of involuntary servitude. Even in "normal" conditions most People have no real control over their lives. Production workers are forced to make shoddy, useless and even destructive goods. Clerical and sales workers use up whole forests worth of paper and billions of kilowatts of electricity just making the money go round. Even engineers and technicians must shape their work to the requirements of the companies and bureaucracies they work for.

You can change jobs, but all jobs get more and more alike. And it's the same bind when you get off work. There are plenty of brands on the shelves at the supermarket, but how real are the choices, especially when your budget is shrinking by twenty percent a year There's no way that individuals can halt the drive toward war or end the energy crisis by consuming less. Much of America's vaunted consumption is enforced waste. Who'd burn thousands of gallons of gas a year commuting if they didn't have to)? Who'd buy cars or washing machines that have to be junked in five years)? Who'd live in badly-built, heat-leaking homes)? Who really wants all that fancy packaging and advertising? And military production, all of it waste from any sane point of view, makes up a huge percentage of the GNP.

So we've already been drafted. Military conscription means that not enough of us have offered ourselves up as cannon fodder. But the rest of us are also part of the machine. We sell it our time and energy and health in exchange for survival. At the same time, we sell away our power to decide what will be produced in society, for whom and how.

We All Work for the Same Boss

One hundred and fifty years of competition have produced an enormously concentrated and centralized national economy in which business and government have to a great extent fused. This fusion will go further as the profit shortage worsens and as international competition grows fiercer still. The national economy tends to function on the world market as a single gigantic corporation, "America, Inc."

Most other countries are already further along this path. Those calling themselves socialist are only its logical conclusion, actual company nations, where government and management have merged. So what does it mean to worry about the Soviet Union imposing "their system" on us? Theirs is not fundamentally different from ours, and the remaining margin of freedom we still hold over Soviet citizens is based as much on our Company's greater competitive strength as on democratic tradition.

It's not that everyone's just putting up with all this. The Company is running into massive opposition as it tries to make us pay for the crisis by imposing more work, less real income and a shorter, dirtier, duller and more dangerous life. Besides the highly-publicized mass demonstrations against nuclear power and the draft, strikes, sickouts, sabotage and absenteeism continue on a large scale. The recent massive increases of shoplifting and employee pilfering are further indicators. Sometimes in individual acts of rebellion, but more and more often as social activity, millions of people are beginning to reject in practice a system based on the myth of equality and the reality of mass dispossession.

These forms of resistance point in the right direction, that of using the economy as a weapon. For the system to work, commodities must not only be produced and distributed, but their value collected at the point of sale, returned to the Company and accounted for. At every point in this process the circuit can be broken by the workers who do the job in question: production workers, drivers, storage workers, sales clerks, word processors or data typists. "Consumers" can play a part by refusing to pay the price demanded for goods and services. No matter where the circuit is broken, the Company is hurt by unrealized profits.

In Italy in 1974 and '75, for instance, thousands of working class people refused to pay increased rates for electricity and gas. Utility workers collaborated by "forgetting" to shut off meters, reading them incorrectly, or helping ratepayers to sabotage them in inconspicuous ways.

Actions of this sort foreshadow a world where the circuit of work and pay is broken for good--a world where people cooperate freely in providing for each others' needs without the compulsion of bosses, commissars, and the wage system itself. This is the only way past the stage of endless reaction to crisis after crisis.

It's time to fight not only the military draft, but the civilian draft that backs it UP and makes it possible. That means breaking another circuit, the circuit of our days and nights, of accepting the current nightmare as the only possible world. It means taking our anger, our dreams and our intelligence more seriously than ever before, refusing "correct leadership" and package deals. We make the new world ourselves, without external authority, or we wind up back in the old one.

No one else is going to do it for us. 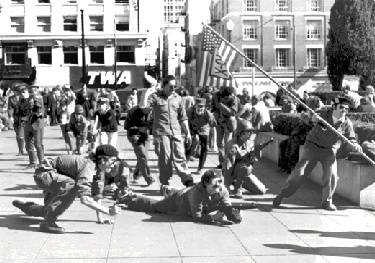 Union of Concerned Commies on Union Square. The above flyer was distributed as the street theater took place.