by Mary Nelson, originally published in The Semaphore #151, Spring 2000. 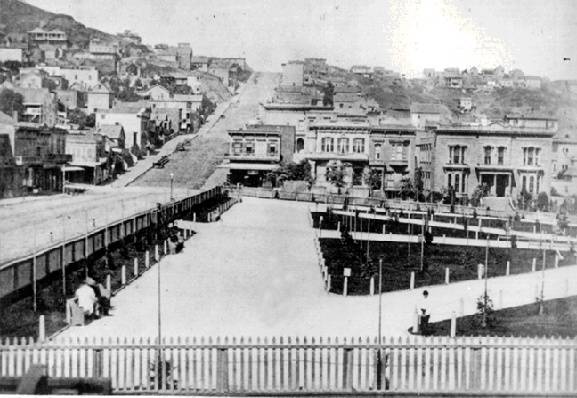 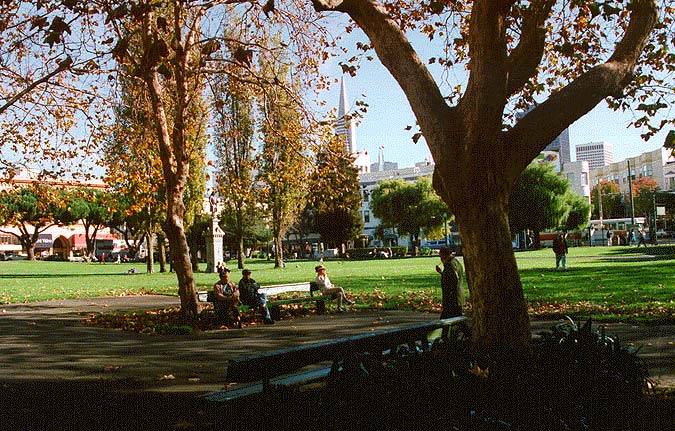 Looking southeast across Washington Square in 1997

The park, the Square, Il Giardino. The Italians called it the The Garden. Washington Square is many things. To some, it is the village green. To some, it’s the front lawn of the Church of Saints Peter and Paul. To others, it is a sanctuary. Step out of the Post Office on Stockton Street, and look up. A massive tower of a tree rivals the spires of the church, in mass and height and nearness to heaven. Consider the ten giant pines on the corner of Filbert Street and Columbus Avenue. Their soft and vaulted canopy is a chapel, protecting the little playground.

Old timers who have been watching over the park say Washington Square has never looked as beautiful as it does today. Tom O’Connor, the City gardener, has been lavishing affection on the grass, the flowerbeds and the soil around the trees.

It’s an auspicious time to be beautiful. This is the year of Washington Square. In its 150th year, the Hill Dwellers are celebrating the heart of North Beach and their achievement in persuading the City of its historical significance and of the need to protect it from destruction.

Washington Square is now a San Francisco landmark. This is thanks to more than two years of the Hill Dwellers’ efforts—lead by Aaron Peskin and the Board of Directors—and the scores of hours of research and photography, meetings, letters and presentations to city officials in numerous departments.

In 1850, the first mayor of San Francisco, John W. Geary, declared the land a public square. It was first cultivated by prisoners, who graded the land and watered the grass. But in the early 1850s, it became a haphazard cemetery and a goat pasture. Then it was an unofficial dump and the workplace of a stonemason. Then it became a traditional, Eastern style, public square, crisscrossed by an unpaved X, carved by people getting across as quickly as possible. It was also the fastest way for those on horseback to get from Union Street to Filbert Street. Riders were eventually discouraged by the building of a ditch on one side, and a low wall on the other.

Originally, it was a complete rectangle, all the way to Powell Street. But in 1873-1875, the City built Columbus Avenue, then known as Montgomery, cutting through the Square. The avenue was built, evidently, because business and banking interests in the Financial District wanted greater interaction with North Beach, which was isolated, geographically, by the hills, the Barbary Coast, and Chinatown.

The tiny park at Powell Street, is now named Marini Plaza. Frank Marini (1862-1952) is mentioned often in Alessandro Baccari’s book, “Saints Peter and Paul: ‘The Italian Cathedral’ of the West, 1884-1984.” Marini was a major civic benefactor, participating in the work of the Salesian groups at the Church of Saints Peter and Paul. He was a sponsor of the boys’ club, to help troubled immigrant boys who had little English speaking ability, education or guidance. He was a fundraiser to pay off the debt for building the church and Salesian school. He gave the money to build a gymnasium at St. Francis Church, on Vallejo Street, for the church-sponsored basketball teams. Washington Square was a place of refuge for many fires on Telegraph Hill, notably in 1894 and 1901. It was home for a year for some 600 people who lived in wooden barracks and Army tents after the 1906 earthquake and fire. 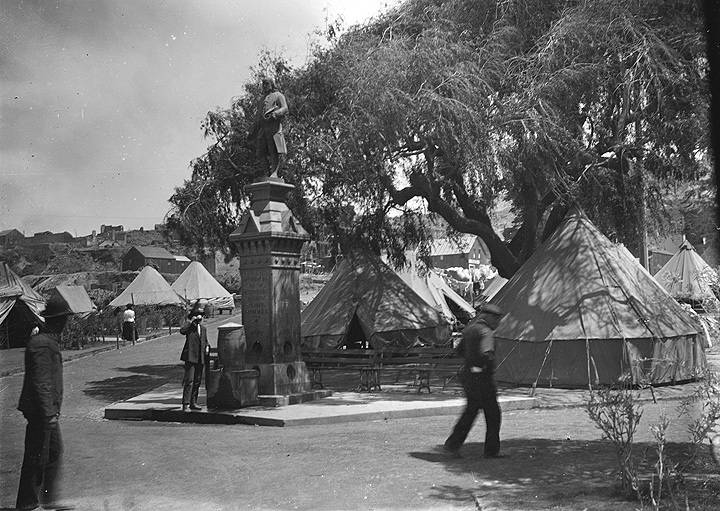 It was also a stage for celebration. In the 1920s, Italian festivals and musicales were held in the Square, as was the annual Columbus Day parade. There, the Salesians celebrated completion of the Church of Saints Peter and Paul, which had been under construction from 1912 to 1924. In 1951, when the City intended to build the North Beach library in the center of Washington Square, Father Costanzo, of Saints Peter and Paul, led the fight to save it as a common green. He believed in preserving the open space, free of buildings, as the center of the neighborhood. 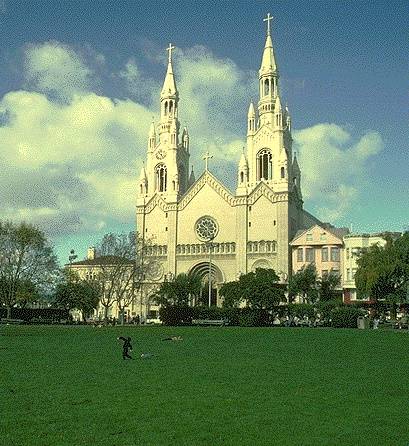 Controversy again arose in the mid-1950s, when a coalition, the Committee to Beautify Washington Square, engaged Lawrence Halprin and Douglas Baylis to redesign the Square. Halprin got rid of the X and designed the paved and curving paths around the periphery of the center lawn, which we have today. After the design was completed in 1958, controversy kicked up again. Proponents of an underground city garage sought to tear up the park to solve the parking problem. The Board of Supervisors narrowly approved the garage that year. But, in a move that some say cost him his political career, Mayor John F. Shelley vetoed the plan, stating that the garage would lose money for the entire 35 years of the life of the bond issued to finance it. Even so, the garage proposal surfaced two years later, and has every several years since then.

Ironically, the City’s landmark case report states that the major threats to Washington Square are public works projects and vandals. Washington Square is one of the three original public squares in San Francisco, dating to 1849, and the only one to escape the bulldozer. Both Union Square and Portsmouth Square are today the roofs of City parking garages. Now that the Square is landmarked, any significant changes to the major features requires a public hearing and a special permit from the Landmarks Preservation Advisory Board. Marini Plaza is landmarked, too. The missing sculpture of the California Bear, in the pose that appears on the State flag, was severely vandalized a few years ago. Ripped off its platform, it lost its paws, and was thrown in the pond. Neighborhood efforts to raise money for restoration were successful. The bear has been recast and will be returned some time this year.

What will remain in Washington Square includes the Juana Briones bench, dedicated to the Mexican cattle rancher, humanitarian and mother of eight (1802-1889), who ranched and farmed what is now the Square in the 1830s. Apart from the merits of memorializing Briones, the bench was hugely controversial as to size and location when it was installed in 1997.

In the center of the Square, surrounded by six Lombardy poplars, is the statue of Benjamin Franklin, which was given to the City in 1879 by Dr. Henry Cogswell, a tee-totaling dentist who intended to donate a public water drinking fountain for every hundred bars, a project which proved impossible. It is no longer a water fountain, but the base reads “Welcome” on all four sides and is dedicated, “To Our Boys and Girls, Who Will Soon Take Our Places and Pass On.” The statue was moved to the Square from Kearny Street in 1904. It has a time capsule, which was opened in 1979, and will be again in 2079.

The monument to the Volunteer Firemen of San Francisco, 1849 to 1866, was funded by a bequest from Lilly Hitchcock Coit and originally meant for Coit Tower, but was dedicated in Washington Square in 1933. The geodetic survey marker, dating from 1869, was placed there by Dr. George Davidson, for whom Mount Davison was named. In 1937, the latitude and longitude of Washington Square were carved onto the monument. For those who love it, Washington Square is a landmark of the mind. And today, it’s a landmark indeed. The effect is not absolute protection. But like a heavy mist calming the dust of controversy, it gives notice that the park, the Square, Il Giardino, is a sanctuary. 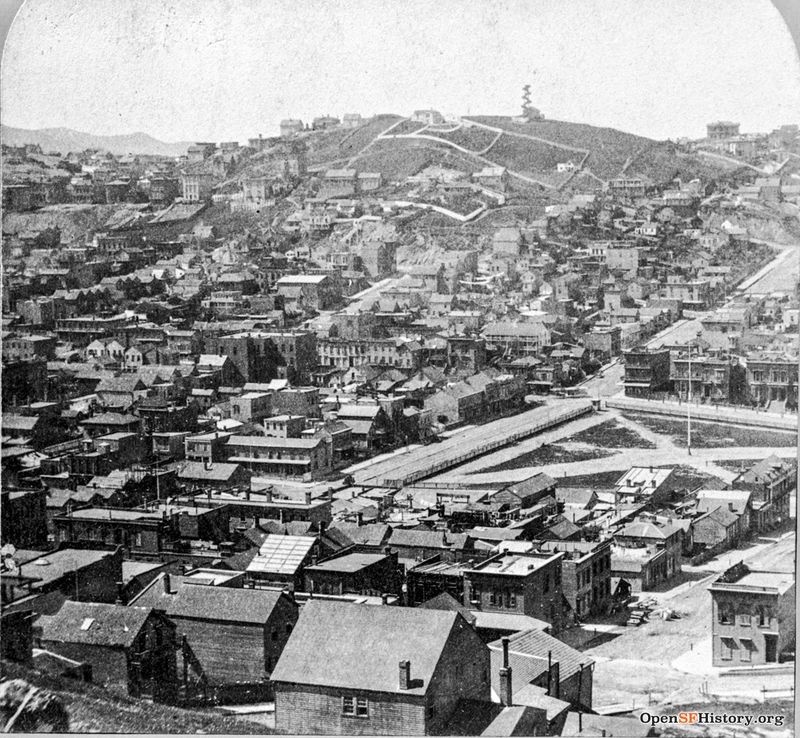