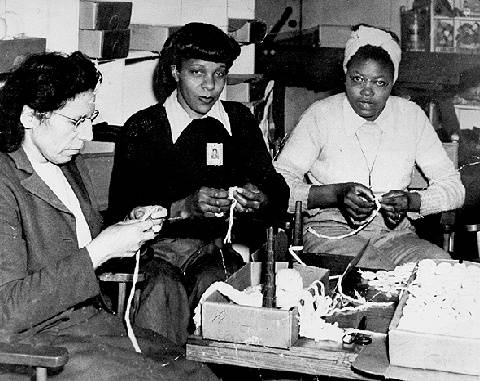 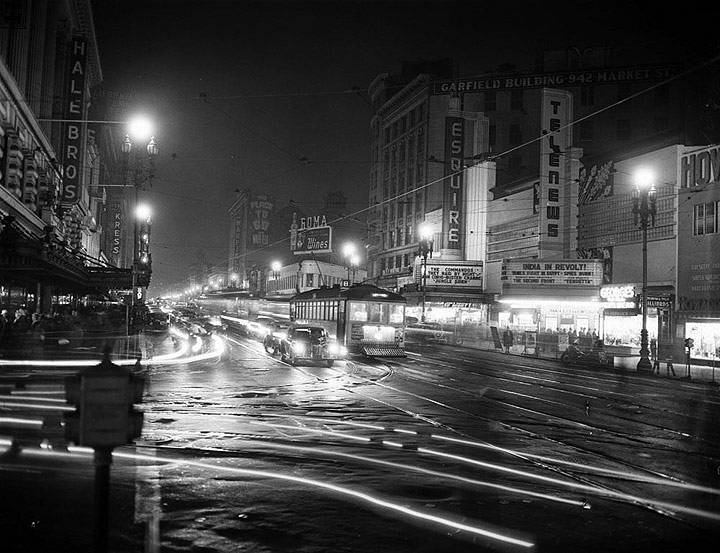 Market Street west from 5th, Aug. 15, 1942, during the "dim-out" to reduce the visibility of the City at the outset of WWII.

The 40,000 or so blacks who came to San Francisco to work during World War II mostly landed in the Fillmore District (aka Western Addition) from where the Japanese had recently been removed and sent to concentration camps in the interior. Housing discrimination was very strong, with whites in many neighborhoods refusing to rent or sell to non-whites. The Christian Science Monitor featured a cover story in July 1943 which reported that “segregation is practiced almost rigidly with the use of occupancy clauses in deeds and leases restricting colored races to certain rather well defined areas of the city.” Broussard in Black San Francisco points out that the Monitor's reference to restrictive covenants was important because before WWII these hadn't been widely used. The great migration of the war exacerbated residential segregation.

The rapid construction of federal funded housing projects led to a legal challenge to HUD's policy regarding racial occupancy of such projects. Of the five projects completed during the war (Westside Courts, Holly Courts, Potrero Terrace, Sunnydale, and Valencia Gardens—1,605 housing units) only Westside Courts had any black tenants. The San Francisco Housing Authority first denied, but later admitted using the so-called “neighborhood pattern” in determining tenant selection. This policy selected tenants to match the racial and ethnic composition of the existing neighborhood. Eventually this was declared discriminatory and blacks were allowed to move into any project. (In the 1990's, most of the wartime housing projects are occupied by black tenants.)

A decade and a half later, in 1958, Willie Mays, baseball's greatest center fielder and star of the San Francisco Giants, could not rent the house of his choice in Forest Hill until Mayor Christopher publicly invited Willie to stay as his guest until it was resolved (he got his house the next day).

The San Francisco Chronicle ran a series in January 1959 trying to give an explanatory context for the indisputably “high negro crime rate.” Before he became a liberal satirist, Art Hoppe wrote for the Chronicle as a reporter:

“Racial discrimination, as practiced in San Francisco, is a subtle thing. True, unlike the South, there were no signs saying “COLORED ONLY.” The signs said something far more ambiguous: “We Reserve the Right to Refuse Service to Anyone.” The Negro newcomer who walked into a lunch counter in the Richmond, the Sunset or the Mission was never sure whether he would get a sandwich or a scene. . . [After World War II was] over, the shipyards closed down and there weren't enough cranes and welder's tools and shipfitter's jobs to go around. It was the old adage of the Negro being the last hired and first fired. Many drifted back to the South. For those who remained, with their skills no one wanted and their memories of high wages, the defeat was thorough.

“You slam enough doors in a man's face,” comments Deputy City Attorney R.J. Reynolds, himself a Negro, “and he may break one of them down.” Deprived in many instances of equal job and housing opportunities, many a Negro in the Fillmore comes to blame the white for all his defeats, for all the injustices he met in life, big or little. Today, a racial bitterness hangs over the Fillmore like a pall.

“One afternoon, not so long ago, a young Negro college graduate came home bursting with pride to tell his mother he had just been accepted as an officer on the San Francisco police force. His mother looked at him strangely for a moment and then replied: “I would rather see you dead.” To the mother, a respectable, law-abiding woman, her son had gone over to the enemy.”

Four and a half years later, in mid-July 1963, another Chronicle reporter, George Draper, “lived continuously around the clock for two weeks in San Francisco's Negro world.” “I LIVED WITH S.F.'s NEGROES” screamed the 72 point headline on Monday, July 15. Draper wrote,

“Riptides of ragged emotion swirl day and night in the Negro ghettos of San Francisco... ‘It's the same old loaded dice being a Negro in San Francisco. Only they put a little sugar on ’em,’ said a New Orleans man trying to stay honest and support his wife and nine children. I have seen the sweetness of the little children, many of whom are illegitimate, and the touching affection shown them by the adults. But I have also seen how sour these same sweet children often turn when they grow up and bump head-on into the rough reality of a world that does not seem to want them. These are the husky youths with the processed hair and red pompadours and the narrow-brimmed, flying-saucer hats and the sideburns and goatees and the ever-present razor or knife.”

Draper goes on to portray a life imploding under the pressure of poverty, unemployment, and despair. Endemic violence and aggression are portrayed as somehow a racial characteristic. A month after this series ran, Dr. Thomas N. Burbridge, leader of the United San Francisco Freedom Movement, demanded of Mayor Christopher his group's “minimal” demands:

• Citizen review board for police

Just three years later, from September 28 to October 1, 1966, a major riot broke out in Bayview/Hunter's Point, the Fillmore and parts of the Haight, after police shot a young black man running from a stolen car. Bands of youth roamed the streets, smashing windows, looting stores and lighting fires. Mayor Shelley imposed a curfew and martial law, importing 1200 National Guard troops to put the lid on the uprising. Over six days, 359 people were arrested and 51 injured. The state of emergency was lifted on October 3, 1966.

Smaller riots along Fillmore in July 1967 led to 30 blocks being sealed off in the neighborhood. King's assassination in 1968 and the massive influx of hippies to the Haight-Ashbury led to greater police repression throughout the adjacent neighborhoods, and accelerated plans for “slum clearance.” Redevelopment Zone A-2, the Western Addition, became the focus of a protracted political struggle (See Western Addition Blues). 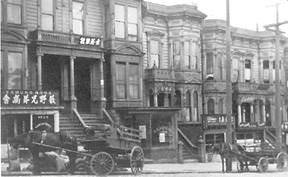 Japantown before internment opened up these buildings to black occupation.