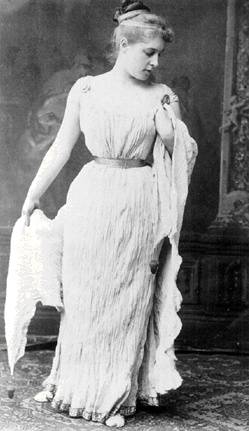 A woman from San Francisco during the Gold Rush.

When I first arrived here, there were only ten or twelve French women in San Francisco, but quite a number of American women had been here for some time, and were living in attractive houses with a certain amount of comfort and even luxury. They all had come from New York, New Orleans, Washington, or Philadelphia and had the stiff carriage typical of women in those cities. Men would look hopefully at them in the streets, at least men who had just come to California, but they much preferred the French women, who had the charm of novelty. Americans were irresistibly attracted by their graceful walk, their supple and easy bearing, and charming freedom of manner, qualities, after all, only to be found in France; and they trooped after a French woman whenever she put her nose out of doors, as if they could never see enough of her.

If the poor fellows had known what these women had been in Paris, how one could pick them up on the boulevards and have them for almost nothing, they might not have been so free with their offers of $500 or $600 a night. A little knowledge might have cooled them down a bit. But I'm sure the women were flattered by so much attention. Some of the first in the field made enough in a month to go home to France and live on their incomes; but many were not so lucky, and one still meets a few who have had a bad time and who are no better off financially than the day they stepped ashore. No doubt, they were blind to their own wrinkles and faded skins, and were too confident in their ability to deceive Americans regarding the dates on their birth certificates.

Many ships have reached San Francisco during the past three or four months, and the number of women in town has greatly increased, but a woman is still sought after and earns a lot of money. Nearly all the saloons and gambling-houses employ French women. They lean on the bars, talking and laughing with the men, or sit at the card tables and attract players. Some of them walk about with trays of cigars hanging in front of them; others caterwaul for hours beside pianos, imagining they are singing like Madame Stoltz. Occasionally, you find one who hides her real business and pretends to be a dressmaker or a milliner; but most of them are quite shameless, often scrawling their names and reception-hours in big letters on their doors.

There is a certain Madame Cassini who runs a collar shop and claims to be able to predict the past, present, and future and anything else you like.

All in all, the women of easy virtue here earn a tremendous amount of money. This is approximately the tariff. To sit with you near the bar or at a card table, a girl charges one ounce ($16) an evening. She has to do nothing save honor the table with her presence. This holds true for the girls selling cigars, when they sit with you. Remember they only work in the gambling-halls in the evening. They have their days to themselves and can then receive all the clients who had no chance during the night. Of course, they often must buy new dresses, and dresses are very expensive out here.

For anything more you have to pay a fabulous amount. Nearly all these women at home were street-walkers of the cheapest sort. But out here, for only a few minutes, they ask a hundred times as much as they were used to getting in Paris. A whole night costs from $200 to $400.

You may find this incredible. Yet some women are quoted at even higher prices. I may add that the saloons and gambling-houses that keep women are always crowded and are sure to succeed.

There are also some honest women in San Francisco, but not very many.