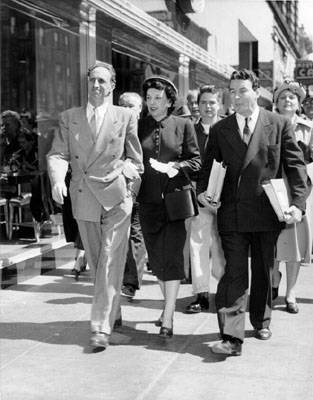 Harry Bridges (left) strolls down the street with Mrs. Bridges and defense attorney Vincent Hallinan after his conviction on charges of perjury and conspiracy, April 4, 1950.

Vincent Hallinan (December 16, 1896 - October 2, 1992) was an American lawyer and candidate for President of the United States for the Progressive Party in the 1952 election.

Hallinan was born into a large immigrant Irish-Catholic family and raised in San Francisco and Petaluma, California. His father Patrick was said to be a member of the Irish National Invincibles, a revolutionary organization that, among other activities, was reputed to have assassinated the Lord Mayor of Dublin and his secretary in 1881, the infamous Phoenix Park Murders, who then fled to the U.S. The elder Hallinan became a streetcar conductor in San Francisco, and was one of the leaders of the City Front Federation Strike of 1899-1900.

Trained by Jesuits in high school, Vincent passed the California Bar at the age of 22 after studies at the University of California, Berkeley.

Career in law and politics

His early successes in court included personal injury actions against the powerful Market Street Railway Company which ran most of the trolley lines on the streets of San Francisco and was a subsidiary of northern California rail interests. The rail company also owned the system whereby jurors' lists were kept and consulted by an appointed jury commissioner, in Hallinan's time an official of the railway, and he fought against this system for years before state law made the voter rolls the sole source of jurors.

Hallinan's years as a lawyer led to his selection in 1949, with a partner Roy McInnis, to defend Harry Bridges of the ILWU on perjury charges arising from accusations that he had once been a Communist but had denied it. 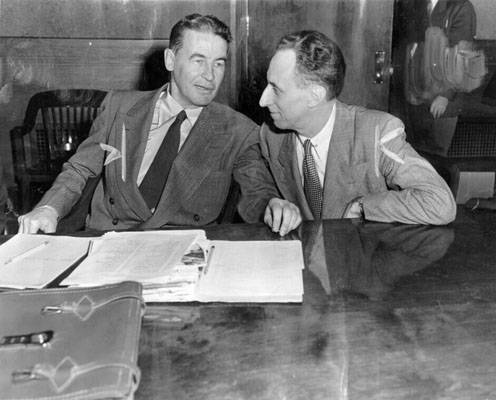 After the trial, Hallinan spent six months in prison for a contempt citation during the high profile Bridges trial. He was subsequently disbarred by the State Bar of California but fought his way back into the bar after he got out of McNeil Island prison for contempt of court in the Bridges case.

Hallinan ran for President of the United States in the 1952 election, as the candidate for Henry Wallace’s Progressive Party and was the third highest polling candidate in the election. 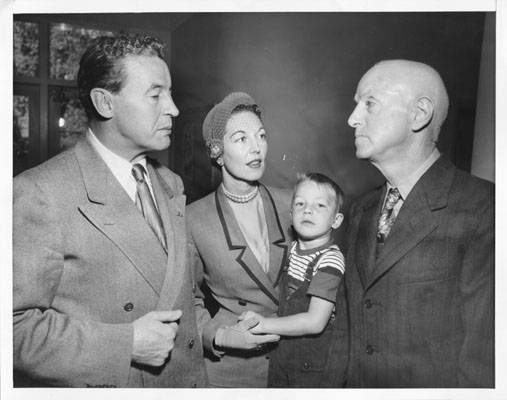 Attorney Vincent Hallinan, Independent Progressive Party Presidential candidate, accompanied by wife and son being informed by Inspector W.N. Murray that they can not vote unless they surrendered their absentee ballots, November 4, 1952.

He and his wife Vivian were indicted on 14 counts of tax evasion. Vincent was convicted on five counts and was fined $622,000 and served to 18 months in federal prison in his second federal prison term, after he reported only 20% of his income from 1947 to 1950. Vivian was acquitted.

In his 1963 autobiography, Hallinan claimed that he was prosecuted by the IRS for his political views, and that the government did not differentiate between tax avoidance (legal) and tax evasion. Also in his autobiography he argued for prison reform, against laws forbidding private consensual sex, contraception and abortion, he argued in favor of treating drug addiction as a medical condition and providing clean maintenance drugs to addicts, legalizing prostitution and against imperialism and American foreign policy.