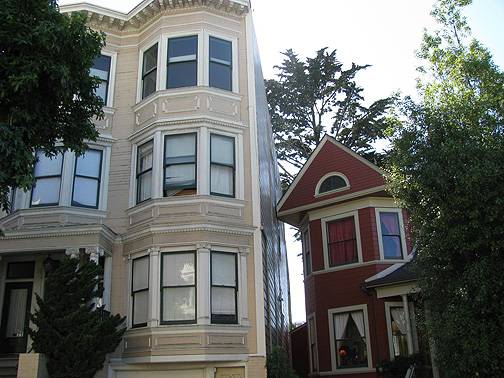 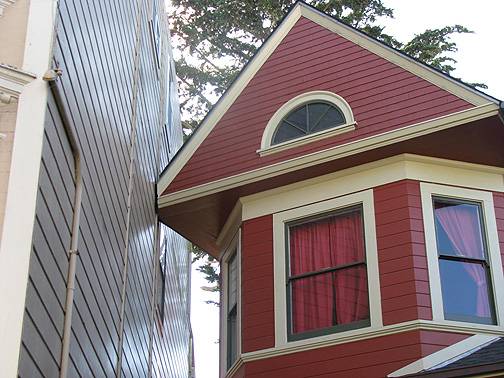 TURN RIGHT (WEST) ON JAVA AND THEN LEFT (SOUTH) ON MASONIC AVENUE. You will see two odd comments on neighborliness. The roof of the house at 1499 Masonic is coupled to its neighbor at 1501-05 Masonic in an unusual display of architectural closeness. The house with the sloped roof was built first and without proper attention to the property line. Later when the flats at 1501-05 were under construction, the contractor simply lobbed off the offending roof and built according to his original plans. 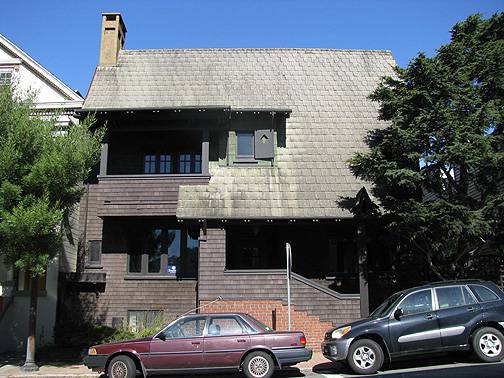 Across the street the house at 1524 Masonic was occupied by relatives of the homeowners up the hill at 1526 Masonic. They began to feud. The result of their quarrel was the construction of a "spitewall" on the second floor of the house at 1524 Masonic. The addition effectively cut off the bay and ocean view from the living room window of 1526 Masonic. The house at 1526 Masonic Avenue is probably the most architecturally significant building in the neighborhood. It was built in 1910 for Mr. and Mrs. E. B. Powers. Powers was a U.S. Attorney and he and his family had camped on this site after the 1906 earthquake. They were so impressed by the property's commanding view and seismic security that they commissioned architect Bernard Maybeck to build them a home there. At the time Maybeck (1862-1957) was a relatively unknown architect who had only recently gone into private practice, but he designed into the house architectural features which would later win him recognition as California's most prominent architect. The contrast of rough shingling with mammoth, smooth beams; the pitched roof; and the projecting eaves are typical of his style and gained him a reputation as the West Coast counterpart to Frank Lloyd Wright. Most Maybeck buildings are located in the East Bay, but San Franciscans remember him as the designer of the Palace of Fine Arts.