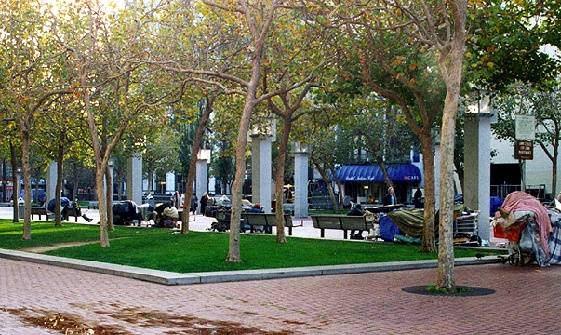 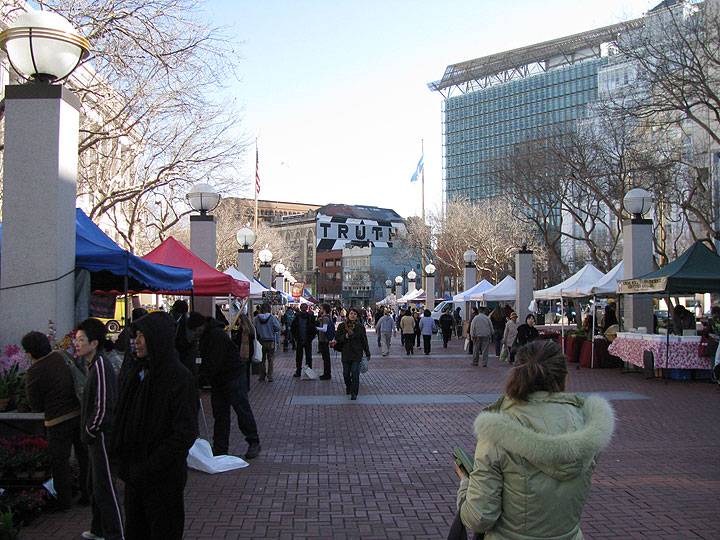 Heart of the City Farmer's Market at UN Plaza, June 2010.

Market Street. A hangover, a blur. I see myself from above, lost in a crowd at Market and 8th, milling around at the Heart of The City Farmer's Market in UN Plaza. There is a murmur, a hum. At the edge of the crowd, a grinning, bearded man sitting on a crate guards a bucket of crabs he's selling. The Black Market. There is something timeless, historical in the looks on the faces of the shoppers examining produce, the homeless men reclining on the lawn. Red bricks and the smell of pee. This is as close to Europe as this self-styled "Paris of the West" ever really gets.

No one knows how it got this way, but, this place, UN Plaza is at the heart of everything happening in the City these days, where everyone comes to get The News. The homeless in the Plaza are the real people that the candidates in the upcoming election at talking about when they talk about "Fixing the Homeless Problem." The mayor wants to use the cops to push them out of sight. His opponents want to put them on the news, a smear on Willie Brown's record. Food Not Bombs wants to feed them. The cops want to arrest them. Activists film the cops trying to harass them, to embarrass the cops. And when Brown ordered the cops to start seizing the homeless's shopping carts, news crews from every TV station in town flooded the plaza to film shopping carts. Suddenly, shopping carts were front page news, and UN Plaza was brought to people's living rooms. The former mayor even came out and warned Mayor Brown not to take the carts, not to get involved in a battle at UN Plaza, because that's what cost him the LAST election.

And, sure enough, the Mayor retreated and left the carts alone. There is something going an in UN Plaza that threatens to bring down anyone who gets involved in it.

This year, my own life keeps coming back to UN Plaza, too. Walking through it an my way to work, or on my way to the GA office. Walking past it sometimes on my way to the Free Clinic, my mind preoccupied with various health problems that, without money, remain undiagnosed. It's a place where the very idea of "San Francisco" is stretched too thin. No hills and cable cars here. All the stores sell postcards of some place else. But, I keep coming back.

There should be a mid-Market Street postcard. This is a misunderstood part of town. Deep in the shadows of downtown skyscrapers, you will find the "Instant ID" store where a man behind the corner makes photo I.D.s. And uses whiteout on the part where the name goes, if you want him to. You can be anyone, or disappear anytime There is the store that actually sells the designer plastic baggies that drugs come in, the ones with the heart designs, or the shamrocks on 'em. They have boxes and boxes locked away upstairs, possibly hand-crafted in a sweatshop in Malaysia. Where they come from no one knows, but they fill the gutters of Market Street... And there's Andy's Sunrise Juice Bar, when each sunrise finds Andy's as boarded up as the day before. And. next door, across the street from UN Plaza. is a long wooden fence covered in a mural. To anyone walking it's just a painting, but if you stop and look through the hole in the fence, the other side shows a trash-filled crater, right on Market. Huge rats run there, across broken glass and rubble, just out of sight, 24 hours a day. This is it, the other side of the postcard. The Heart of The City.

There are moments from my walks in UN Plaza this year that are etched in my mind vividly, silent moments with a certain dreamlike poetry. Coming up the escalator out of MUNI, watching how each step of the escalator has a name gratified on it, and they all rise up slowly and disappear into the machine. An old Asian man silently handing a live chicken to another man at the Farmer's Market. Newspaper blowing across the Plaza past men in blankets But I also remember all the protests. 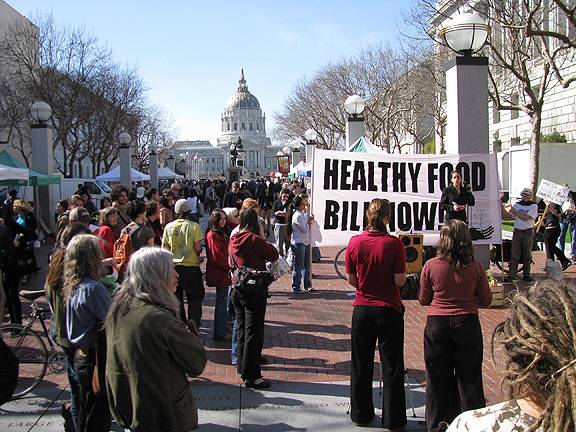 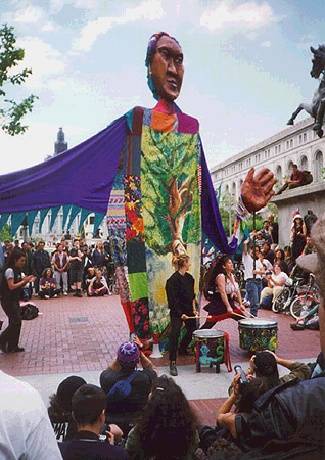 UN Plaza has become a site for political demonstrations. Seen here is a scene from May Day 1998, Wise Fool Puppet Theatre.

I remember playing drums with my band, with the statue behind us at a "Stop The Bombing in Yugoslavia!" rally in May (1999), and how the sound guy cut the rally short and the speakers were just old socialists anyway. I remember the crowd silently dispersing, cheated, as the sun disappeared behind a bank of afternoon fog, and summer suddenly seemed to have disappeared.

I'm back in UN Plan again, when the 3rd Free Mumia march gets herded through the Plaza, angrily holding torches aloft. Its dark and hard to see. A paint bomb silently flies out to splatter the statue with white paint. I wonder why we're in the Plaza at all, and not on Market. It seems like another trick. And it is. The cops surround us and announce that we're all under arrest. Everyone charges the police line.

I'm with a crowd of 15 or 20 who escape by running through the library, back out to Market. In front, the cops are beating people up.

In the morning, it was like it never happened. It didn't make the papers. It's not even in the books the library took off the shelf and hid away in storage under Civic Center. But it happened, and it happened in the Plaza.

Yes, UN Plaza. A place where something is happening that threatens to bring down anyone who gets involved. And I keep going back. It's not abstracted, like the headlines of the papers blowing past on Market, or the language of my friends' eviction papers. It's not something that's happening to someone else, like the booming economy. I have to check my ID when I walk past the "Instant ID" place, and look at the name again. I look at the crater through the hole in the fence, and I can feel a place like that growing somewhere inside of me. Someplace dark, like an Eddy Street bar, pitch-black at noon, hidden away like a room at the end of a hall on the top floor of The Alder. A place that never changes, the bottom of the broken elevator shaft at the Seneca, where pigeons murmur and rats run in the dark.. Some place that's always there. My own bench in UN Plaza.

Back in UN Plaza. Newspapers blow past. The names on the escalators rise up and disappear. The man with the bucket of crabs has found a buyer. There's a murmur, a hum. The afternoon fog rolls in, a chill hangs in the air over the men lining the benches. The new decade yawns and stretches ahead. This whole scene is frozen in my mind, a picture of something ABOUT to happen. I pass some guys with carts, drinking beer and camping, and remember a lost TV ad from my childhood. "It doesn't get any better than this." I think it will get better. It HAS to. In an Eddy Street bar at noon, in the basement of Mission Station, backstage at The Strand, all is still. It's the sound of the City, waiting to wake up. 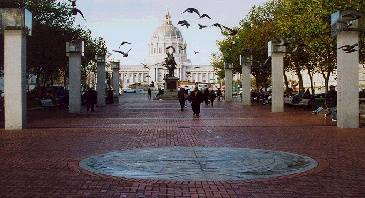 UN Plaza with the City Hall in the background, mid-1990s.
Photo: Chris Carlsson