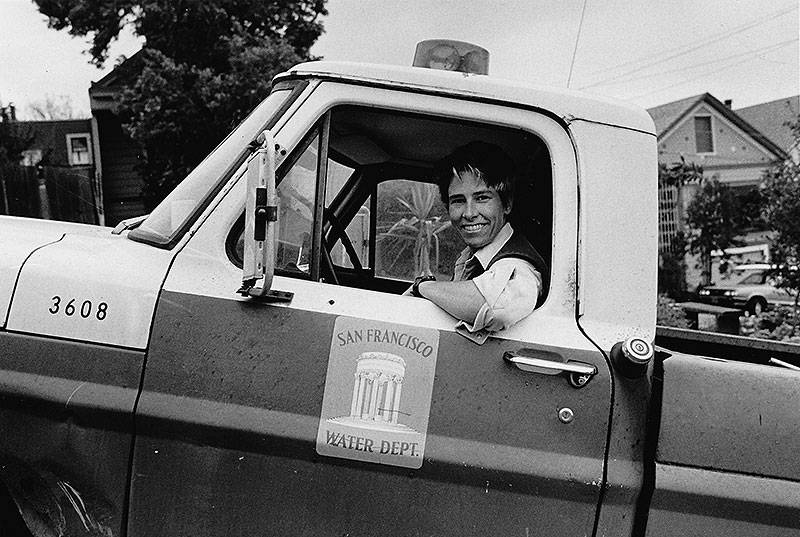 Molly Martin on the job for the San Francisco Water Department, 1980s.

“I don’t get it,” I said. “Why would you want to be a woman? We are discriminated against. The men we work with hate us. We get paid less. Why choose that?”

Jesus thought for a moment. “When I get in the shower and look down at my penis, I hate it. I feel like it shouldn’t be there.”

We were standing out in the corporation yard, away from our coworkers in the shops.

Jesus and I had worked together at the San Francisco Water Department for a couple of years and I was glad we’d become close enough for me to ask such a personal question. I was starting to get it.

But I was skeptical. “Jesus, you grew up with male privilege. How do you know what it will be like?”

“I know because I’ve already lived as a woman,” he said. “For three years.”

Jesus is a stationary engineer. His job is to maintain the pump stations for the San Francisco Water Department. I’m the electrician whose job is to maintain the electrical components of the system. I work out of a corporation yard in the industrial southeast part of the city. Each of us works alone but we often encounter each other out in the field at the pump stations. In a world of macho plumbers and engineers we gravitate to each other, more because we are different than because we are the same. We are both outcasts and we both must live within the dominant paradigm: a sexist and racist work culture with coworkers who believe we don’t belong there. It’s their territory.

It’s 1983. I’m a temporary worker with no benefits. I could be fired at any time with no recourse. I feel like I have to prove myself every day. I’m not out of the closet at work and I worry that this information might lead to a layoff.

The men think they can talk to me about Jesus. I wonder if they talk to him about me, but I think he is even more of an outsider than I am, transgender and Mexican. I’m a white lesbian and usually the only female. When you’re a double or triple minority you can never be sure why you are targeted for harassment.

“Is he gay?” They ask me. And I must try to explain transgender to these dickheads.

I know Jesus endures discrimination and harassment. The men he works with simply refuse to talk to him. They pretend he’s not there. I know from experience that this form of harassment takes a toll. It’s a way to get you to leave and it often works.

Despite all this Jesus appears to be the happiest person in the yard. He’s always singing or humming to himself and he has cemented a stereotype in my mind of Mexicans as people who smile through adversity. Yeah, I know that’s politically incorrect. I know that not all Mexicans are happy. Still, my brain forms stereotypes without my permission and I figure it’s best to acknowledge it, at least to myself. Jesus sets a good example for me. I tend to react to sexism and homophobia with anger. I can’t express it and so I walk around with the anger inside. And I take it home with me.

One day I’m assigned to work at the Lake Merced pump station in the southwest part of the city. That’s where the huge water supply pipes come in from the city’s Hetch Hetchy reservoir in the Sierra Nevada mountains. The pump motors here are 100 HP and they run on 4600 volts. (The highest voltage supplied to our homes is 220 volts.) The switchgear supplying the motors hums in a giant metal cabinet.

I’m the only electrician and it’s my job to maintain this equipment. But I’ve never been trained on high voltage. The union didn’t let women into its apprenticeship program and so I’ve learned the basics in a federal job training program and from experience. I easily passed the civil service test for electrician but I’ve never worked on more than 480 volt systems.

When the chief engineer orders me to diagnose a problem in the switchgear, I do my best to appear competent. In troubleshooting, the first step is to test. I pull out my trusty tester, a little black box with two wire leads and touch the leads to the live switchgear.

Electricians reading this will know what happens next—my tester is only rated for 1000 volts.

With an ear splitting bang the tester blows up and I’m thrown backward, landing on my butt on the concrete floor.

Jesus, the engineer on duty, rushes over, looking alarmed. “Are you ok?” He asks.

“I’m ok I’m ok,” I say. It’s the first thing we always say after a disaster, even if not true. The loud blast affected my hearing. It sounds like we’re under water.

The first emotion I register is embarrassment. I should have used the pole tester, rated for this purpose, but it’s a tool I’d never used before. I know I represent my gender to these men and my worth and work will determine their stereotypical view of women in their workplace. Their ideas of working with women will be based on me, until other females come along. My huge blunder will make all women look bad.

Jesus leads me into the chief engineer’s office where I try to recover, crouching in a corner on the floor, hugging my knees to alleviate the shaking. I could be dead. I could be dead. Jesus stays with me for moral support. And that’s when he tells me his story.

He grew up in Mexico City where he learned the trade of stationary engineer, maintaining the systems in big buildings. Then he migrated to San Francisco, became a U.S. citizen and got a job working as an engineer for another city department. That’s when he first decided to transition from male to female. He was living as a female, taking hormones and contemplating surgery when he was in a serious car accident. After time in the hospital he decided to go back to being male. That was several years earlier. In his present job he has always been male, but word got around and his coworkers know he once presented as female.

But he’s not happy as male. This is not who he really is. He’s thinking again about transitioning. He’s saving money for the operation and figures it will cost about $10,000.

“I want to tell you something I’ve never told anyone at work,” I say. “I’m gay.” And with that a sense of relief fills me. I’m no longer alone here.

Jesus nods. “I thought so,” he says, “but thanks for telling me.”

This admission makes me feel I can ask him anything without offending him.

“So are you attracted to men or women? If you transition will you be a lesbian?”

“I’m attracted to women,” he says. “Gender is different from sexual attraction.”

Jesus tells me he has gone to meetings of trans groups in the city, but he never feels like he belongs anywhere. He has no community.

To me this is tragic. I depend on my lesbian and tradeswomen communities to survive as an outsider.

“What was it like for you being a woman in the trades?” I ask.

“They assume a man knows everything,” he says. “That’s challenging, because of course we don’t. But we have to act like we do. It can lead to unsafe behavior. We’re all supposed to be cowboys.

“They assume a woman knows nothing. That has its own drawbacks. They refuse to pass on knowledge. They take your tools away and don’t want to let you do anything.”

The last thing I want to be is a woman who knows nothing. Nor do I want to out macho the boys, to act like I know something when I don’t. Doing that has nearly killed me.

Jesus would never say it. He’s too polite and gentlemanly. But I understand his point—stop acting like a dick.

This is the second of a three-part trilogy. Part one is here and part three is here.