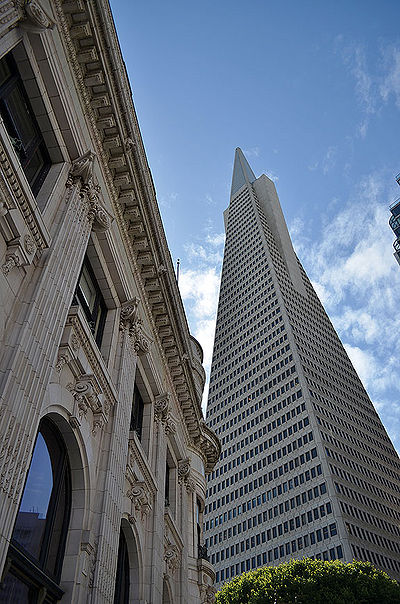 At the time of its completion in 1972, the Transamerica Pyramid at the corner of Washington and Montgomery Streets had few advocates. The structure, a present-day icon almost as representative of San Francisco as the Golden Gate Bridge and the cable cars, was called “inhuman” (and that by the city’s planning director!) and an “abomination” by the Chronicle’s architectural critic.

There was no question that the building was more than a little bit out of scale. The Transamerica Corporation decided that its three-story wedding cake of a structure across the street at Columbus and Montgomery—home to the Church of Scientology in 2013—was no longer in keeping with the image of the multibillion-dollar global conglomerate that it had become. It proposed a 1,000-foot-high building in an area where city zoning called for a 65-foot height limit. The architect of the structure was to be William Pereira, whose previous contribution to the San Francisco skyline had been the Fairmont Hotel annex tower—a work that by most objective standards would inspire little confidence in the architect’s aesthetic judgment.

The corporation, hell bent on constructing the tallest building west of the Mississippi, began a vigorous lobbying campaign, even hiring, according to Peter Booth Wiley, hippies to picket while carrying signs reading “Artists for the Pyramid.” The moving force behind the construction of the building was Mayor Joseph Alioto, who liked to think of San Francisco as a European city. In his mind, the Transamerica Pyramid was to be our Eiffel Tower. A hugely successful antitrust attorney, Alioto directed his powers of persuasion toward the Planning Commission and won approval for construction of the building by a narrow vote. The city even handed over a part of Merchant Street to advance the corporation’s plan.

The eventual size and shape of the building was the result of push and pull compromises. In response to community pressure, the height of the building was reduced to 853 feet, the top 211 feet of which was to be an uninhabited aluminum spire. The triangular shape of the building was, it was hoped, both a way of reducing the potential shadow cast by a blockbuster building and cutting back on the square footage to bring it closer into compliance with the city’s height-to-bulk guidelines.

Those interested in observing the construction of the building can rent a copy of the 2007 film Zodiac that presents a time-lapse computer-generated version of the building as it went up between 1969 and 1971. In fact, the building has been cast in several supporting movie roles, most notably in the 1978 remake of Invasion of the Body Snatchers in which it becomes a visual motif. The Transamerica Corporation was tied to United Artists at the time, the company that made the movie, thus making the pyramid one of the most conspicuous examples of product placement in film history. 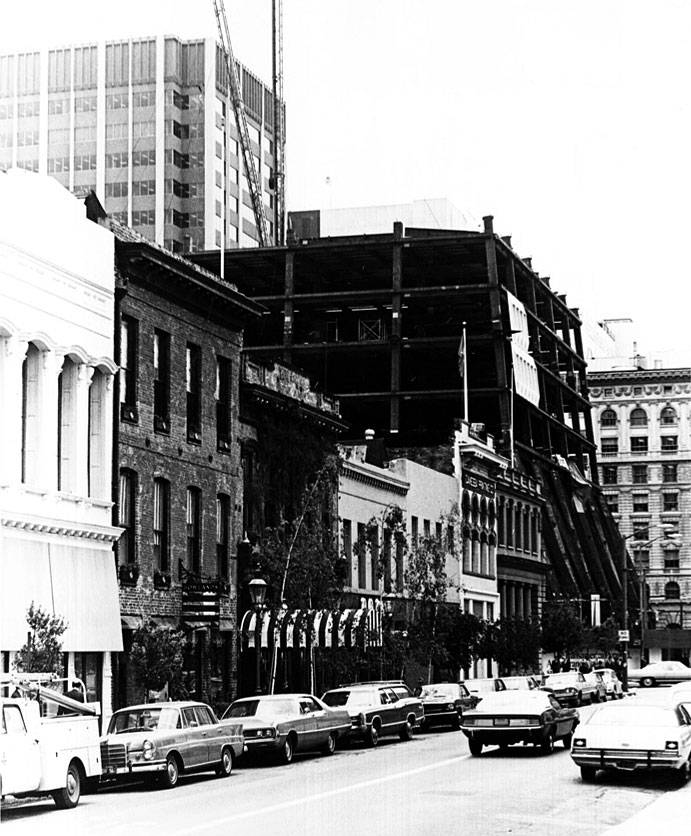 Excerpted with permission from Art Peterson's book, "Why Is That Bridge Orange?" published in 2013, by Inquiring Minds Productions.
Retrieved from "http://foundsf.org/index.php?title=Transamerica_Pyramid&oldid=30251"
Share this page: