by Molly Martin, originally published as "The Birth of Our Movement: Tradeswomen in the San Francisco Bay Area" on tradeswomn blog, republished with permission. 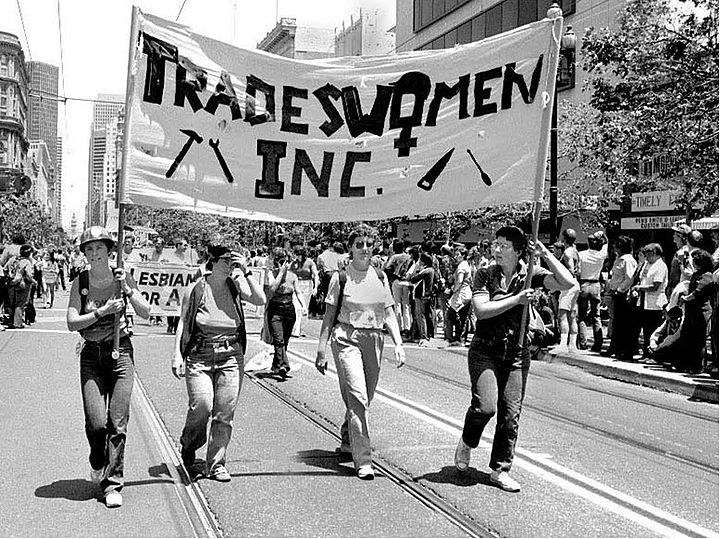 The tradeswomen movement might be the most unsung subset of the feminist movement of the late 20th century. Like the feminist movement, it did seem to erupt suddenly, simultaneously, across the country and the world. All at once in the mid-1970s women began demanding access to blue collar jobs that had been the exclusive domain of men, like construction, utility maintenance, driving, dock work, policing and firefighting.

But the movement was not as spontaneous as it appeared. Women had been working for decades toward equality under law. Women had been included—however disingenuously—in the Civil Rights Act of 1964 and then Title IX, the 1972 law requiring gender equity in education including sports programs. Young feminists, studying the statistics, were painfully aware that on average women working full-time made only 59 cents for every dollar made by men (in 2011 the proportion had risen to 77 cents). Inspired by the Civil Rights Movement and efforts by black men to enter the white world of union construction, women began to organize toward employment equity. 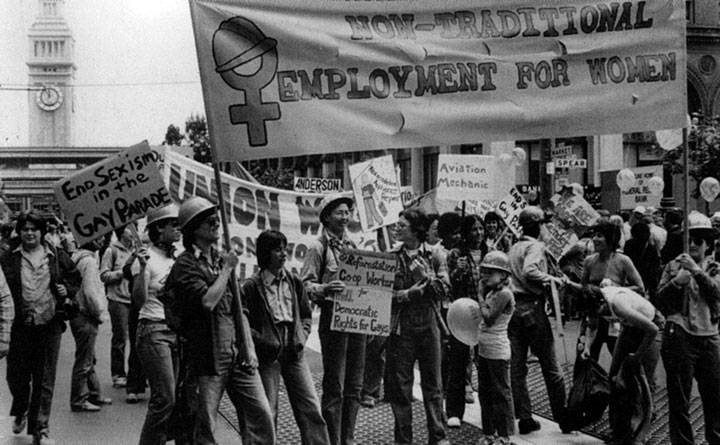 In the 1970s and 80s organizations advocating for women’s access to these jobs sprang up all over the U.S.: Chicago Women in Trades, TOP-Win in Philadelphia, Northern New England Tradeswomen, Hard-Hatted Women in Cleveland, Nontraditional Employment for Women in New York, Women in Trades in Seattle.

Early tactics included demonstrations and marches and efforts to enter union apprenticeships in the construction trades. The training programs, administered by joint committees made up of employers and unions, are comprehensive and free. An apprentice works full-time while completing training, usually at night during the program, usually four years. Hourly pay increases until you “turn out” as a journeyman in your trade. The apprenticeship system, especially in desirable high-paid trades like electrician, plumber, operating engineer, sheet metal and ironworker, had been closed to all but white men, primarily relatives of men already in the trade. The federal government had put in place agencies to enforce the new civil rights laws and women began to organize to tear down that wall.

Carpentry was a popular choice among women. The idea of working with wood, which it turns out construction carpenters don’t do much of—they mostly build forms for concrete–seemed romantic. The carpenters’ union was and still is the largest construction union with the biggest apprenticeship program and the most jobs. In the 1970s, it was one of the easiest apprenticeships to get into. Other crafts required applicants to take aptitude tests, submit to interviews and wait for months for a score but the carpenters used the “list” method, just creating a list of applicants, first come first served.

In 1975, with support from a sister nonprofit, Women in Apprenticeship Program (WAP) whose purpose was to place women in these apprenticeships, women learned that getting into the carpenters’ apprenticeship was just a matter of standing in line at the union office and signing up. The night before the apprenticeship opened, women formed a line outside the union door so there would be no question about who was first. Sleeping for one night on a concrete sidewalk seemed small payment for the opportunity to enter a training program which would also assist in placing trainees in construction jobs. 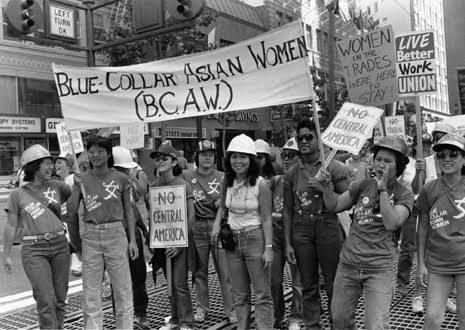 When the union’s doors opened the next morning the women who had waited in line all night found that their names did not appear first on the apprenticeship list. They also learned that carpentry was a “hunting license trade,” meaning that the apprentice must first find a contractor willing to hire him before he can be indentured into the apprenticeship. Hiring and, therefore, the apprenticeship was controlled by the contractor/employers who preferred to choose known workers rather than request new apprentices sight unseen from the union’s list. The women did travel to various job sites in the Bay Area seeking work, but no contractor would hire them. They decided to look for a lawyer.

Filing a lawsuit was a decision not taken lightly. It almost certainly meant that the filer would become a martyr to the cause and would be blacklisted from future work. It could also mean months and years of shepherding a case through the system. And, as much as it was apparent that the unions were acting as the enemy of women, the women did not want to make the unions their enemy. The unions were the only reason trades jobs paid decent wages with decent working conditions.

Litigation cannot be the sole foundation of a mass movement, but litigation in the 1970s when class action lawsuits proliferated and very often resulted in wins, became an important part of activists’ strategy for change. San Francisco Bay Area tradeswomen activists were lucky to have advocate lawyers at Equal Rights Advocates, a law firm devoted to defending working women, and the Employment Law Center. Across the country, most women fighting employment discrimination were out of luck. No lawyer would take their cases.

Lawsuits filed by individuals rarely resulted in changes to laws or regulations. Women were pressured to settle for cash and to agree not to disclose the settlement. The lawsuit that had won affirmative action goals and timetables for women in the construction trades was filed by a coalition of feminist advocates against the U.S. Department of Labor in 1976.

The case that resulted from the 1975 attempt by women to join Carpenters Local 22, Eldredge vs. Carpenters Trust, kicked around in the courts for 21 years and was finally decided in favor of the women. Judge Betty Fletcher of the Ninth Circuit Court of Appeals ordered the union to reserve 20 percent of its job referrals for women. In her opinion, an obviously exasperated Fletcher wrote, “The bottom line is that women historically have been systematically excluded from carpentry work and for more than two decades have sought relief through the courts while the Joint Apprenticeship Training Committee, the craft’s gatekeeping organization, has waged a relentless battle to preserve the status quo.” But the carpenters union ultimately was the real winner. For a time, the union complied. It found plenty of women in the San Francisco Bay Area anxious to enter the trade, putting the lie to its past complaints that women weren’t interested in construction work. Then, when the 20 percent apprenticeship goal was met, the union petitioned the court to end the consent decree. The settlement agreement failed to require follow up and when the judge’s decree ended so did the hiring of women.

The women’s lawyer, Alberta Blumin of Berkeley, essentially worked for free, but there is no accounting of the legal costs to the JATC for its “decades’-long legal recalcitrance and foot dragging” (Fletcher’s words).

In 1978, when the new federal affirmative action rules and regulations went into effect, tradeswomen and women who aimed for careers in construction celebrated. The goal for women to be hired on federally funded jobs was 6.9 percent, increasing to 9 percent over five years. Apprenticeship programs were required to indenture 23 percent women (the number was one half the percentage of women in the general workforce—46 percent). If the unions and employers actually met the goals and the federal and state governments actually enforced them, it would only take a few years for women to achieve parity in the construction trades.

The new comprehensive federal guidelines that resulted from the Department of Labor lawsuit spelled out more than just numerical goals. Titled Executive Order 11246 and upgraded under President Jimmy Carter, the law acknowledged that a critical mass of women would be needed to counter the isolation and harassment women were experiencing in nontraditional jobs. The regulations pointed out working conditions and safety as paramount.

That year, 1978, union construction apprenticeships across the US were forced to induct their first women, but most women were still alone in apprenticeship classes with men. Many dropped out. In San Francisco’s IBEW Local 6, four women began the apprenticeship. One, Pat Snow, was able to retire with a full pension after 25 years as an “inside wireman.”

The large hope was not fulfilled. The 6.9 percent goal was never met except for a few isolated jobs, and never increased. Nor was the apprenticeship goal met, except in the Seattle IBEW Local 46 program, which for seven years was headed by a female electrician, Nancy Mason.

A good percentage of women who entered the construction trades in the 1970s were college-educated and middle class. Economics was a driving factor. Unemployment was high and women had difficulty finding well-paid jobs in more traditional occupational sectors. But many women didn’t want to work as teachers, nurses or secretaries (the main historical choices). The feminist movement had posed the question: Why can’t I do this? Suddenly everything seemed possible. Women who didn’t want to dress in skirts and pantyhose, whose dream was other than sitting at a typewriter all day, who weren’t interested in teaching kids, found a welcome alternative in construction work. You could get up in the morning, throw on the same clothes you’d worn the day before, put a hard hat on uncombed hair and go to work. You could drive around town and point proudly to buildings you had built. In union construction work men and women make the same wages and the contract provides for decent working conditions and benefits.

Among the many reasons to choose construction work was free apprenticeship training and no requirement for college education. Activists saw the breaking of resistance to women in trades as a path out of poverty for women. Here was a way to counter the “feminization of poverty,” a shocking trend especially as more women in the U.S. became single heads of households. Such a demographic shift could end poverty for women and children all over the country. 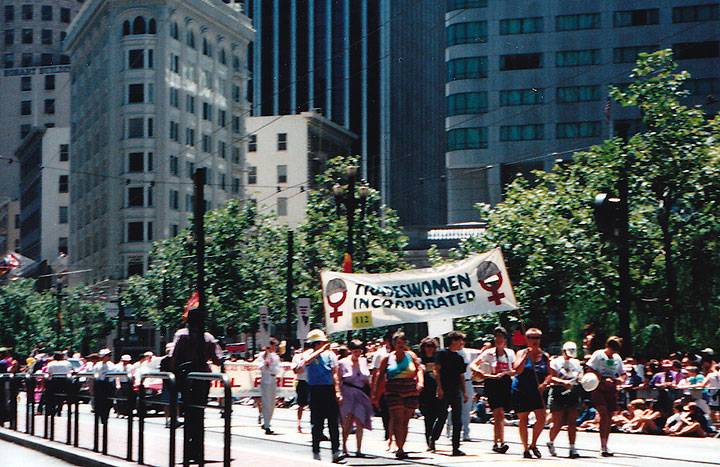 In 1979, Tradeswomen Inc., a 501c-3 nonprofit, was organized by a group of advocates including Madeline Mixer, director of District IX of the Women’s Bureau, US Department of Labor; and Susie Suafai, director of WAP. The goal was to access money to expand the already successful WAP project that was placing women in Bay Area union apprenticeship programs. For a short time, under President Jimmy Carter, construction jobs opened up to women. But after Ronald Reagan’s election in 1980 everything changed. The Reagan administration immediately dismantled and defunded whatever affirmative action programs it could, and stopped enforcing regulations already on the books.

Women, however, continued to fight to enter construction and nontraditional jobs. 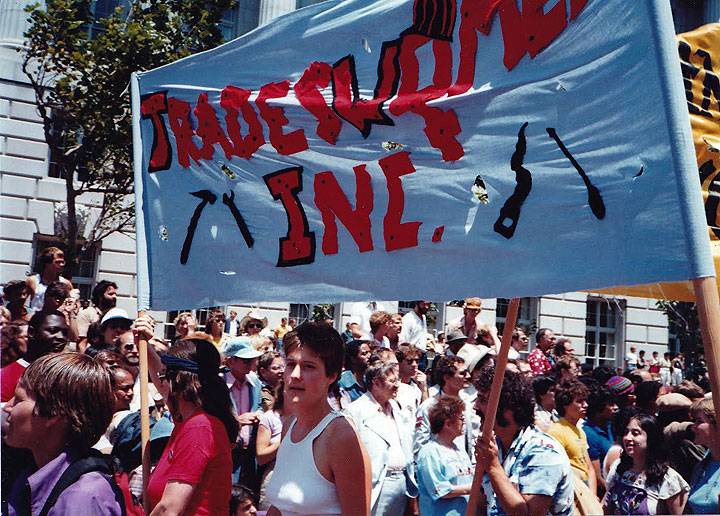