by Gloria Lenhart, originally published in The Semaphore #204, Fall 2013 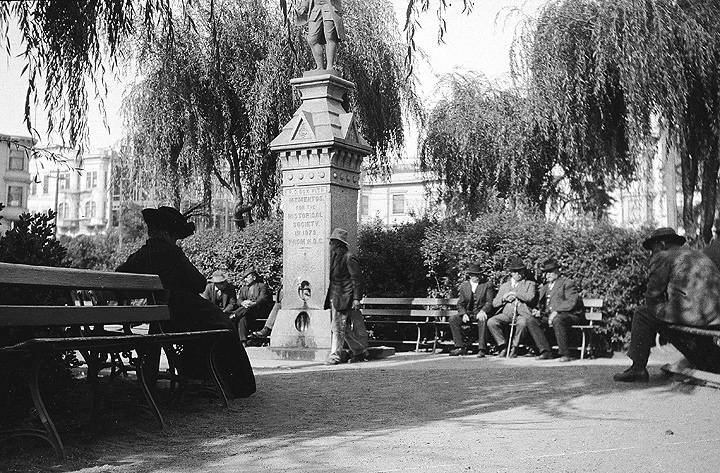 Italian Paesani enjoying a day in Washington Square while in the company of the Benjamin Franklin statue. The base of the statue reads, “P O Box with Mementos for the Historical Society in 1979 from H.D.C.” H.D.C. stands for Henry David Cogswell.

On a rainy Sunday in April 1979, a group of dignitaries headed by then-Mayor Dianne Feinstein arrived in Washington Square. They were there for the official opening of a 100-year-old box retrieved from the base of the Ben Franklin statue. The box, 18-inches-square and made of lead, was a time capsule that was put in the statue’s base in 1879 by dentist Henry Cogswell. Now the day had arrived to discover what treasures Dr. Cogswell had placed inside.

Dr. Cogswell practiced dentistry out of a tent during the Gold Rush, and later made millions of dollars in land speculation. The Franklin monument was his gift to the city, one of many fountains dedicated to the temperance cause that he donated to various cities across the country. Most of Cogswell’s monuments have long since been removed and were either lost or scrapped. The time capsule recovered from the Washington Square monument would be the first Cogswell time capsule to reach its maturity and be publically opened.

What is a time capsule?

A time capsule is a vessel filled with objects and messages designed to be opened at some specific future date. The idea is to provide a later generation with a physical link to the past. Ancient tombs, sunken ships and even old landfills can provide us with a peek into life in times past, but strictly speaking they’re not time capsules because they weren’t placed with the specific intention of future retrieval.

Almost from the moment that humans began to build, they began tossing keepsakes into a building’s foundation. Small clay figures have been found in Stone Age brick walls, built before written language was developed to explain why they were put there. Cornerstones of modern buildings are still filled with notes, coins and various talismans, although the motivation is more for luck than to send a message to the future.

In his definitive book, Time Capsules, a Cultural History (McFarland & Co, Inc, 2003), author William E. Jarvis defines three types of time capsules. Indefinite time capsules, such as artifacts buried in building cornerstones, have no defined opening date, and may, indeed, never be opened. Millennial capsules, designed to be opened 1,000 years or more in the future, are a relatively recent invention. Examples of millennials include a time capsule launched in the Voyager spacecraft, designed to return to earth in 10,000 years, and the two capsules buried during the 1939 and 1964 New York World’s Fairs, with planned opening dates of 6939. Centennial capsules, such as the one retrieved from the Franklin monument, are designed to be opened in 100 years or less. Jarvis doesn’t mention the newest trend in time capsules, the video message. A quick search on YouTube brings up hundreds of thousands of “Message to my Future Self” entries.

The popularity of the centennial-type time capsule began in Philadelphia during the 1876 Centennial celebration. It was here that the first modern time capsule, the Century Safe was displayed. Signatures were collected in large albums and sealed inside. Then the safe was transported to Washington, D.C. It was kept in the U.S. Capitol building until it was opened in 1976 by President Gerald Ford during the country’s Bicentennial celebration. Now called the “Centennial Vault,” it’s still on display in the Capitol today. A photographer named Charles D. Mosher, also launched a time capsule at the 1876 Centennial, but it did not fare as well. Mosher filled his Memorial Time Vault with photographs he took of well-known as well as ordinary Americans. It was then put in the basement of Chicago’s City Hall and promptly forgotten. Workers stumbled across Mosher’s vault when the building was razed in 1908 and opened it without ceremony nearly 70 years shy of its scheduled date.

Premature opening is a constant problem with time capsules. The fact that the Washington Square time capsule survived intact to be retrieved 100 years later is a rare feat. Like buried treasure, time capsules often get lost or forgotten. In the 1980s, the cast of the TV show “M*A*S*H” put together a time capsule that included props, costumes and scripts from the show and buried it on the MGM Universal lot. Several years later, during construction of a hotel on the property, a construction worker found the box. He contacted actor Alan Alda, who said in his memoir that he told the worker to just keep it.

To assist in tracking down missing time capsules, the International Time Capsule Society, headquartered at Oglethorpe University in Atlanta, maintains a Most Wanted List of Lost Time Capsules. Oglethorpe University is also home to the Crypt of Civilization, a underground bunker about the size of a one-car garage filled with over more than 200 books, diagrams of great inventions, copies of famous speeches, the seeds of flowers, plants, vegetables, fruits and trees, jazz records, a model train, an air conditioner and much more. Sealed in 1940, its opening date is targeted for the year 8113.

The San Francisco Public Library started a registry to track time capsules hidden around the city. The registry is, in fact, just a folder containing information on more than a dozen projects, including capsules resting in two different monuments in Golden Gate Park, under a Russian Hill apartment building, in a Union Square hotel, on Angel Island and on Mount Davidson. 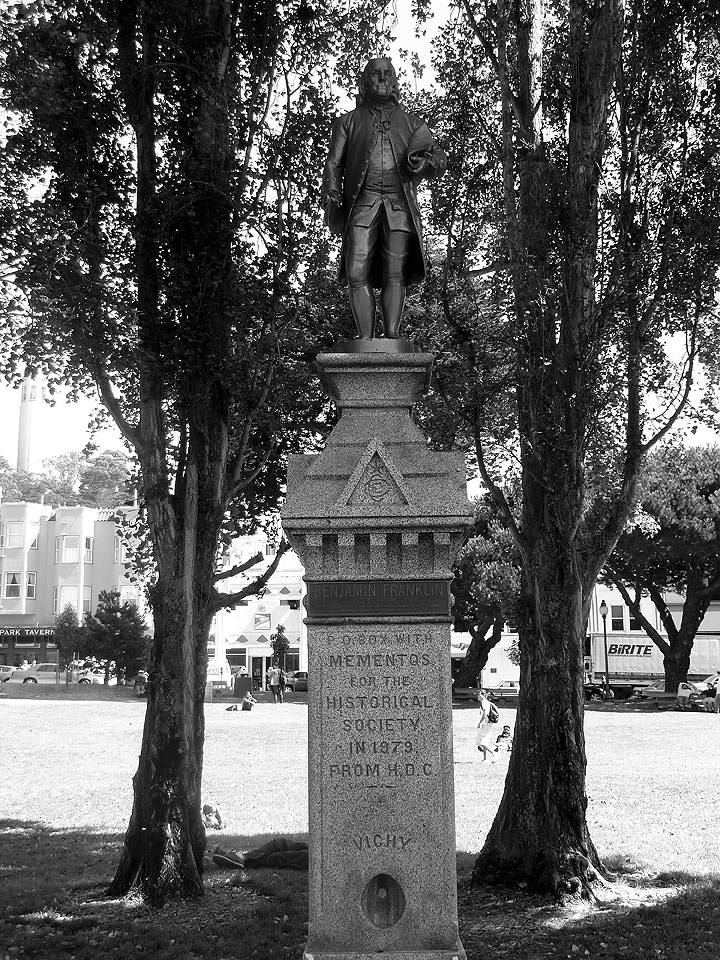 There was a great deal of anticipation in the months leading up to the April opening of the Cogswell’s time capsule in Washington Square. What treasures might lay inside? Speculation included gold nuggets, a deed to a forgotten gold mine, stock certificates and antique jewelry. The city attorney issued a ruling that no matter what was found inside, the contents would become property of the California Historical Society. Dr. Cogswell had engraved instructions on the side of his monument that read, “P O Box with Mementos for the Historical Society in 1979 from H.D.C.”

Despite high hopes, time capsules are far more likely to be filled with mundane items such as railroad schedules, newspapers, speeches and a few odd coins, than priceless gems. The satirical publication, the Onion, spoofed this drawback in its headline: “Newly Unearthed Time Capsule Just Full of Useless Old Crap.” Including valuable items in a time capsule can make it a target for theft, a good reason for putting in only the ordinary and commonplace.

Even so, Cogswell had gone to great effort to secure his box for its trip to the future. Retrieving the time capsule from the base of the Franklin monument took more time and effort that anyone imagined. A crew from Parks & Recreation came with a crane and it still took them more than an hour to disassemble the monument and find the 18-by-18-inch lead box. The 6-foot tall, 400-pound statute of Ben was removed for cleaning. They also replaced two missing fingers and repaired two bullet holes. The unopened box was secured until the official opening.

About 1,000 people gathered in Washington Square for the opening of the box. Mayor Feinstein was joined on the dais by Supervisor John Molinari, James Moss of the California Historical Society and Ann Halstead, president of the Telegraph Hill Dwellers, which was celebrating its 25th anniversary. Also present was a distant relative of the childless Dr. Cogswell (when asked how he was related to the Gold Rush dentist, he said he’d have to look at a flow chart) and representatives of Cogswell College. A local Boy Scout troop led the crowd in a salute to the flag and a thin parachute covering Ben Franklin was removed, revealing the refurbished statue. Then it was finally time to open the box.

Mayor Feinstein reach in first and held up a copy of Harper’s Magazine dated 1872. There was also an almanac; copies of 14 different newspapers in English, Italian, German, French and Scandinavian; some coins; a tin of mints; and a rock that someone said was silver ore. There was also a note from a 14-year-old boy named Sackett Cornell, who predicted that by the time the box was opened steam-powered flying machines would fill the air and women would still not be allowed to vote or become president. Molinari held up a string of old buttons, which promptly broke and the Boy Scouts scrambled to find them in the wet grass. After that, the lead box and the rest of its contents was handed over to the California Historical Society, which announced that the contents would be displayed at the San Francisco Public Library. It was decided to skip the rest of the speeches so that everyone could get in out of the rain.

A Message for the Future

Before the crowd dispersed, though, there was one more item of business – the installation of a new centennial time capsule. The items assembled for it included two poems by the city’s poet laureate Lawrence Ferlinghetti; notes from San Francisco’s leading citizens; a videocassette of the evening news; a pair of Levi’s jeans, size 0; menus from Julius’ Castle, La Veranda, Guido’s and Savoy Tivoli; Leggs pantyhose; birth control pills; a Bic lighter and a bottle of Cabernet Sauvignon. Just before the box was closed, one of the Boy Scouts dropped in a hastily-scribbled note that said, “Paul was here.”

A new inscription was carved on the monument to remind future residents that the new time capsule waits inside, scheduled to be opened in 2079. Only 66 more years to go!