The Weird History of the St. Francis Hotel 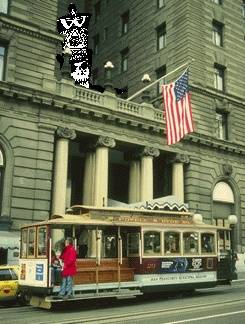 Entrance to the St. Francis Hotel, 335 Powell Street, between Geary and Post.

On September 23, 1975, Sara Jane Moore fired two pistol shots at President Gerald Ford--from the highly improbable distance of 40 feet--as Ford stepped through the St. Francis' doors. Just as she was squeezing off the second shot, an ex-Marine named Oliver Sipple grabbed her arm and ruined her aim. The incident created public sympathy for Ford, and seemed to offer proof that lone nuts can shoot at Republicans as well as Democrats, black leaders, and other subversive types.

But like Lee Harvey Oswald, Sara Jane Moore turned out to be a very odd sort of lone nut. Like Oswald, she had posed as a leftist while working undercover for national police agencies. While working as an FBI informer, Moore infiltrated a left-wing group called People In Need, which had organized the great Patty Hearst food giveaway in response to SLA demands. She also infiltrated Cesar Chavez's United Farm Workers Union on behalf of the FBI. At some point during her career as an FBI snitch, Moore apparently began to feel guilty. Finally she confessed to her comrades--who naturally ostracized her. Meanwhile, she confessed to the FBI that she had blown her cover out of sympathy for the radicals and the FBI ostracized her, too.

They Made the Earth Move.

World-famous actor John Barrymore was staying in the St. Francis Hotel on the eve of the great quake of 1906. Tradition has it that he was entertaining a young lady— the fiance of another man—in his suite at the time, according to William Bronson in The Earth Shook, The Sky Burned. Drunk on booze as well as passion, Barrymore at first mistook the powerful rumbles of the quake, and the swayings of the walls, floor, and ceiling of his room, for a purely physiological phenomenon. Later, after martial law had been declared and Barrymore put to work stacking bricks in Union Square, the actor's uncle John Drew said, "It took an act of God to get John out of bed and the United States Government to get him to work."

September 5, 1921: Silent film comedian Fatty Arbuckle threw a Labor Day party in the suite of rooms overlooking the corner of Geary and Powell Streets (rooms 1219, 1220, and 1221) and all hell broke loose. According to the prosecutors, Fatty raped actress Virginia Rappe with a bottle, causing her to bleed to death. Though never convicted of murder, Arbuckle didn't seem quite as funny after the incident, and his career hit the skids.

Weird footnote: Another celebrated death at the St. Francis occurred when jazz singer Al Jolson keeled over while playing gin rummy with his manager.

Through a Glass Door, Darkly: Kif-Smoking Novelist Breaks on Through in San Francisco.

Summer, 1966. Paul Bowles, globetrotting literary genius and devotee of kif--Moroccan marijuana extract mixed with tobacco--was passing through San Francisco on his way to the Far East. (A few years earlier, City Lights had published Bowles' collection of kif-inspired stories, A Hundred Camels in the Courtyard, which featured on its title page the Moroccan proverb, "A pipe of kif before breakfast gives a man the strength of a hundred camels in the courtyard.") Bowles habitually smoked great quantities of kif; the drug helped cleanse his doors of perception, giving him access to the fantastic, often terrifying inner landscapes he describes so inimitably in his fiction. While he was staying at the St. Francis Hotel, either Bowles' doors of perception or the hotel's translucent doors were a bit too well cleansed, for Bowles stepped right through one of the plate glass doors and badly injured his knee, which required many stitches to repair.

In the fall of 1978, cult leader Jim Jones was getting paranoid. Convinced that he was a victim of CIA harassment, Jones was hunkering down in his Jonestown bunker and imagining that paramilitary assassins were taking potshots at him from the jungle. Back in San Francisco, People's Temple representatives were trying to expose the conspiracy. They hired well-known Kennedy-assassination researcher Mark Lane, author of Rush to Judgment, and set him up with partner Don Freed at the St. Francis Hotel. On September 4, the Temple rented a day-room suite, rounded up one of the alleged participants in the CIA conspiracy against Jim Jones, and grilled him. The conspirator was private eye Joe Mazor, who was lured to the meeting with a bogus offer of a $25,000 movie consultancy fee for a nonexistent film about Jonestown. Lane waved big bills under Mazor's nose, and Mazor promptly confessed that he had participated in some kind of paramilitary activity against Jonestown, presumably on behalf of the CIA. (For a more elaborate description of this bizarre meeting, see Tim Reiterman's Raven.)