The WPA – The Stimulus Package of Its Day

The Works Project Administration (WPA) during the 1930s and 1940s was the original government stimulus—a program designed to put thousands of civilians, including artists, to work. 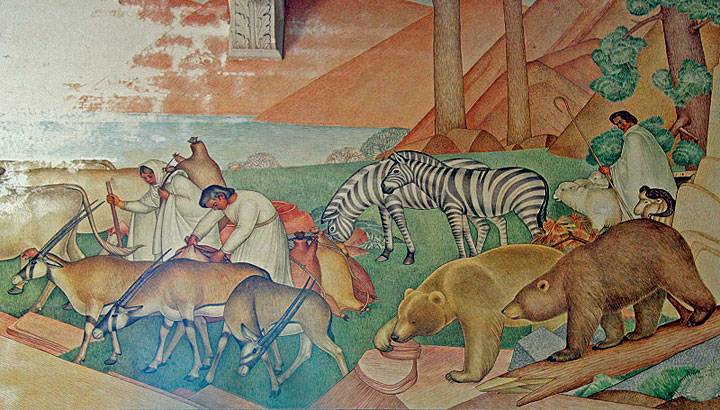 Noah and the Ark mural at the Mothers House, San Francisco Zoo.

It was a badly-needed relief measure established as the Works Progress Administration by executive order in 1935, in the deepest days of the Great Depression. The program was redesigned in 1939, renamed and transferred to the Federal Works Agency. Headed by Harry L. Hopkins and supplied with an initial congressional appropriation of almost $5 billion, it offered work to the unemployed on an unprecedented scale by spending money on a wide variety of programs, including highways and building construction, slum clearance, reforestation, rural rehabilitation and art. In response to public criticism of federal arts projects, Hopkins remarked that “artists have got to eat, just like other people.” The artists and their contemporaries were the beneficiaries of that philosophy, but all Americans continue to benefit from the project’s artistic legacy.

Although there were many agencies with a plethora of acronyms that came under the WPA umbrella, the overall program was instrumental in subsidizing work for hundreds, if not thousands, of unemployed artists.

We are fortunate to have many examples of that project still visible and vibrant in the city. Most of it is free for the viewing from one end of San Francisco to the other, a veritable museum of art throughout the city. 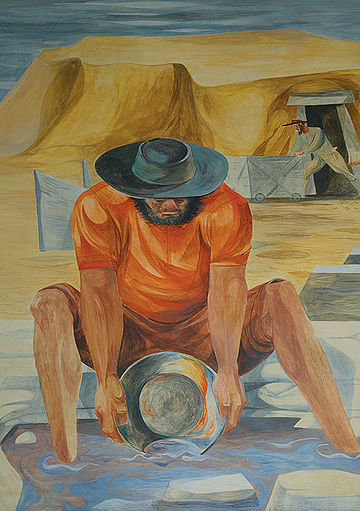 Murals were and still are perhaps the most well-known WPA commissions. The eastern-most site of San Francisco murals is Rincon Annex, the old main post office at Mission and Spear streets. They were the result of an allied WPA program for national post offices called the Section of Fine Arts, administered by the Procurement Division of the U.S. Treasury Department.

The Rincon murals are a succession of 27 panels by Russian artist Anton Refregier who executed the murals over an eight-year period beginning in 1940. Entitled History of San Francisco, the vast murals depict events in San Francisco history, including the Gold Rush and building of the Union Pacific Railroad, to the 1906 earthquake and fire, the completion of the Golden Gate Bridge, the end of World War II, and ultimately, the signing of the United Nations Charter in San Francisco.

Refregier did not shy away from controversial subjects, including murals that depicted the anti-Chinese Sand Lot riots and the 1934 San Francisco Waterfront Strike.

Perhaps because of his Russian background, some of his graphic portrayals were deemed to have a “Communist” theme and were accused of reflecting negatively on San Francisco’s past. But local artists and museum directors fought government interference and the murals stayed, although Refregier did make some modifications on several panels.

That did not satisfy the House Committee on Public Works which met in 1953 to discuss destruction of the murals on the basis they would convert post office patrons to Communism, among other things. A public outcry, including support from major San Francisco museum directors, saved the murals. Art patrons rallied again in 1979 when the post office abandoned the Mission Street building and succeeded in having the Rincon Annex lobby designated as a city landmark. The murals were restored in 1987 by Thomas Portue.

While the Rincon murals were the last of the arts projects, Coit Tower was the first under the Civil Works Administration’s Public Works of Art Project (PWAP). The murals depicted life in California as envisioned by 26 artists and their assistants one year after the tower opened in 1933. The interior circular tower with its simple planes and lines made it a natural showcase for the proposed frescoes.

Initially, 50 artists submitted sketches for the murals with 26 selected, all of whom worked under the leadership of Russian born artist Victor Arnautoff, who was responsible for the harmony of the work. Begun in January of 1934, the murals have three prevalent themes: industrial production, agricultural and food production, and city life in general.

Like the Refregier murals, some of the Coit Tower murals also generated controversy, fueled by the 1934 Waterfront Strike. Calling government-funded art “socialistic,” local newspapers deemed the project pro-labor. The controversy was heightened by the fact that many of the artists added elements to the murals that were not part of the submitted and approved sketches. In the end, “controversial” elements were removed from some murals and they opened to the public in October of 1934. Among the artists whose bold murals still resonate with the tenor of the times are Bernard Zakheim,. Fred Olmsted, Jr., Otis Oldfield and Clifford Wright. 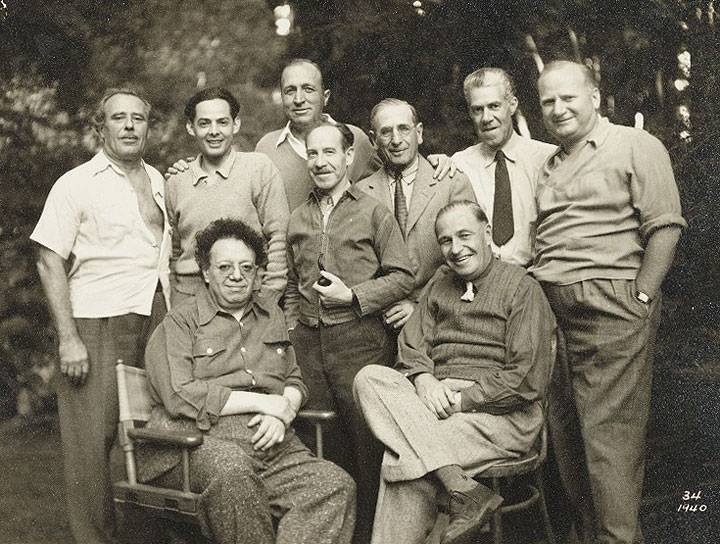 On the western-most edge of the city, two venues provide another look at public art. Golden Gate Park’s Beach Chalet on the Great Highway, a pre-depression building designed by architect Willis Polk, showcases the historic frescoes of Lucien Labaudt. Labaudt, who was born in Paris, had a studio on Powell Street in the 1920s. Unlike other government-sponsored projects, his murals were decidedly non-controversial, depicting idyllic scenes of people enjoying sporting and leisure activities. The artist famously included the faces of many of artists (living and dead), socialites, art patrons, even government arts administrators—all the movers and shakers in the arts scene. The murals even depict Golden Gate Park Superintendent John McLaren and sculptor Beniamino Bufano.

To the south of the Beach Chalet are the Mothers’ House murals at the San Francisco Zoo. The house was originally built in 1925 as a refuge for mothers and children, and served as the Zoo’s gift shop from 1978 to 2002. Two local artists who had been drawing animals at Fleishhacker Zoo (now the SF Zoo), Helen Forbes and Dorothy Puccinelli, applied for funding for a project under the PWAP. Given free reign in choosing their subjects, the two picked Noah and the Ark with the murals covering two 28’ foot walls reaching 12 feet high. An architectural and artistic treasure, the Mothers’ House was designated a National Historic Landmark in 1979.

The murals have stood the test of time except for a section damaged by moisture seeping into the building. Closed in 2002, The Mothers’ House Restoration & Refurbishing Society is now raising funds to restore the murals and reopen the building to the community for multiuse purposes, including education, conservation and research, in addition to small private and public functions.

The Presidio National Park also boasts WPA art in the Presidio‘s Main Chapel, built by the Army in 1930. Arnautoff, director of the Coit Tower murals, and his assistants painted a large fresco in 1935. The mural depics an historical pageant related to the founding of the Presidio and the peacetime activities of the Army and features St. Francis at its center.

All of the muralists working in San Francisco, and indeed throughout the country, were painting under the shadow of Diego Rivera. A lifelong Communist, Rivera highlighted the power of art to convey political and social ideologies. The great Mexican muralist was also a hands-on teacher, introducing hundreds of artists to fresco technique. Several of the WPA artists, including Arnautoff, had traveled to Mexico to work with Rivera. Rivera’s murals are on display in several locales in San Francisco. Although not the product of the WPA or other New Deal projects, Rivera’s murals are an important part of the San Francisco art scene of the 1930s.

Rivera had commissions in San Francisco in 1930-1931 and returned in 1940 to create the Pan American Unity mural for the Golden Gate International Exposition on Treasure Island. Execution of the mural was part of the Exposition’s program of showing artists at work. However, the mural was not completed by the closing of the Exposition on September 29, 1940. Rivera and his assistants continued to work for two months after the Fair closed in the empty exhibit space.

This article originally appeared in Panorama, January–March, 2010 Vol. 22, No. 1, the newsletter of the San Francisco Museum and Historical Society.