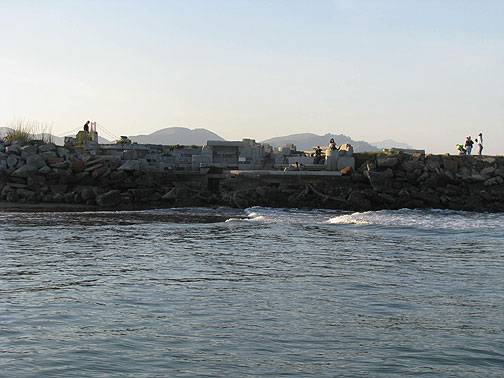 The Wave Organ in the Marina, at the end of the breakwater behind the St. Francis Yacht Club. 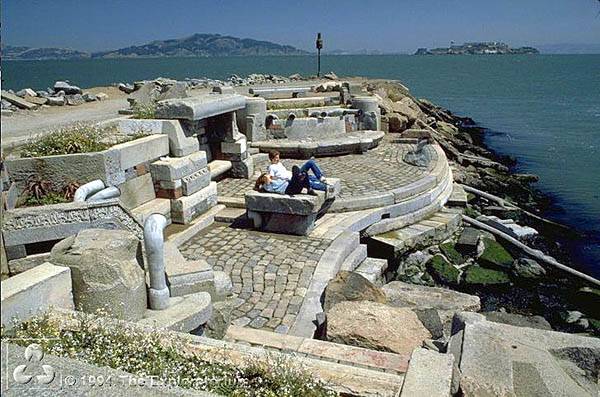 The concept was developed by Peter Richards and was installed in collaboration with sculptor and master stone mason George Gonzales.

The Wave Organ is located on the peninsula that stretches east of the St. Francis Yacht Club. To get there, go west on Marina Boulevard and turn right just after Baker Street, immediately before the entrance to the Presidio. Angle right past the yacht club all the way to the end of the peninsula. The Wave Organ is located on a jetty that forms the small Boat Harbor in the Marina district of San Francisco, walking distance from the Exploratorium.

The jetty itself was constructed with material taken from a demolished cemetery, providing a wonderful assortment of carved granite and marble, which was used in the construction of this piece. The installation includes 25 organ pipes made of PVC and concrete located at various elevations within the site, allowing for the rise and fall of the tides. Sound is created by the impact of waves against the pipe ends and the subsequent movement of the water in and out of the pipes. The sound heard at the site is subtle, requiring visitors to become sensitized to its music, and at the same time to the music of the environment.

Though visually breathtaking, the Wave Organ was built not for the eye, but for the ear. Created by the people who brought you the Exploratorium, the Organ was constructed to capture and amplify the undersea sounds of the Bay's surging, swelling waves. Just press your ear against the openings of the tubes, and listen to the sounds of the sea.