Introduction to The Sixth Star 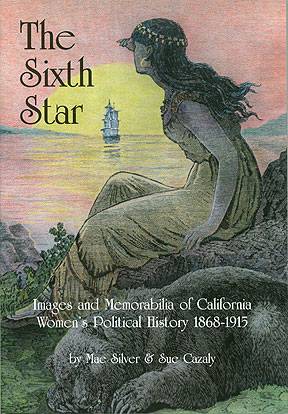 While many books about California politics exist, surprisingly few trace the politics of California women. In the nineteenth century, San Francisco was the seat of the California women's movement, which began in 1868. From that vigorous movement came two benchmark elections, in 1896 and 1911, when California men voted on a woman's suffrage amendment to the state constitution. Aside from Selina Solomons' first hand account, How We Won the Vote in 1911, there is not even one book about the two campaigns for woman's suffrage. Such an omission poorly serves an understanding and appreciation of the women's movement in San Francisco and the subsequent political history of California women. 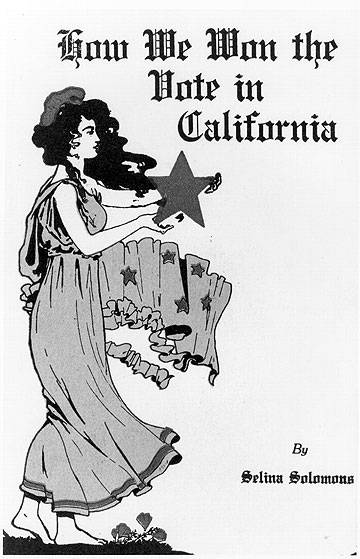 Cover of Selina Solomons' first hand account "How We Won the Vote in 1911".

In addition to mounting two campaigns to win their right to vote, women also challenged certain cultural myths about them and their circumstances. Taken in those days not as myths, but as truths, these myths became arguments to further curtail women's rights in other areas. Myths became legal arguments to exclude women from entrance to an institution of learning or from engaging in certain professions. Other myths explain why women should not have the right to vote. These were the leading myths:

1. A woman is morally superior to man: she, alone, embodies purity and goodness.

2. To engage in politics would taint and soil a woman's purity and goodness and furthermore would unsex her.

3. Women are inferior to men in terms of physical and mental development. 4. Women are more emotional than men.

5. For a woman to run a household, bear and rear children requires little or no education.

6. Every married woman would receive protection and support from her husband. The next and last myth has taken much time to disprove, but during the nineteenth and twentieth centuries it was accepted as truth:

7. If women got the right to vote, they would shut down the liquor industry.

This last myth was a formidable obstacle facing the suffragists of this city. San Francisco had more liquor stores in it than any other city west of the Mississippi. The liquor lobby had a tremendous hold in San Francisco in both centuries. Historically, this coastal city advanced its commercial trade industry through hospitality that included spirits, food and gracious people. As in the early times of the founding of the United States, taverns housed meetings of important people who forged political documents and crafted events crucial to our country's founding. This custom continued in San Francisco as it burst from a sleepy village into a boomtown flooded with gold seekers from all over the world.

In San Francisco the saloon replaced the old tavern as a place to meet, make deals, develop contacts, and conduct business. San Francisco was a party town from its earliest days, and has retained that persona to the present day. Beyond this social custom involving good food and spirits was the fact that the city's economy and tax base became heavily reliant on its flourishing liquor business. The other obstacle placed by San Francisco was the fact that it had a greater population than any city in the west and in the state. Considering the city's powerful liquor interests; its population dominance in the state; and the myth that voting women would shut down the liquor lobby, it was no wonder that the 1896 suffrage amendment failed.

To their credit, suffragists did not inflame the liquor issue by confronting it publicly. What they did underestimate was the population dominance San Francisco exerted over California in 1896. As San Francisco voted, so voted California.

Additional forces and conditions contributed to the success of suffrage in 1911. The affluence gained from an economy fueled by the gold rush and silver strikes provided the families of the suffragists with money and resources for the cause. Women such as Miranda Lux, Jane Stanford, Phoebe Hearst, Mary Sperry, Mary McHenry Keith, Selina Solomons, Jane Knox Goodrich, Sarah Wallis, Laura de Force Gordon, Georgiana Bruce Kirby, Caroline Severance, Clara Shortridge Foltz, Emily Pitts Stevens and Ellen Clark Sargent underwrote California women's suffrage from one century to the next. The continuity of the leadership of these women was indispensable.

The labor union movement, particularly strong and unique in San Francisco, supported women's right to vote. At the Labor Day parade in San Francisco, in September, 1911, Samuel Gompers, head of the American Federation of Labor, publicly endorsed women's suffrage. The only majority vote for woman suffrage in 1911 was from the working class precincts.

At the dawn of the twentieth century, the progressive social-political reform movement in California, personified by such organizations as the anti-saloon associations, the Lincoln-Roosevelt Leagues, and the Nationalist (socialist) Clubs, permeated the state's politics. Almost the entire platform of the Lincoln-Roosevelt League became the proposed amendments to the state constitution voted on in the special election of October 10, 1911. The women's suffrage and women's eight-hour workday amendments passed with most of the other amendments.

When the automobile and the telephone emerged as devices nearly everyone could use, California women used these communication and mobility capabilities, especially in the 1911 suffrage campaign. Particularly, members of the College Equal Suffrage League used their "Blue Liner" open roadster to motor through the countryside and farm towns. When the "Blue Liner" wheeled into town, parked at a corner and a college suffragist stood in the car and began to speak, soon a crowd of men gathered around. The target audience suffragists wanted to reach was men. The car attracted the right audience. This was good public relations. When votes were counted in 1911, college women thanked the California farmer who brought in the majority vote for women.

The telephone compressed this large state into a more manageable campaign system. With quick and efficient communication, the phone saved hours of travel and provided the 1911 suffragists with expanded means to conduct a statewide campaign.

These two political campaigns of 1896 and 1911 were not the only ways women fought for their rights and challenged the myths about them. In California women also founded clubs to discuss these issues and mounted the city's lecterns to disprove the myths. They initiated lawsuits challenging professions and institutions that denied them access. They crafted bills to replace discriminating laws and guided their passage into law. It took determination, energy, patience and time to disprove many of these myths and to gain their rights. Each time a woman challenged a myth, she was political. Following the example of their ancestors who exercised their political acumen even before the Revolutionary War, California women joined the noble endeavor called politics and captured the Sixth Star for the suffragist banner.