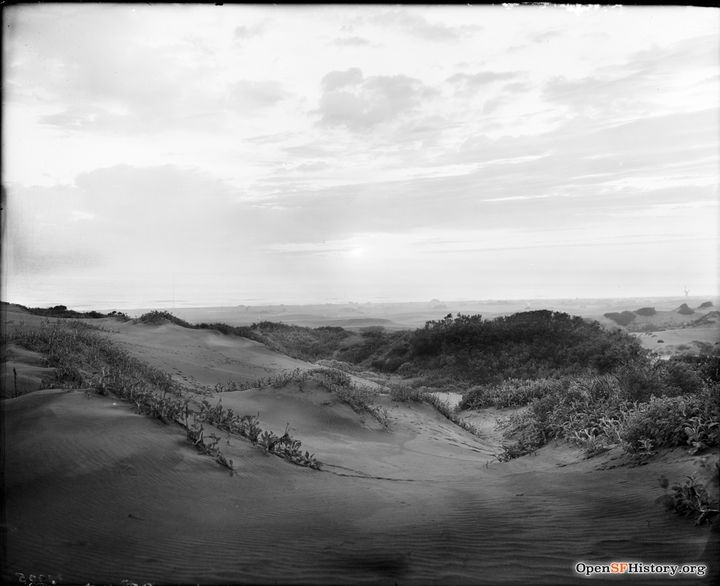 The Sunset district, c. 1910 (windmill in Golden Gate Park is near right edge on horizon)

Sand has been a symbol for desolate and impermanent landscapes since biblical times, when the apostle Matthew upbraided the "foolish man, who built his house upon the sand." San Francisco's own dunes drew the ire of many early visitors to the young city. "There was absolutely no level ground" above the tide flats of the town's harbor, one forty-niner recalled. "There was here and there a little sheltered valley, but immense sand dunes covered what is now the fairest part of the city." Esteban Richardson, grandson of a Presidio comandante, remembered growing up in the early 1840s among "a wilderness of desolate, forbidding sand dunes, often shifting their positions overnight." The massive dunes, some more than 100 feet tall, were replenished and set in motion by the winds that swept unimpeded across the peninsula from the Pacific seven miles to the west. The wind "carried with it an almost incredible burden of both fine and coarse sand that got into clothes, eyes, nose, mouth--anything that was open in short--besides penetrating the innermost recesses of a household."

Builders and real estate speculators could not stop the wind, but by 1849 they began employing huge steam shovels to level the sand hills and fill in the extensive tidal marshes. In the decades that followed, thousands of tons of San Francisco sand was dumped into the bay along the shoreline to "create" additional land for sale. Recent earthquakes have confirmed ancient injunctions against building houses in the sand: filled lands such as the Marina district sustained considerable damage during the 1989 earthquake.

This newly electrified shovel (in 1907) replaced the steam shovel that had done so much to alter the landscape of San Francisco from the mid-19th century, seen in the video below.

A few astute visitors to early San Francisco noticed that "the Great Sand Waste" featured both vegetated and unvegetated dunes. In some areas, particularly on the eastern edge of the peninsula, geologist William P. Blake noted that the "high and steep" sand hills were "covered in most places by a low growth of vegetation, principally shrubs and evergreen and dwarf oaks," referring to stunted forms of the Quercus agrifolia (coast live oak). On the Pacific side, he wrote, the sand dunes were more open. "This sand is moved about by the wind and is constantly progressing inland, being thrown into wave-like hills, which move forward and bury shrubs and trees that lie in their path." Many sand hills, though, were remarkably stable, where thick dune scrub helped minimize the effects of scouring winds. If this scrub was removed, however, as firewood gatherers were doing near the young city, Blake surmised that "the motion of the sand is rapid, and a large hill is soon carried away."