The Old U.S. Mint at 5th and Mission 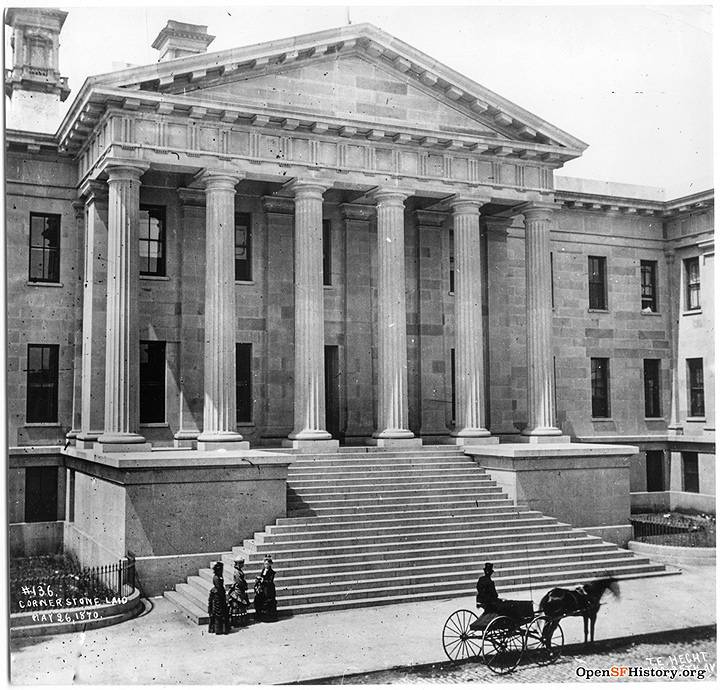 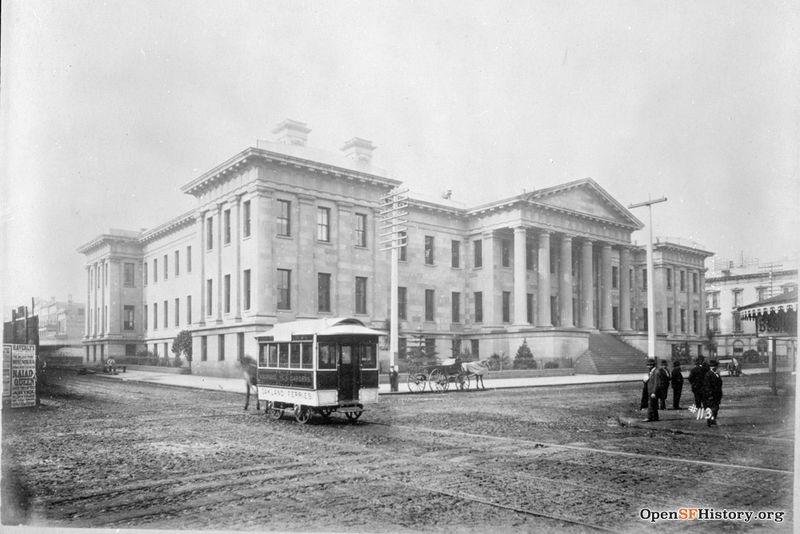 Old Mint in 1883, with a horsecar to Woodward's Gardens in intersection of 5th and Mission. 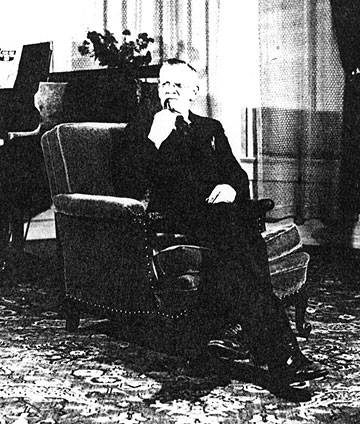 My father, John James Marshall, was born in Liverpool, October 12, 1876. He came to the United States in 1891 at fifteen years of age accompanied by his sister, Jessie. His father who was a widower preceded him by about three years and settled in San Francisco. His name was also John Marshall. At the time he lost his wife in childbirth he already had three young children to care for. This was not at all unusual in those days as I never knew either of my grandmothers each having died under the same circumstances.

John James, the youngest, was sent to relatives in Scotland, his sister Jessie to the Shetland Islands and his eldest sister, Lena traveled with her father to San Francisco where she studied to be a nurse and also kept house for him. While living in Scotland my father, John James, had doting aunts who saw to it that he had the best education available at the time. He attended a boys’ school where by the age of fifteen and before rejoining his father he already had become proficient in Algebra, Geometry, Chemistry, and Mechanical drawing along with other general studies.

Shortly after arrival in California he was enrolled in Abraham Lincoln School, a well-regarded San Francisco School for boys and men. On the advice of a family friend he was encouraged to take courses in electricity. With the many changes going on with a wider use of electricity in all aspects of life in the city there were many opportunities. It required preparation though. He applied himself to work during the day and attending the Mechanics Institute at night.

One of his first jobs was as an electrician’s apprentice for the Thomas Day Electrical Company, known now as Phoenix Day, which was established in 1850. It is one of the oldest businesses in San Francisco. Many of the fine homes on Rincon Hill and Nob Hill were being converted from gas to electricity throughout and the streets were now being lighted also.

At twenty-one years of age he became a bonafide electrician and was hired as such by the Emporium. It was a fine department store on Market Street selling the best of domestic and foreign goods. At its grand opening a gallery of the finest European statuary, oil paintings, and furniture were displayed to attract the new rich San Franciscans who were decorating their large homes and sparing no expense for ornamentation. During his three years at this store he improvised the design and supervised the placement of what was described as the first moving electrical sign in the city. This was an outdoor sign installed over the doorway and entrance to notify its customers of their quality merchandise.

While employed at the Emporium he thought always of making a change to better himself. Much to his surprise an opportunity presented itself when a notice appeared in the daily paper that the United States Mint of San Francisco, which was in the same area as the store, was to be modernized and converted to electricity. Young men with knowledge of installing electricity were urged to register for a Civil Service Examination. Applications could be gotten at the Post Office. Only four men responded to the call and John James was one of those four. The examination lasted for three days, written and oral, with the final day based on personal general knowledge and experience.

In time the result of the test was made by a letter from Washington. John James passed the highest of the four and won the appointment of Electrician of the U.S. Mint of San Francisco. He was declared the most qualified. It was customary that many such appointments were often political with appointees backed up by prominent men particularly elected Legislators. He did not have recommendations from any Senator or Congressman but merited the position on his own qualifications. 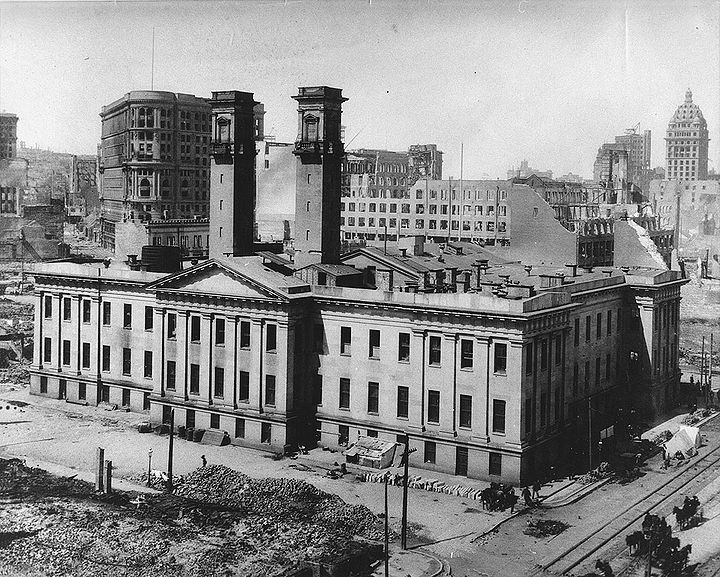 Western side of the Old Mint on Mint Street and Mission, apx. May 1906.

In 1900 when Mr. Frank Leach was the Mint Superintendent there was also to be a change from steam power to electricity with a projected time line for completion of three years. This was an important assignment for my father as Electrician. It was done on schedule with great praise from Mr. Leach due to the fact that at 24 years of age he was the youngest head of a department in the entire Mint service.

In 1902 he married my mother, Mabel Melody, a native San Franciscan. They moved into a third floor Flat located on Steiner Street not too far from the Mint which was at Fifth and Mission Street. On the morning of the 1906 Earthquake and Fire, he rescued his wife and eighteen month old daughter, Alice, after crawling under a huge beam that had come though the wall from an adjoining flat and blocked the third floor stairway to the street. Because of the disaster and as a loyal government employee he felt it imperative to get to the Mint as soon as possible. He managed to do this within two hours. He had reluctantly turned over his little family to the care of a family group of total strangers to whom he had related his dilemma. They assured him of their good will and a promise to watch over them until contact could be made with family relatives.

Hurrying down Market to Fifth Street amid terrible destruction and chaos he did not know that it would be some times before he would see his wife and child. Although the Mint had its own water supply, fire raged on the roof. Many brave workers including my father fought the fire until it was finally quenched.

The Mint was the only building left standing in a wide area. For several months it was required that my father’s duty as Electrician was to continue to live there with other workers due to the important nature of their jobs. During the aftermath and within a few days of the quake, his first task was to cleverly convert a steam generator to electricity. Thus the Mint became the only beacon of light in the surrounding devastated neighborhood giving a great deal of comfort to all.

In 1915 The Panama Pacific International Exposition was held in San Francisco. One building was the Machinery building. The U.S. Mint had a display there regarding minting, which my father helped arrange.

No man loved the Mint more than he. He considered it an honor and privilege to work in this beautiful old building. He admired the fine craftsmanship of early day construction. He appreciated and valued the lovely fireplaces for warmth, the fine furniture and the impressive details of the etched hardware. He had great admiration for Mr. Frank Leach, the Superintendent, always a gentleman and a fine administrator.

Some years before World War II he had been promoted to the position of Superintendent of Machinery. One responsibility of his during war time was to see that large shipments of gold were taken to more secure areas of the country.

When there was talk of a New Mint he had moments of doubt about the need for such an action. There were several possible sites considered for this new building but all in all he felt its present site was still the best for those financial institutions its served. At the time I was growing up my father has taken over an extra bedroom for his books, drafting table and blue prints. He worked there constantly, especially when the new Mint was being constructed. He was in charge of the placement of the Machinery that was to be installed. Although, he, as Superintendent of Machinery, worked diligently on the plans assigned to him he grieved at the prospect of the abandonment of such a great monument with an unequaled historical past. It would warm his heart to know that now his “Granite Lady” is to be brought back to life having once more escaped demolition. 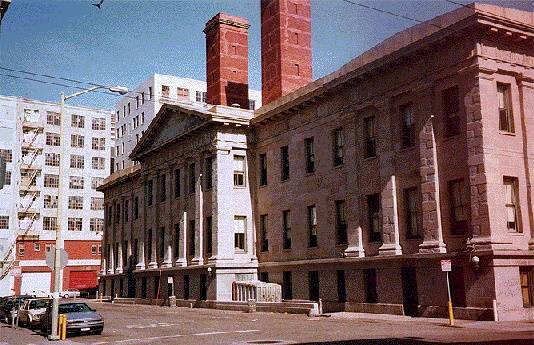 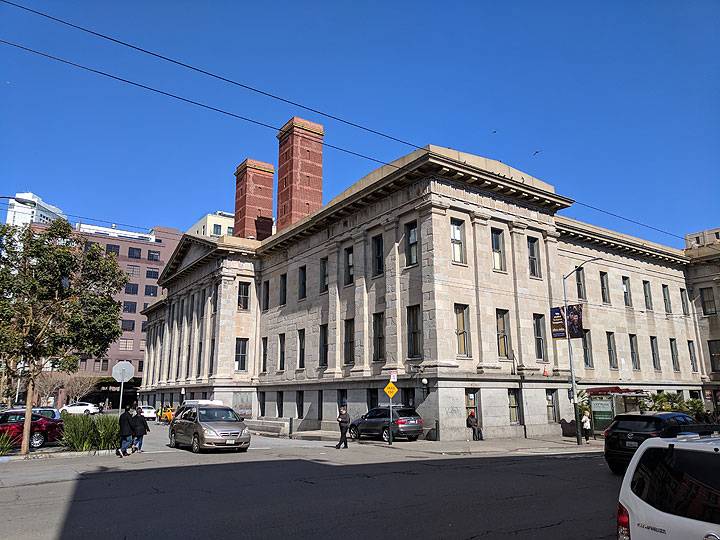 Where Devil's Dictionary Author Sold His Soul for Coin

Old U.S. Mint, 88 Fifth Street at Mission. After spending three years making his literary mark in England, Ambrose Bierce returned to San Francisco in 1875. Like many a writer after him, Bierce discovered that "making a living in San Francisco by freelancing was next to impossible" and went to work at the Mint. John Dillinger's explanation of why he robbed banks "That's where the money is" was presumably also Bierce's excuse.

The historic building was converted into a museum in 1973, but was closed in 1994.