The Little Girl in the Window 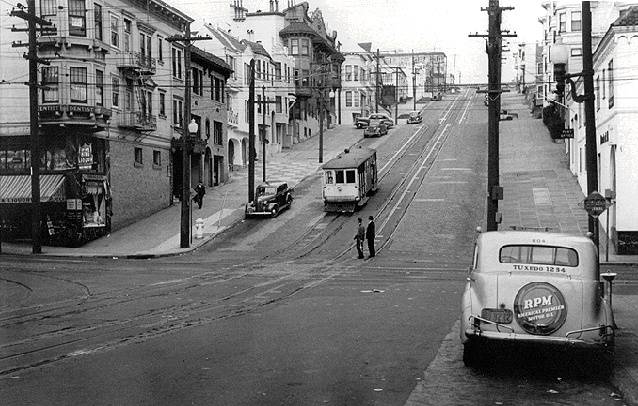 Cable Cars traversed the hill between Noe Valley and Eureka Valley (the Castro) until they were "modernized" out of existence in the 1940s. Here a cable cars is heading south along Castro at 24th Street. 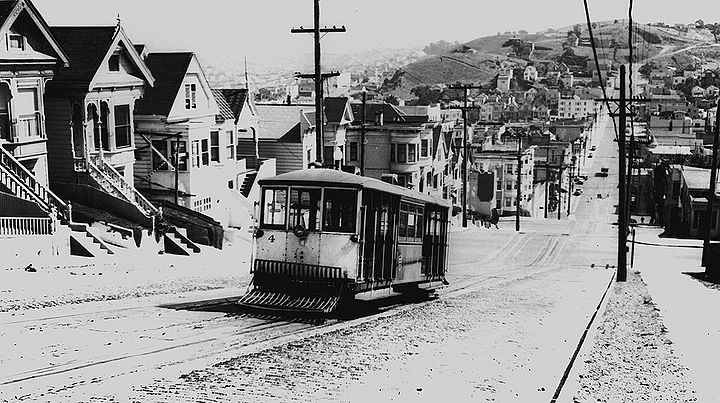 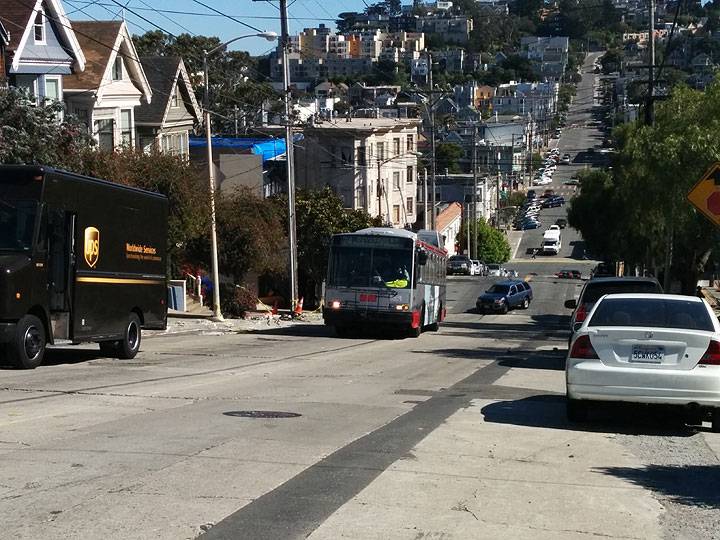 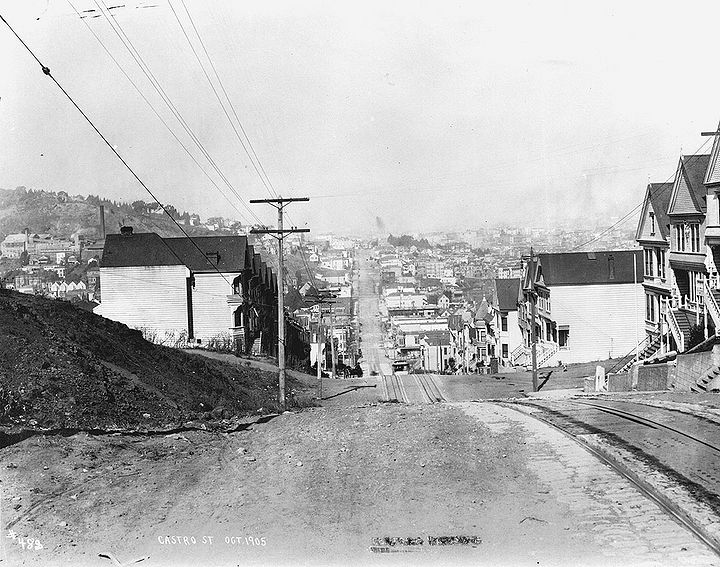 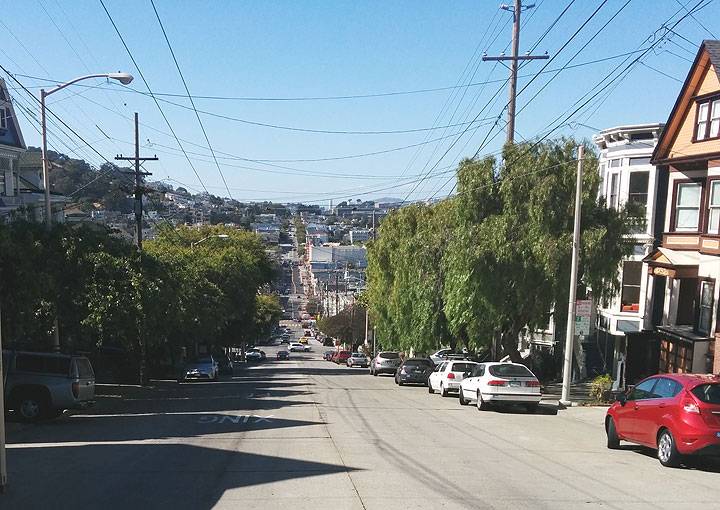 My mother-in-law, Marie Beban, loved to tell stories about the "good old days". She'd start on one story and would verbally meander through several. Sometimes it was difficult to follow her train of thought, but I found it fun anyway.

Early on in my marriage to my husband, Bob, she told us about the time her husband, Bob Sr. was a conductor on the Castro Street cable car line in the '30s. The cable cars (we kids ailed them "Dinkies" because they were so small) traveled from 18th and Castro, up over the big hill to 26th where the turntable would rotate them so that they could travel back and start all over again. 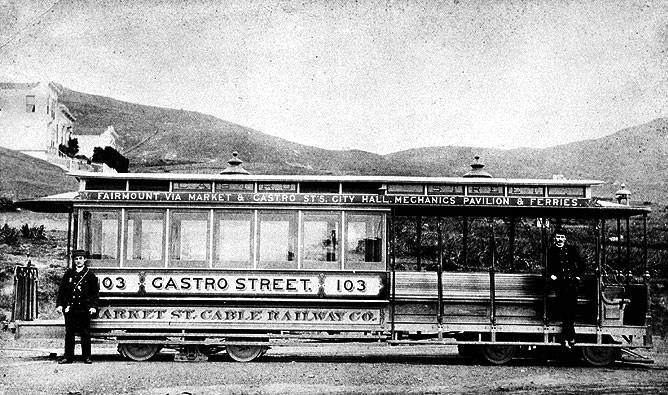 Panoramic of Castro Street carhouse, October 1928, at Castro and Jersey where the Walgreens and parking lot are now.

Marie said that there was a period of time when Bob Sr. came home and told the family about a little girl who waved to the cars from a big bay window at the corner of 23rd and Castro. He said he never saw her outside and thought that she was bedridden because she seemed to kneel at the window to wave. He thought that she was probably four or five. He said that she looked sad and sickly and told his children more than once that they should feel grateful that they were healthy and to stop complaining about whether or not they liked vegetables. (You know the way parents do go on!)

As she was relating the story, my eyes got bigger and bigger. When she was finished, I said, "Mom, that little girl was me!"

My husband said, "You? I married the little girl in the window? Do you have any idea how often you were held over our heads? If we acted up, Dad would say stuff like, 'You don't know how lucky you are. There are kids worse off than you, like the little girl I see every day in that big bay window.' I can't believe that I married that little girl." We had a good laugh. I then told them the story of my illness.

Just before my fifth birthday my appendix burst. Peritonitus set in. I was rushed to San Francisco General Hospital (a scary place to me even to this day) where I spent six agonizing weeks undergoing thirteen operations. While in the hospital I contracted scarlet fever. It was an experience that I can still recall vividly. It was horrible but the doctors and nurses (and my family's prayers) saved my life.

I was allowed to go home only after my mother bought an electric refrigerator. We'd had an ice box prior to that. (Ah! I can remember the ice man delivering ice and us kids "stealing" ice from the back of the truck. Such fun!) The need for the refrigerator however was to have ice cubes available at all times for packs on my incisions.

I was brought home to a bottom flat at 23rd and Castro ... right on the corner. Because the doctor said that I needed sunshine, my bed was placed in the front room, right in the bay window where the sunlight could warm me most of the day. I was pretty weak and so, spent my time looking at pictures in the BIG LITTLE books my grandfather used to buy me at Woolworth's. I was often bored and slept a lot. The highlight of every day though, was watching the Dinkies go up and down the hill. Every time I heard one coming I would get on my knees and wave. Some of the people waved back .... some didn't. But there was one man, whom I thought owned the Dinky, that always smiled and waved and always clanged the bell. He didn't know it but he became my friend.

Through the months I became stronger and then it was time to start kindergarten. My illness was left behind and, unfortunately, so was my friend. Little did this little girl know that my friend would one day be my father-in-law.

Unfortunately, Bob Sr, died of a heart attack at the age of 48. How I wish I could have reminisced with him. It is my loss.

P.S. The more my husband and I talked about those early days the more we discovered. i.e..... As a boy, Bob lived at 225 Jersey Street, just a couple of blocks from where I lived. We found out that we used to go to the old Palmer and Castro Theaters on the same Saturdays. (Ten cents to get in and five cents for candy!) And my mother bought coal at the coal yard where his dad worked for awhile.. It was obvious that our karma was meant for us to meet, fall in love and marry 'til death we did part. 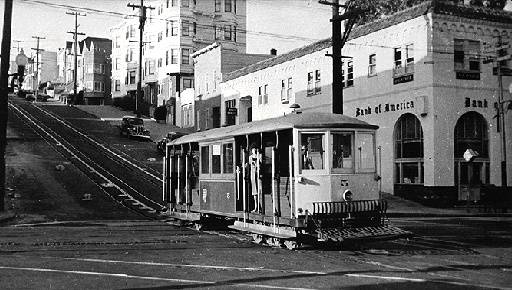 A cable car heading south along Castro at 24th Street. 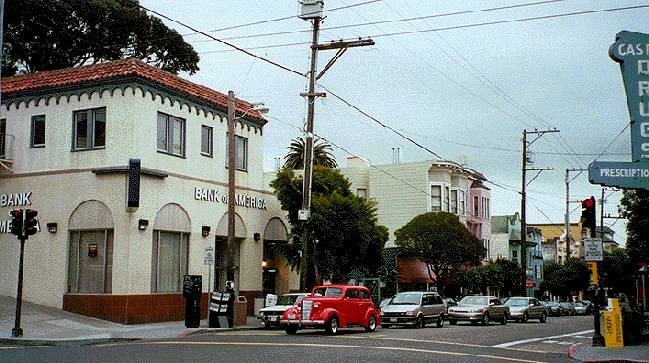