The Legacy of the SLA 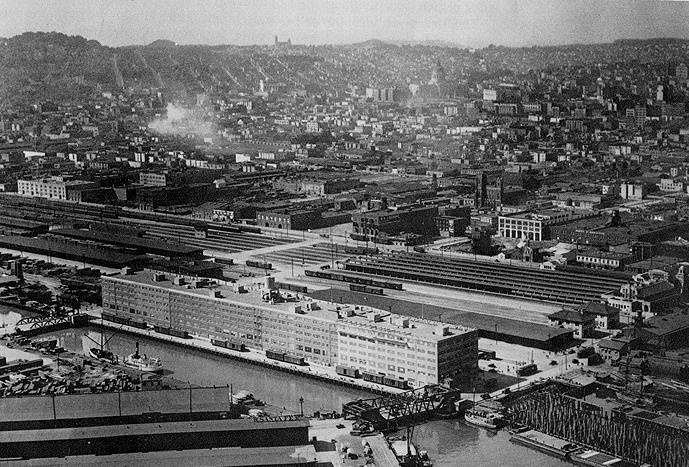 This c. 1970s photo shows the Del Monte building (long building in the lower center) along Mission Creek between 3rd and 4th. It was built as a banana processing plant in the 1920s, but in 1974 this same building was the site of the Hearst food giveaway in response to ransom demands by the SLA.

THE KIDNAPPING of Patricia Hearst by the SLA in February 1974 set off a series of events that transformed local politics in San Francisco. Those events had nothing to do with either the SLA or its demented, suicidal "program," which held the press, politicians, and political groupies enthralled. Instead, they centered on the actions of community-based organizations to fashion a large-scale response to an impending disaster in lower-income neighborhoods throughout the city, and on the lessons those groups learned and then applied.

The SLA demanded that the Hearst Corporation undertake a massive food distribution program throughout California as a condition of the release of the kidnapped heiress. Hearst agreed and threw together an effort that, by Feb. 22, made its first "distribution," limited to San Francisco.

It was a disorganized disaster. Scores of people were injured as panicked workers threw boxes of food off moving trucks as huge crowds of people unexpectedly showed up for the food. The size of the crowds shocked the media and so upset Gov. Ronald Reagan that he stated, "It's just too bad we can't have an epidemic of botulism."

The SLA issued a "communique" the next day demanding that a "community coalition" be put in charge of the effort under the leadership of a small, community-based organization called the Western Addition Project Area Committee (WAPAC).

Hearst's agreement to distribute food was condemned by the establishment and viewed with suspicion by the "clean hands" left. He was seen as giving in to "terrorists" and was shunned by local, state, and national officials--there was no Red Cross, no United Way offers of help--just agents, cops, and ops of every sort watching.

Only state senator George Moscone and Assembly member Willie Brown were willing to help (Moscone loaned a staff nutritionist to inspect the food, and Brown agreed to serve as a trustee of the $4 million trust fund created to pay for the distribution). The easy chair East Bay "left" feared that the SLA was a police front and, in its usual Berkeley bullshit manner, remained aloof.

The media was everywhere., getting things wrong at both 6 and 11. From Feb. 26 to the end of March, the WAPAC-led Community Food Coalition managed the Hearst food program, organizing six distributions, which handed out more than 100,000 bags of groceries at some 16 locations across four counties. There were no more injuries, no more riots, and no outbreak of "botulism."

The operation was centered at the huge China Basin building on Townsend Street. Scores of trucks were coming and going every hour. Father and brother Hearst were there 24 hours a day, talking on the phone, fending off self-serving promoters and hustlers, and forced by food suppliers and distributors to pay top dollar. It was an eye-opener for the community folks: capitalists will compete to sell rope to hang one another. Slowly Community Coalition members took over the operation and earned Hearst's trust and respect.

More important, they earned one another's trust and respect, learning how to work together across race and community lines. Within three months, the core members of the Community Coalition formed the Coalition to Register 100,000 voters, registering enough voters to elect George Moscone mayor of San Francisco.

Those same groups pulled together a Community Congress in June 1975 and a year later were at the center of the successful campaign for district elections of supervisors.

Within two years, some had begun the creation of community-based non-profit housing development corporations, building affordable housing for many of the people in those long lines seeking free food. Others went on to transform the urban environmental movement in San Francisco, redirecting it toward limiting high-rise development and demanding developer payments for child care and public transit. The "neighborhood movement" that dominated the political agenda of San Francisco through the early 1990s was born during those two insane months in 1974.

Calvin Welch was a volunteer with the WAPAC Community Food Coalition and staffed the site at the old Safeway on Fell and Broderick, where, on March 25, 1974, some 2,000 people lined up for food at 7 a.m.